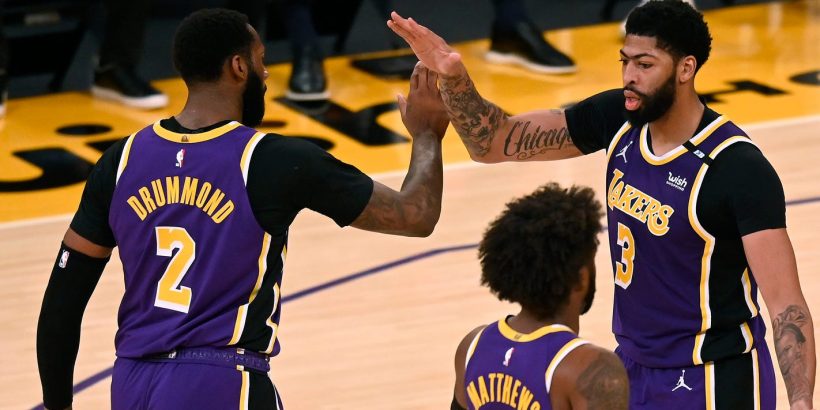 The defending NBA champions likely didn't envision themselves "playing desperate" in the final week of the regular season.

Talen Horton-Tucker's clutch 3 with 20 seconds left gave the Lakers a 101-99 win over the New York Knicks at Staples Center. The Lakers remain in seventh place in the Western Conference, but they pulled within a game of the Portland Trail Blazers and Dallas Mavericks in the standings and boosted their hopes of avoiding the play-in tournament.

"We know the position we are in. We are playing desperate," said Anthony Davis. "That is all we can do. This win is a confidence booster for us. If LeBron comes back tomorrow, hopefully we can get him acclimated and back in the rhythm. We want him to get healthy and be ready for the playoffs."

[email protected] had another nice night for the #LakeShow (20 PTS, 6 REB, 4 AST). He spoke post-game with @LakersReporter about tonight’s battle with New York, THT’s game-winner, and more. pic.twitter.com/CaFtFN0z6N

The playoffs begin on May 22, with the play-in games beginning next Tuesday. The Lakers have three games left in the regular season to claim a top-six seed and a guaranteed spot in the first round.

Climbing out of play-in position won't be easy, but there is a pathway for the Lakers. It starts with winning out and includes getting some help. Los Angeles needs to go 3-0 the rest of the way. Because the Blazers and Mavericks both have the head-to-head tiebreaker on them, the Lakers need either Portland or Dallas to go 1-2 or worse.

Pulling out the win Tuesday was a gutsy endeavor. Shorthanded and banged-up, the Lakers ran up against a Knicks team eager to clinch it's first playoff berth in nearly a decade. Davis, who played his 11th game since returning from a two-month injury absence, admitted a sore groin hampered him.

"The groin got a little tight, but there was no way I was coming out the game," Davis said. "It was a huge game for us and I didn't want to come out no matter the injury and finish the game and make sure we secured the win."

Horton-Tucker being in position for the game-winner was emblematic of the desperation Davis mentioned. With James and Dennis Schröder out, Horton-Tucker saw more minutes at point guard down the stretch

"The thing we talk about all the time is being a team-first team," Lakers coach Frank Vogel said." That everybody matters, everybody's got to stay ready. That's never been more true than the last couple weeks when guys were called upon where they weren't expecting it and they come in and step up."

Here are four more things to know today in the NBA:

For the second night in a row, the Golden State Warriors rallied for a win over one of the top teams in the Western Conference. They closed on a 12-3 run Tuesday for a 122-116 win over the second-place Phoenix Suns. On Monday, the Warriors downed the West-leading Utah Jazz 119-116 that clinched a spot in the play-in tournament. Golden State remains in eighth place in the West, a half-game ahead of the Memphis Grizzlies with two to go. The wins are especially impressive considering Steph Curry, the NBA's leading scorer, has shot 4-of-24 (16.7%) from 3-point range.

"These last two games have been so important for us against the two teams with the best records in the league," said Warriors coach Steve Kerr, "Tonight felt like a playoff game. Phoenix was very well-prepared, they had the day off yesterday, so they came out with a great game plan to take the ball out of Steph's hands."

Dray shuts down any idea of “We Believe 2.0” pic.twitter.com/FPbPSmPitK

The Brooklyn Nets are getting one star back on the floor, while another star's status is uncertain yet again. Kyrie Irving left Tuesday's 115-107 win against the Chicago Bulls with a facial contusion after taking an inadvertent elbow from Nikola Vucevic. The two collided while going for a rebound during the third quarter, and Irving stayed down for several minutes before heading to the locker room on his own. Nets coach Steve Nash said an initial X-ray was "inconclusive," but Irving showed "no signs of a concussion."

"The good news is there are no concussion symptoms, but we'll have to re-evaluate when we get the second scan," said Nash, who added Irving will undergo a second X-ray.

Earlier Tuesday, Nash provided an update on James Harden and said the All-Star guard continues to make positive strides towards returning from a hamstring injury. Harden is reportedly expected to be a game-time decision for the Nets' game Wednesday.

Kyrie Irving suffered a facial contusion and is out for the rest of the game after taking a hard elbow to the face from Nikola Vucevic. pic.twitter.com/KnVTukCHu9

With the regular season winding down, debate over the year's awards will pick up. Utah Jazz center Rudy Gobert is the favorite to win Defensive Player of the Year for the third time in his career. Philadelphia 76ers guard Ben Simmons and Indiana Pacers center Myles Turner are also top candidates. Miami Heat center Bam Adebayo thinks he should also be in the discussion. Speaking with the "NBA on TNT" crew Tuesday after Miami's 129-121 win over the Boston Celtics, Adebayo closed his interview with the simple reason he feels he is the Defensive Player of the Year.

"I do everything on defense," he said. "And I’m going to walk out on that one."

“I do everything on defense. And I’m going to walk out on that one.” 👀@Bam1of1 thinks he should be DPOY. pic.twitter.com/DsWftWp9AT

Game of the night: Blazers at Jazz

Portland is one of the hottest teams in league entering the final days, having won eight of nine to climb to fifth place in the Western Conference. The Blazers don't have much room for error as they try to hold off the Mavericks and Lakers and avoid falling to the play-in tournament. Their tough closing stretch begins Wednesday in Utah, where the Jazz are trying to hold off the Suns for the No. 1 seed in the West. The Jazz have a two-game lead but learned Tuesday that All-Star guard Donovan Mitchell will miss the final three games of the regular season while recovering from a sprained right ankle.