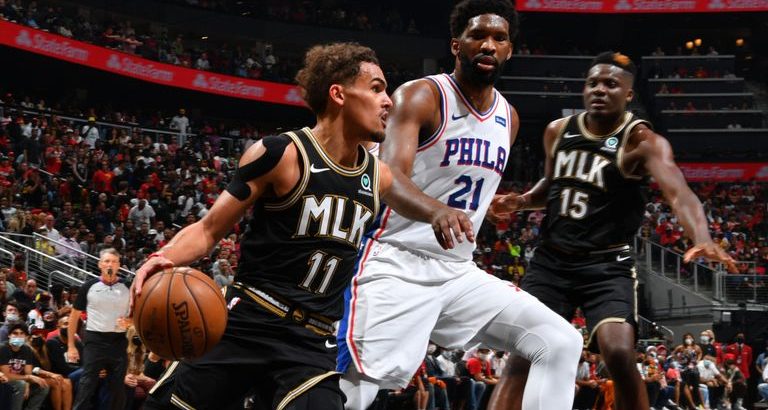 After a gruelling 72-game marathon and nearly two rounds of the playoffs, it all comes down to a one-game sprint for the Atlanta Hawks and Philadelphia 76ers.

The fifth-seeded Hawks visit the top-seeded 76ers on Sunday night in Game 7 of their Eastern Conference semi-final series.

The winner will advance to the Eastern Conference finals. The loser will head into the offseason.

The 76ers staved off elimination with a hard-fought 104-99 win in Atlanta on Friday night.

“It’s fun. It’s a lot of fun,” said Seth Curry, who highlighted his 24-point performance by making six 3-pointers. “That’s a great team over there. You’ve just got to weather the storm and come back at them at the other end.”

Joel Embiid collected 22 points and 13 rebounds while continuing to play through a small lateral meniscus tear in his right knee.

Embiid’s frustration, however, was evident after he felt he wasn’t receiving enough foul calls from the referees. Embiid and John Collins nearly ended up in a tussle behind the basket.

“I just want it called both ways,” Embiid said. “If we are going to call something like nothing on their point guard (Trae Young), it should be the same way when they call the same thing on me if I get touched.”

The Sixers last reached the Eastern Conference finals in 2001, when they ousted the Milwaukee Bucks in seven games.

“The guys are ready to play,” Sixers head coach Doc Rivers said. The surprising Hawks dispatched the New York Knicks in five games in the opening round.

The Hawks won twice in New York in that round and have done the same in Philadelphia in this series.

“To be honest, I don’t think any of that matters,” said Young, who had 34 points and 12 assists on Friday. “It’s one game. They came in and took care of business to force a Game 7. All the other games don’t mean anything. Both teams are in win-or-go-home situations.”

The Hawks, who are already without De’Andre Hunter with a right knee injury, could also be without Bogdan Bogdanovic. Bogdanovic left in the fourth quarter with right knee soreness and was side-lined for the rest of the game.

Coach Nate McMillan on Saturday said he was uncertain of Bogdanovic’s status for Game 7, per the Atlanta Journal-Constitution.

The Hawks likely will need Bogdanovic and others to shoot well from beyond the 3-point arc if they wish to advance. On Friday, the Hawks made only 10 from beyond the arc and missed 11 of 24 free-throw attempts.

“It feels like we haven’t shot well really since Game 1,” Atlanta’s Kevin Huerter said. “We have to get that rhythm back. We made a couple of late threes that put us in a one-possession game late in the fourth quarter. Obviously, we couldn’t hit one in the big moments to close this thing out.”

The Hawks made a franchise playoff-record 20 3-pointers in the series opener. But in a deciding Game 7, the Hawks simply need to do just enough to win.

“I think guys are getting a lot of good looks and good shots,” Young said. “They’re just not making them.”