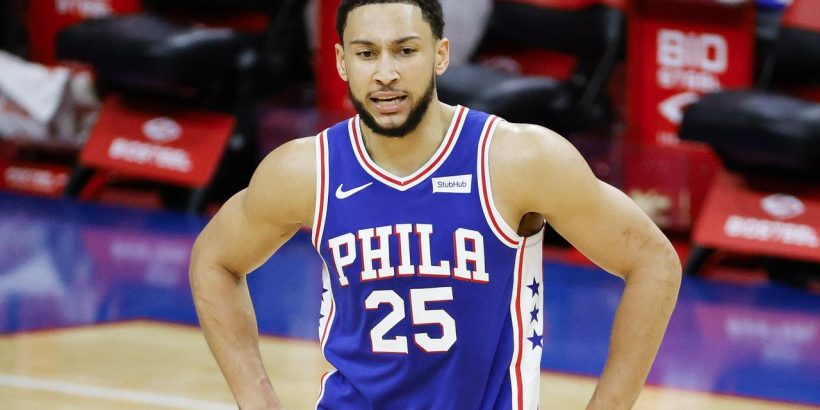 Ben Simmons’ future in Philadelphia is being discussed by those deciding it.

Paul spoke with 76ers’ president of basketball operations Daryl Morey and general manager Elton Brand at the NBA combine in Chicago about the possibility of a trade. No official trade request was made, but the two sides talked about many possibilities.

Simmons is still in the middle of a contract that will see him earn a further $180 million before it expires in 2025 when he becomes an unrestricted free agent.

The trade talks come after Simmons had a horrendous postseason. The former No. 1 pick had a four-game stretch where he refused to shoot the ball in the fourth quarter. He also made playoff history when he shot 34.2% from the free-throw line, which is now the lowest in NBA history.

Simmons had a horrendous playoffs performance against Atlanta.Source:AFP

Despite the rumours, head coach Doc Rivers still thinks highly of Simmons. Rivers has created a plan for Simmons’ to regain his confidence.

“I think some of the stuff is obvious,” Rivers said earlier this week. “We’re not hiding that Ben has to become a better free-throw shooter, and a more confident free-throw shooter. If that happens, I really believe a lot of the other parts of his game will follow. I said that before the season started. The first thing I said was, ‘We got to get him to the line 10 times a night.’ So, we’ve got to put in work so he can get there. But if we can get him there, man, his game goes to a different level.”

The 24-year-old has years to work on his game and develop his potential. That potential will make the Sixers’ front office reluctant to trade Simmons, whose defensive ability and playmaking pushed his path to stardom. Sources told ESPN Morey is hesitant to break up the pair of Embiid and Simmons and hopes to continue “the process” started by his predecessors.

“We have a very strong group we believe in,” Morey said. “None of us can predict the future of what’s going to happen in any, in any place. We love what Ben brings, we love what Joel brings, we love what Tobias [Harris] brings. In terms of what’s next, we’re going to do what’s best for the 76ers to give us the best chance to win the championship with every single player on the roster.”

Senior ESPN reporter Zach Lowe reported earlier this week Simmons’ reputation has taken a real hit from the 2021 playoffs and that there’s almost an air of inevitability that he will be traded by Philadelphia in the off-season.

“There’s no sugar-coating it — the Simmons thing is an ongoing disaster unfolding on a national stage,” Lowe said on ESPN’s Get Up.

“The bottom line is the only time the Sixers looked like a real championship threat was when Jimmy Butler was there for that one season and they pushed Toronto to the limit in the Kawhi (Leonard) shot game. They haven’t looked that way since. Ben Simmons does a lot of great things but offensively he’s just disappeared.”

Lowe said the Sixers will be forced to take a desperate trade to get Simmons out of town and will likely get very little back in return.

“Unfortunately for the Sixers, the other 29 general managers, they all watched the playoffs,” Lowe said.

“They all saw all of this too, so they are in a really tough spot.”

Windhorst’s latest report suggests their might be just enough interest in Simmons from across the league to spark a bidding war that will see Philadelphia secure a significant return on their investment in the Aussie star.