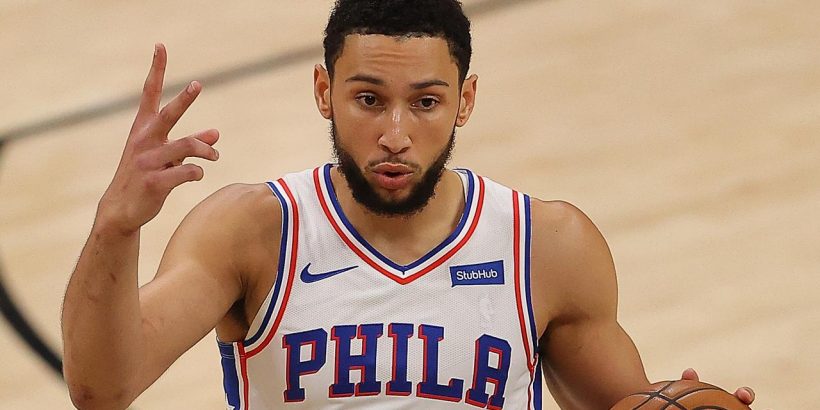 Aussie Ben Simmons is falling apart in the NBA Playoffs with his saddest half of basketball in the NBA.

The Sixers star was the biggest weakness as his team went behind by double-digits early before they found a spark with Simmons sitting on the bench to trail 51-47 at half time in their Easter Conference semi-final series against Atlanta.

Seth Curry caught fire early in the third quarter to push the Sixers to a 61-53 lead.

In an elimination game with the Sixers trailing 3-2 in the best-of-seven series, Simmons was ice cold, tentative and nonchalant as he put up two points, two rebounds and one assist.

Thankfully for him and his team, he was forced from the floor with early foul trouble limiting him to just eight minutes of court time.

The most damning stat of the first half was the Sixers being -15 with him on the floor.

In a half where Philadelphia’s biggest stars all struggled, Simmons was the standout flop.

Joel Embiid had 11 points shooting at just 36 per cent. Tobias Harris had 10 points.

Ben Simmons is under the microscope again.Source:AFP

Simmons’ woeful start in the team’s biggest game of the season had Philadelphia commentators blowing up and calling for the Aussie to be traded. It came after fingers were pointed at Simmons after Philadelphia’s terrible choke to lose Game 5.

Even Aussie comedian Dave Hughes was calling for Simmons to wake up.

“Ben Simmons has gotta start driving to the rim or he may as well hit the showers,” Hughes posted on Twitter.

“Come on @BenSimmons25. Make this your half! Attack that rim.”

The Philly locals were much more scathing.

At least Ben Simmons is trying to foul out. That will make this game somewhat easier to watch.

Ben Simmons: Can’t make me shoot free throws if I foul out 🤷🏻‍♂️

Embiid and Simmons are playing some horrendous basketball thus far.

The Sixers had led the series 2-1, but headed into Game 6 in Atlanta needing to win to keep their season alive.

Simmons also struggled in Game 5 as the Sixers blew an 18-point lead at three-quarter time.

Simmons is shooting at 32.8 per cent from the free-throw line this post-season, missing 44 in total.