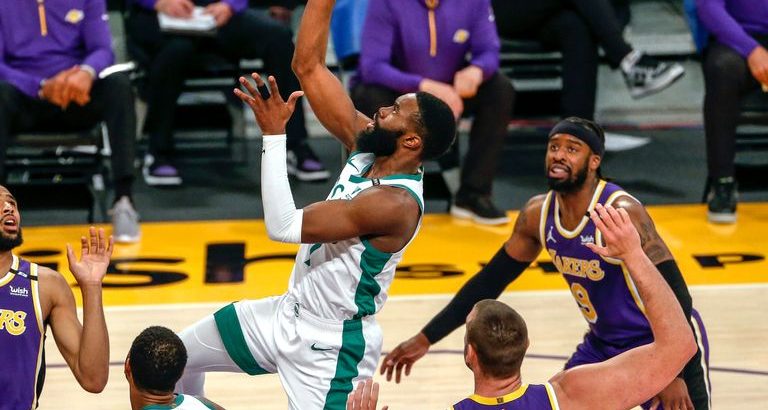 Boston Celtics dominated the LA Lakers to gain revenge for a January defeat and record a fifth straight win to keep pace at the top of the Eastern Conference. Also on Thursday night, Giannis Antetokounmpo return from a six-game injury absence, Steph Curry had another 30-point night and Phoenix joined Utah in hitting 40 wins.

The @Bucks, @warriors, @Suns and @celtics win on Thursday!

➡️ Teams ranked 7-10 will participate in the NBA Play-In Tournament after the regular season (May 18-21) to secure the final two spots in the Playoffs for each conference. pic.twitter.com/kzNDa6qOs8

Jaylen Brown scored 40 points and grabbed nine rebounds as the Boston Celtics closed out a perfect road trip with a 121-113 victory over the Los Angeles Lakers.

The Celtics, who finished 3-0 on the trek and earned their fifth straight win overall, never trailed in the game, leading by as many as 27 points early in the fourth quarter before the Lakers’ bench made the final margin closer.

Brown finished 17 of 20 from the field and at one point made 11 consecutive shots, while Boston’s Marcus Smart and Payton Pritchard each scored 15 points.

Jaylen Brown (40 PTS on 17-20 FGM) is the first player in @celtics history to score 40+ PTS with a field-goal percentage of 85% or better. pic.twitter.com/5XBdnwo8ck

The Lakers allowed fans into Staples Center for the first time this season, but the 1,915 in attendance didn’t have much to cheer about early on as the Celtics raced out to a 14-2 lead and never looked back.

Boston avenged a 96-95 home defeat against Los Angeles on January 30 and won for the seventh time in eight games overall, while the Lakers have now lost five of their past nine games.

A balanced scoring effort, with seven Bucks scoring in double figures, powered Milwaukee to a lead they held almost the entire night, grabbing a third successive win, while inflicting just a second defeat in the last nine on the Hawks.

The advantage grew to as many 19 points before a 15-4 Atlanta run in the fourth quarter pulled the Hawks to within eight points.

Trae Young, returning from a calf injury that sidelined him for two games, scored four of his 15 points to cap the Hawks burst. Milwaukee responded with a quick, 7-0 surge of their own that effectively put the game away.

Jrue put in some work:

Pat Connaughton connected on one of his four made 3-pointers during the Bucks’ run. He finished with 14 points and eight rebounds off the bench.

Giannis Antetokounmpo returned from a six-game absence with a knee injury to score 15 points, almost 14 fewer than his season average. Milwaukee’s second-leading scorer on the campaign, Khris Middleton, finished with 10 points – fewer than half of his average. He added nine rebounds and seven assists.

Bogdan Bogdanovic led all scorers with 28 points. Solomon Hill added a season-high 18 points, and Clint Capela registered a double-double with 16 points and a game-high 16 rebounds.

Deandre Ayton scored 26 points on 10 of 11 shooting and collected 11 rebounds to lead the red-hot Phoenix Suns to a 122-114 victory over the visiting Sacramento Kings.

Devin Booker added 23 points as Phoenix won their fourth straight contest and 14th in their last 16 games. The Suns (40-15) became the second NBA team to reach 40 victories this season, following the Utah Jazz (41).

[email protected] has 40 assists and 1 turnover over in his last 4 games. pic.twitter.com/LIPT9bGRjW

De’Aaron Fox registered 27 points and eight assists, but the Kings fell to match their season-worst losing run of nine games, which they also fell to in February. Buddy Hield added 24 points and Delon Wright had 16.

Harrison Barnes scored 14 points, Tyrese Haliburton added 12 and Hassan Whiteside contributed 11 points and 10 rebounds for Sacramento, who made 55.1 per cent of their shots and were 14 of 30 from behind the arc.

Stephen Curry once again led the Golden State Warriors, scoring 33 points in a 119-101 victory over the host Cleveland Cavaliers on Thursday night.

Despite struggling early from 3-point range (4-for-13 for the game), Curry recorded his ninth consecutive game with 30-plus points to help the Warriors secure their fourth consecutive win and fifth in their past six games.

Collin Sexton returned after missing the previous two games with a left groin strain and led the Cavaliers with 30 points but Cleveland lost for the third time in its past four games.

Curry dealt with frequent double teams on defense by the Cavaliers and shot 12-for-25 overall as he attacked the basket more often to break the perimeter pressure; he also finished with five assists, four rebounds and two blocks.

Andrew Wiggins poured in 23 points, six rebounds and six assists, and Juan Toscano-Anderson finished with a career-high 20 points on 8-of-9 shooting.

After trailing throughout the first quarter, the Warriors took the lead on their second bucket of the second quarter and never trailed again.