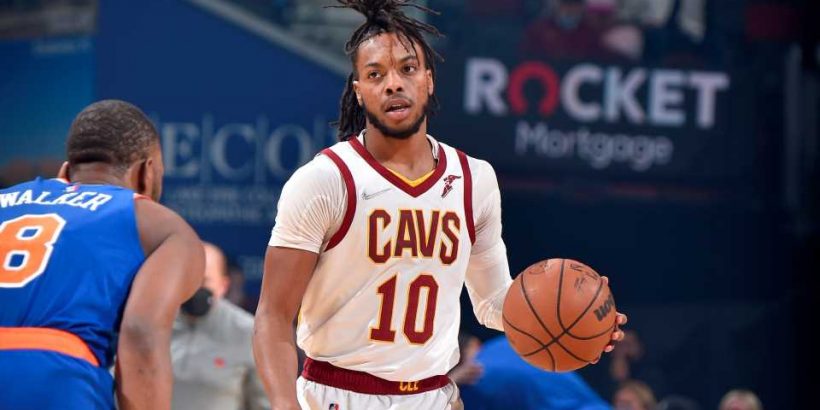 The Cleveland Cavaliers are well ahead of schedule this season, already eclipsing their win total from 2020-21 as they establish themselves as a genuine playoff contender in the Eastern Conference.

Behind the impressive Rookie of the Year-worthy play of Evan Mobley, the Sixth Man of the Year-contending play of Kevin Love and the near All-Star level performances of Jarrett Allen, the Cavs have pieces all over the floor making a difference.

But there has been no bigger difference-maker than Darius Garland.

The third-year guard showed flashes of his star potential in his first two seasons, but through the first 48 games of the season, Garland’s consistency has stood out as he has routinely been their best player on the floor each night.

Fresh off a streak of five-straight 20-plus-point games, Garland was at it again in their 95-93 win over the New York Knicks at home, recording 13 points and 12 assists, becoming the first player since LeBron James (2017-18) to record five-straight games of 10-plus assists. This stretch ties Garland for the longest streak by any Cavaliers player over the last 10 years.

That’s been the theme of Garland’s season, routinely putting his name alongside the greatest player in Cavaliers history.

Earlier this month he became the fourth-youngest player in Cavaliers franchise history to record a triple-double and the only Cavaliers player since LeBron to do so in three quarters over the past 25 years.

In the process, he’s got the attention of some of the league’s biggest stars.

“Steph reached out. Steph reached out a lot,” Garland said via The Akron Beacon Journal. “Donovan Mitchell, his compliments are really cool. And then just like some of my close friends in the league, like some of my big brothers like Tristan [Thompson], Bron, Kevin Durant, Damian Lillard. Like they are just telling me to keep going and keep pushing. I mean, that’s pretty cool to hear that from some of the best basketball players to touch a ball.”

One player who has seen the development up close has been Cavaliers veteran Kevin Love, lauding Garland’s performances, especially against the league’s best guards.

“I saw him go up against Kyrie last night, and we were talking about it this morning,” Love said on a recent appearance on JJ Redick’s Old Man and the Three podcast.

“He has so much respect for how great of a basketball player Kyrie is, but I’m almost like, ‘Darius, you went toe to toe with one of the absolute best point guards of the last 10, 20 years, and you were amazing. You helped us win that game in a major way.’

“He continues to prove it. He continues to make that next step. I think he also is understanding, even when he doesn’t have a great scoring game, or he doesn’t shoot great from the field, like in Utah, he was still able to impact the game and win us the game in a number of ways.”

The season-ending injuries to Ricky Rubio (ACL) and Collin Sexton (knee) could have easily derailed the Cavs’ season, but Garland’s steady growth has papered over their injury issues.

After the third returns of the 2022 NBA All-Star voting, Garland ranks ninth among the Eastern Conference guards with 343,551 votes and while it might be a stretch for him to make the leap to All-Star status this season, it’s a matter of when, not if.