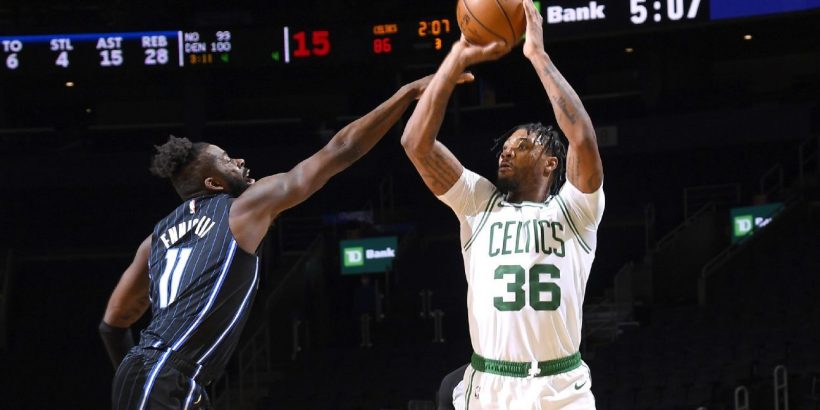 Celtics guard Marcus Smart said that in the wake of the team’s loss to the Sacramento Kings on Friday night — Boston’s fourth in five games to open the second half of the regular season — the Celtics held a team meeting to try to right themselves and turn around what has been a disappointing campaign before it’s too late.

“We just kind of sat in the locker room and we just really self-reflected on each other,” Smart said after the Celtics responded with a 112-96 victory over the Orlando Magic at Boston’s TD Garden on Sunday. “We asked each other, like I said, ‘How do we want to end the season? How do we want to be remembered for this season?’ Everybody agreed, this was a bad feeling and an ugly feeling that we are feeling and we don’t want to feel like this.

“We don’t want to look back on this season and be like, ‘Damn, we could have did this.’ We still have time. It’s not a lot, the margin for it is closing, but we still have time to fix it, and that’s what we are trying to do.”

After lackluster losses to the Cleveland Cavaliers and Kings in its prior two games, Boston looked much more like the team it is supposed to be Sunday, controlling the game throughout the second half. Boston shot 23-for-54 from 3-point range — including Jaylen Brown’s going 10-for-18 from behind the arc en route to a game-high 34 points — while holding the Magic to 38% shooting overall.

Boston’s topsy-turvy season has left it in a tie with the New York Knicks for sixth in the compressed Eastern Conference standings. The Celtics are just a game behind the fourth-place Atlanta Hawks and are 3.5 games ahead of the Toronto Raptors in 11th — showing how much things can change for better or worse in the span of a few games, depending on how a team is playing.

With the Celtics now in the midst of having their starting five healthy and playing together for an extended period for the first time this season, they are hoping now is the time they can start to figure things out after hovering around .500 all season — far below the standard they’ve set for themselves in recent years, as they’ve made the Eastern Conference finals three of the past four years.

“We were focusing on what we want this season to be for us, what we want to leave behind this season,” Smart said. “We have enough time to turn it around, and that’s all on us. We sat down and we understand we haven’t been playing to the criteria that we expected and others expect us to. We are a young team, and we are learning. The big thing and the biggest thing about growth is understanding and accepting the faults that you are wrong for — yourself, individually, and as a team.

“The talks that we had, we did that. We just tried to sit down and tried to figure it out and listen to one another to help — not ourselves, but the team, individually and everybody. Try to put everybody in the right position to succeed, and we came out and it showed tonight, and that’s what we have to continue to keep going.”

Boston will get a chance to see if there’s a carryover Monday in Memphis, where the Celtics will begin a four-game road trip that includes games in Milwaukee against the Bucks on Wednesday and Friday.

It would help their cause if the Celtics can continue to shoot the way they did Sunday — including Brown, in particular, who finished one short of Smart’s franchise-record 11 3-pointers in a single game.

More than the shots he hit, however, Brown said it was just important for the Celtics to get the bad taste of the past few games out of their mouths before they head out on the road again and try to carry their momentum forward.

“It’s a huge stepping stone for us,” Brown said. “We’ve been in a little bit of a funk. To come in here — early game, a little bit different from our routine — to come in and get a nice, comfortable win is just good for our spirit. We know that we’ve underperformed, and we’ve kind of had that extra pressure on us just from everybody, from all the outside forces. So I just told our guys to just focus on us, man. Forget about what the media is saying, forget about what the fans are saying and just come out and play some good basketball, and let’s see where the chips fall, and hopefully we can do that more — a lot more — for the rest of the season.”