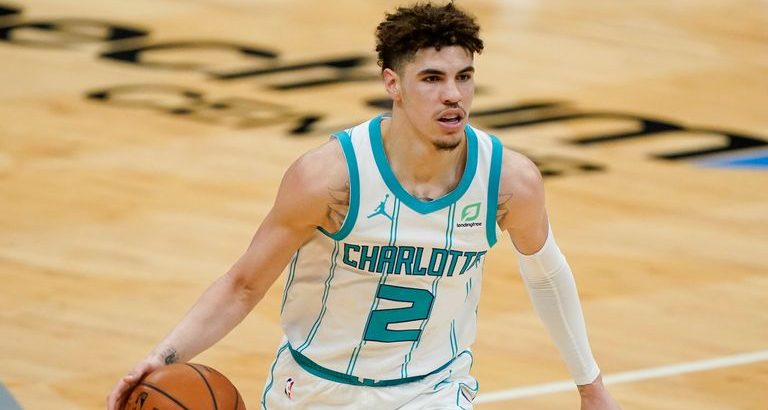 LaMelo Ball gets to experience his first basketball homecoming on Thursday night when the Charlotte Hornets visit the Los Angeles Lakers.

The NBA rookie played his high school ball at Chino Hills High School, 39 miles east of Staples Center, where he teamed with older brothers Lonzo and LiAngelo for an undefeated state-championship season in 2016.

Lonzo Ball now plays for the New Orleans Pelicans, and another of their Chino Hills teammates, Onyeka Okongwu, currently plays for the Atlanta Hawks.

LaMelo was a freshman at the time. He played just one more year of high school ball at the school before he bounced around from a professional league in Lithuania, the SPIRE Institute and Academy in Ohio and then the top Australian pro league before becoming eligible for the NBA draft.

Because he was drafted by the Hornets, an Eastern Conference team, Ball will play just twice in Los Angeles this season. Charlotte is scheduled to visit the Los Angeles Clippers at Staples Center on Saturday.

Current California state laws will not allow fans to attend either Los Angeles game, but Ball knows he will be surrounded by family and friends nonetheless.

“Obviously you want your family to come see you,” he said this week. “Growing up, they always watched me, so it would kind of be like going in the past.

“I mean, I know my people. They’ll be cool watching it on TV, too. We really like chilling at the house, more with the comfortable stuff other than being out. Like, I honestly would rather watch a game at home, chilling, than going to one.”

Ball will be facing Lakers star LeBron James for the first time. The 19-year-old insisted he hadn’t given that much thought.

“I mean, nah. I grew up a little different,” he responded when asked if he were excited about the matchup. “It will still be cool, but I go to every game with the same approach: going in to try to get a win.”

The Hornets failed to accomplish that goal on Wednesday in the opener of a five-game trip, falling 129-104 to the Denver Nuggets.

The one positive of getting blown out was that no Charlotte player was pressed into more than 27 minutes of action, meaning the club should be relatively fresh for the second night of a back-to-back. Ball played 22 minutes, scoring 14 points.

The loss snapped the Hornets’ four-game winning streak. The Lakers, meanwhile, have won three in a row.

James had triple-doubles in each of Los Angeles’ past two contests – Monday at Golden State and Tuesday at home against Minnesota – to give him 99 for his career. His next one would make him the fifth player in NBA history to reach the 100 milestone.

Frankly, James admitted after the Tuesday win, he’s been more impressed the past two games with teammate Montrezl Harrell, who contributed a total of 52 points, nine rebounds, seven assists and four steals to the victories.

“When we got him, I knew it could be something that we could exploit,” James said of the former Clippers big man.

“So I think as of late, we know where we are on the floor, we know the sets that we’re in. He’s doing a hell of a job of being able to set screens for me, get me downhill, and then I’m just trying to put it on time, on target before he gets to his game.”