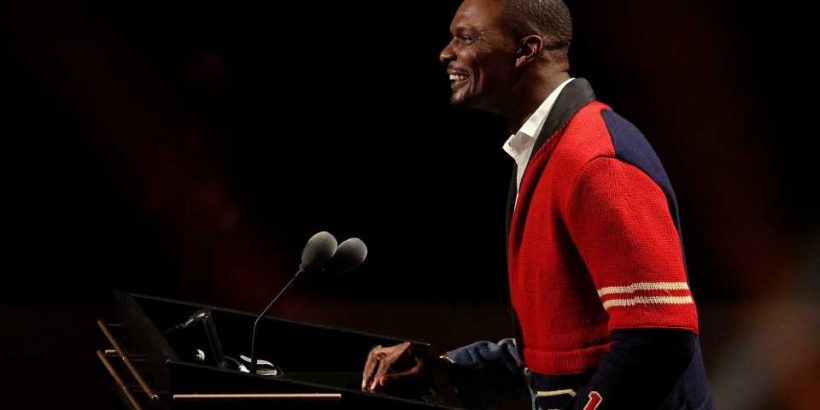 The lows of his basketball life, Chris Bosh said, laid the foundation for many of the highs he would later enjoy in it.

As he stood at the pinnacle of his sport Saturday night — as a new member of the Basketball Hall of Fame — he told a story about something that cemented that mindset into place: a pre-Olympic encounter with Kobe Bryant in 2008.

Bosh was a teammate of Bryant’s on Team USA and the squad was together before heading to Beijing. This was just after Bryant’s Lakers had lost to the Celtics in the NBA Finals. Bosh said he wanted to show leadership as a young player, so he set out one morning to be first at breakfast. He was stunned to see Bryant already there, and already finished with his workout.

“That taught me something I’ve never forgotten: Legends aren’t defined by their successes; they’re defined by how they bounce back from their failures,” Bosh said in a moving induction speech. “And that’s what I hope to communicate to anyone watching this, especially to kids.

“When you look back on my career, when you visit Springfield and see my plaque, it’s going to seem inevitable that I ended up here, and that’s how I felt about my heroes growing up. I thought they were automatically destined for greatness.

“But as I’ve been reflecting on my career, I’ve realized the accomplishments were anything but guaranteed. The highs I’ve experienced? They were only possible by how I bounced back from the lows. From those moments when I wondered if it was worth it, or if I was wasting my time, or if I was good enough. The moments when I feared I would never grow into the person or the player I knew I could become.”

One of Bosh’s deepest lows was the Heat’s loss to the Mavericks in the 2011 Finals. That was the first year of the Miami super team with him, LeBron James and Dwyane Wade. Bosh’s tearful reaction to the defeat went viral. He said the emotion fit with how he had always reacted to losing, starting with when he played pickup ball as a kid.

Bosh eventually got back to work, and the Heat got back to the Finals the next three years, winning back-to-back titles in 2012 and 2013.

But less than a year after Miami’s 2014 Finals appearance, Bosh’s career began to crumble. He was forced to miss time during the 2014-15 season with blood clots in his lung that caused a pulmonary embolism, which could have killed him. He returned for the 2015-16 season, only to be sidelined again with clots in his leg. He desperately wanted to keep playing, but the medical professionals impressed upon him how risky that would be.

Bosh said a lot more tears flowed after he realized he would have to retire in his early 30s. But those tears, like the ones he had shed before, helped cultivate greater determination.

After Saturday, he’s officially one of the greats in his sport.