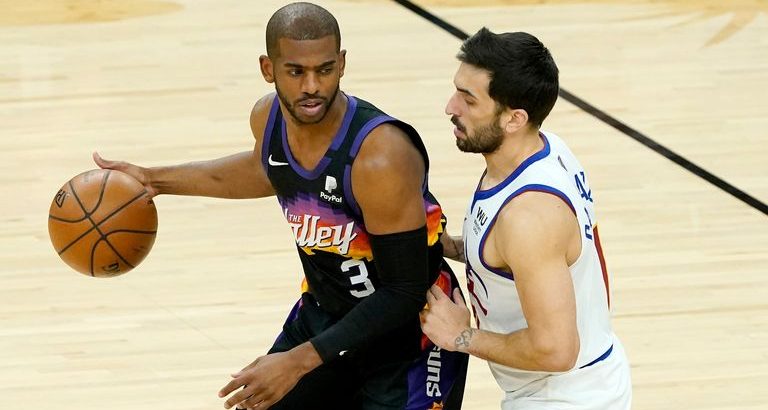 Chris Paul had 17 points, 15 assists and zero turnovers as the Phoenix Suns ran riot to beat the Denver Nuggets 123-98 in Game 2 of the Western Conference semi-finals.

Paul’s faultless orchestration of the Suns’ rampant offense was once again a sight to behold as Phoenix shot 47 percent from three-point range and led by up to 31 points in front of typically fiery home support.

He became the first player in NBA playoff history to have three such games of 15 assists on zero turnovers, supplementing it with timely buckets from midrange and two back-to-back triples a few minutes into the fourth quarter to put the Suns up 27 and effectively seal the game.

Thanks to Paul’s timeless playmaking the other four Phoenix starters scored in double figures, while Torrey Craig and Dario Saric had excellent games coming off Monty Williams’ bench.

On the other side of the floor, the entire Nuggets starting unit struggled other than the newly-crowned MVP Nikola Jokic, who had 24 points, 13 rebounds and six assists – a stat line that was not even matched by the rest of Denver’s starters combined.

Aaron Gordon in particular did not have a productive evening, scoring just six points with one rebound as Jae Crowder got into his head early in the encounter with his typically rugged brand of defense, put his feet up on the coffee table and remained there throughout.

Nuggets head coach Michael Malone called it an “embarrassing performance all round, from top to bottom”, but it is difficult to be too harsh on this roster given they are missing Jamal Murray and P.J. Dozier – two guards who would surely have made a positive impact on this game, especially Murray given his pick-and-roll chemistry with Jokic and delirious microwave scoring.

Chris Paul is a gift. pic.twitter.com/iqQrWsYnLM

Will Barton did return to the Nuggets’ rotation for the first time since late April and looked bright in his 15 minutes of action but ultimately Denver’s starting backcourt of Facundo Campazzo and Austin Rivers – who was waived after being traded to the Oklahoma City Thunder in March – looked vastly overmatched against Paul and Devin Booker (18 points and 10 rebounds).

Monte Morris too, who was so impactful off the bench in the first round against Portland, failed to generate any scoring as a lead ball-handler alongside Jokic and shot 1-7 from the floor.

The Nuggets’ second-best player without Murray, Michael Porter Jr, was listed as questionable with a back problem ahead of the game and had by far his worst shooting performance of the playoffs so far, going for 11 points on 23 percent shooting.

Given that the Suns’ 22-year-old center Bahamian Deandre Ayton is limiting Jokic’s offensive production as much as is physically possible – there is only so much you can do against the MVP of the league – and Murray remains out for the season, it is hard to see how Denver get back into the series given their lack of offensive firepower elsewhere.

Chris Paul in 2014, who was the first player to do it since…

For Phoenix, it is job done at home and with Chris Paul looking every bit his Point God self, their task now is to fly into the Mile High City and burn every bit as bright. This is now their fifth consecutive playoff win and they have taken the first two games in this series by an average of 21 points. In fact, their 25-point victory handed Denver their biggest loss of the season at the very worst possible time.

If you did not have them pencilled in as reaching the NBA Finals after dethroning the Los Angeles Lakers, now is very much the time.