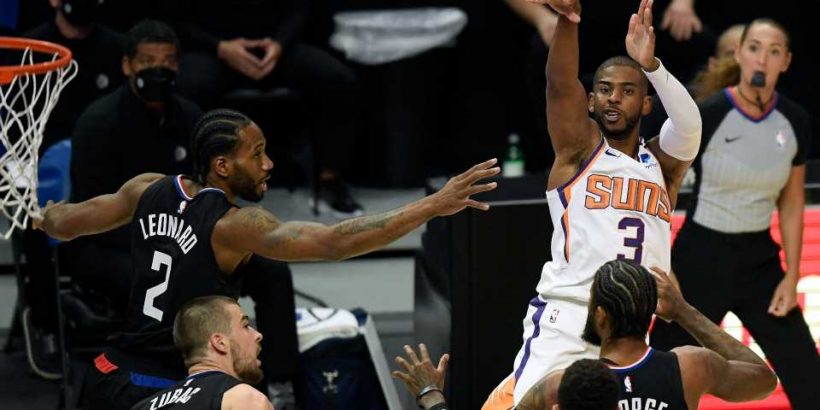 The absences of Kawhi Leonard and Chris Paul are looming large as the Clippers and Suns look to keep their championship hopes alive.

In Game 1 of the Western Conference finals, Devin Booker made sure Phoenix didn’t take a step back without Paul, leading the Suns to a 120-114 victory with a 40-point, 13-rebound, 11-assist triple-double. Paul George (34 points, five assists, four rebounds) and Reggie Jackson (24 points, six rebounds, four assists) stepped up with Leonard out, but they couldn’t quite get the Clippers to the finish line.

Both All-Stars haven’t been ruled out of the NBA playoffs, so when will they return to the court?

Here are the latest updates on Leonard and Paul ahead of Tuesday’s Game 2.

Will Kawhi Leonard play vs. Suns?

Leonard is listed as out on the official Game 2 injury report. The Clippers forward hasn’t played since suffering a right knee sprain in Game 4 of the Western Conference semifinals.

During an appearance on NBA TV, Yahoo Sports’ Chris Haynes reported that Leonard has been rehabbing in Los Angeles and the team is treating his injury as a “day-to-day situation.”

Will Chris Paul play vs. Clippers?

Paul is also listed as out for Game 2. The Suns guard is currently quarantining in Los Angeles after testing positive for COVID-19 last week, but he is symptom-free, per Haynes.

“They are very encouraged with how he’s going through this protocol,” Haynes said. “With the being said, they’re not rushing anything. . . . The Suns still don’t have an update as far as when he will be available — the protocol is kind of tricky — but they’re hopeful that it will be relatively soon.”