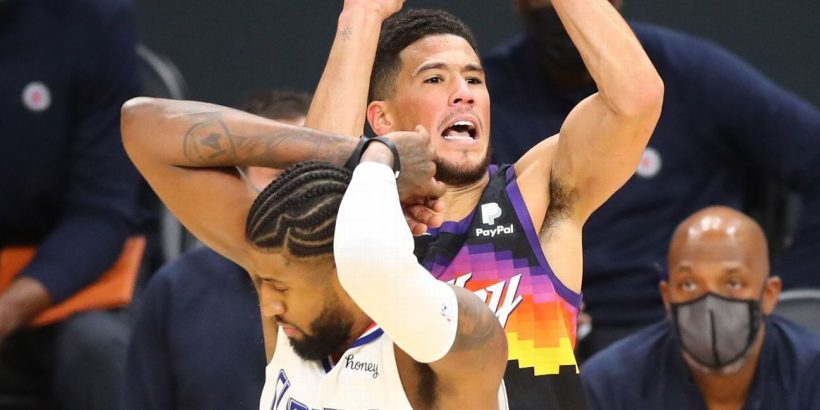 LA Clippers guard Paul George said he was having a conversation with a referee when things escalated with Phoenix Suns’ guards Chris Paul and Devin Booker, leading to technical fouls called on George and Booker in the fourth quarter on Sunday.

After scoring 39 points and hitting seven 3-pointers to lead the Clippers to a 112-107 win in Phoenix, George suggested that he heard “a lot of chirping” that had to do with his struggles in the bubble during last postseason in Orlando, Florida.

“You got to ask them,” George said when asked what happened with Paul and Booker. “I was talking to the ref, CP jumped in and it escalated from there. Like I said, I’ve never had any words talking, there was never any altercation, there was always peace when I am on the floor but for whatever reason, there’s a lot of chirping and people just living in the past.

“Last year was last year. I’m in a new situation, I am in a different mindset. Any of that hate stuff, you got to ask them. I don’t know where that’s coming from.”

After he and Booker were hit with double technical fouls with 7:20 remaining in the game, George scored five points and then found an open Nic Batum for a 3-pointer that sealed the Clippers’ win with 11.9 seconds left. Shortly before the technical fouls on George and Booker, the Suns had cut a 60-29 deficit down to 96-94 with 9:10 left in the game.

When asked what George said to Booker that led to the technical fouls, the Suns guard said he didn’t remember.

“It’s nothing honestly,” Booker said after the Suns had a four-game winning streak snapped. “It’s nothing.”

George is off to a strong start to the season and is just the third different player in NBA history to have at least 30 3-pointers through his team’s first seven games of the season. This comes after a candid George revealed during a shooting slump in the bubble that he experienced some depression while being on the NBA campus in Orlando and away from loved ones. The Clippers would later blow a 3-1 series lead and double-digit leads in three consecutive losses to the Denver Nuggets in the second round.

George and Kawhi Leonard struggled in Game 7 against Denver with George shooting 4-for-16 and scoring 10 points while Leonard finished 6-for-22 with 14 points.

The Clippers guard said he found motivation in the offseason from criticism of his play in the bubble.

“Absolutely,” George said. “And it’s the reason I came into this year focused. I heard all the noise and I use all that noise for motivation.”

With Leonard struggling through a 4-for-21 shooting night against the Suns, George hit six of his first nine 3-point attempts and had 32 points entering the fourth quarter. Booker scored 12 of his 25 points in the fourth to help Phoenix nearly erase the 31-point deficit.

But George said he was surprised to hear talk directed at him.

“I don’t talk, I play my game,” George said. “For whatever reason, it’s dudes talking. Like, never heard people talking [before], and it’s never been directed towards me but for some reason it’s a lot of mouth. And it’s fine. I got to play up to that.

“I’ll go through the fire. It’s fine. As long as we come out on top, we win and I am helping my team win. That’s all that matters. Save the rest, they can do what they want. I’m locked in and it’s more so about me being at peace and at ease.”