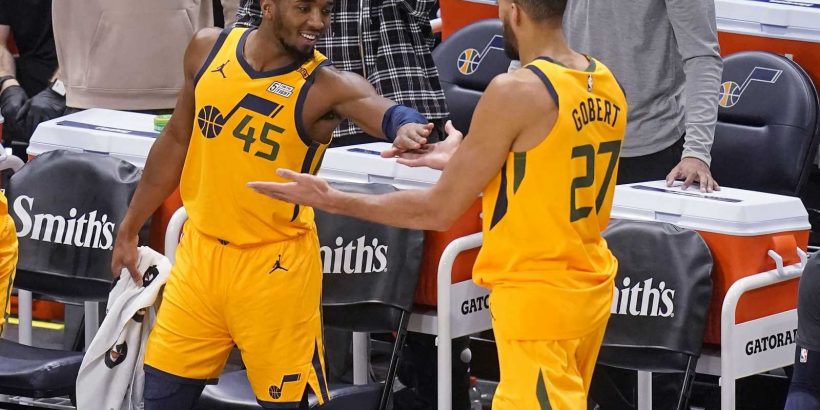 The Utah Jazz had the potential to self-destruct and ruin what they were trying to accomplish.

The Jazz became the face of COVID-19 in pro sports when All-Star center Rudy Gobert tested positive on March 11, 2020 – two days after touching reporters’ recorders in an attempt at a coronavirus joke – and All-Star teammate Donovan Mitchell was diagnosed with COVID-19 the next day.

The league made the dramatic decision to suspend the season the night Gobert tested positive.

Reports of strife between the two stars emerged immediately. Mitchell and some teammates were frustrated with Gobert. Both players saw the reports.

“Rudy and I are unsalvageable,” Mitchell said, parroting the headlines.

Were the Jazz on the verge of imploding? Would the Jazz have to trade one All-Star to placate another All-Star?

The Jazz did not implode. They didn’t have to trade either of their stars.

LIKE SPORTS? SO DO WE: Sign up for our daily sports newsletter and never miss a moment.

Rudy Gobert (left) and Donovan Mitchell have led the Jazz to the top of the Western Conference standings after Gobert's positive COVID-19 test last year threatened to cause friction between the two All-Stars. (Photo: Chris Nicoll, Chris Nicoll-USA TODAY Sports)

Gobert and Mitchell had an honest conversation, the Jazz persevered and grew closer and emerged a better team. As this season resumes after the All-Star break, the Jazz are atop the Western Conference standings with the best record in the league.

“Quite frankly, a lot of it was blown out of proportion as most of these things are,” Mitchell said Sunday. “If we lived our lives on social media, we wouldn’t be even-keeled.”

Jazz coach Quin Snyder, who has been the voice of reason inside and outside of the locker room, downplayed the Gobert-Mitchell tiff.

“I’m less dramatic about Rudy and Donovan after last year,” he said. “Those things happen with best friends, with teams, with teammates. The unique thing last year was the overlay of the whole COVID experience. Rudy tests positive and then Donovan was the only other player at that point who tested positive. It really called attention to that situation.”

The NBA had suspended the season. Teams didn't practice. Teammates didn’t get a chance to talk in person.

How did they get here from there?

“When you go through tough times, it makes you grow,” Gobert said. “It’s exactly that for me. Those few weeks, those few months were very tough. I was able to get through it with the help of a lot of people, obviously people around me, my family, people who are there for me.”

“Going to Orlando and having the opportunity to play basketball but also having that opportunity to connect and to share particularly around the social and racial justice issues, that certainly is a pivot point for our group and one that continues," Snyder said.

“This past year, I’ve felt like a lot of the growth and adversity and the challenges that we went through, there’s a growth process that takes place on the court and off the court as well. Guys have grown closer and the team has grown closer as a result of everything we’ve been through.”

“It really fueled us to come into this season with a chip on our shoulder,” Mitchell said. “That’s what you’re seeing – a bunch of guys who just feel like we’re going to go out there and do it.”

Just before training camp opened, Mitchell signed a five-year extension worth $163 million that could rise to $195.6 million if he is an All-NBA selection. Days before the season opened, Gobert signed a five-year, $205 million extension.

The Jazz have both players on long-term deals. It was a resounding signal the Mitchell-Gobert thing was behind the Jazz and that the two are fine.

“We’ve got a terrific group of players,” Snyder said. “I’m lucky to have a chance to coach them because they are connected, they’re unselfish – that unselfishness, more than anything, has been a big part of us having some success in the first half of the year.”

Six players average in double figures in scoring, and Utah is first in 3-pointers made per game (17.1), third in 3-point percentage (.398) and second in rebounds per game.

“The threat, you don’t  know where it’s coming from each game, and that’s what makes us special,” Mitchell said. “As a group, the chemistry is unbelievable.”

Mitchell and Gobert have thrived individually and together.

“We were cohesive in many respects last year but not like we are now,” Snyder said. “That growth process is normal. In our case, it’s much easier to track because the story and the narrative was so compelling given COVID and no one is playing.

“A lot of attention was given to us really as a microcosm and those guys in particular. You watch everybody play right now and you watch those two guys play, that’s a long time ago literally and figuratively.”