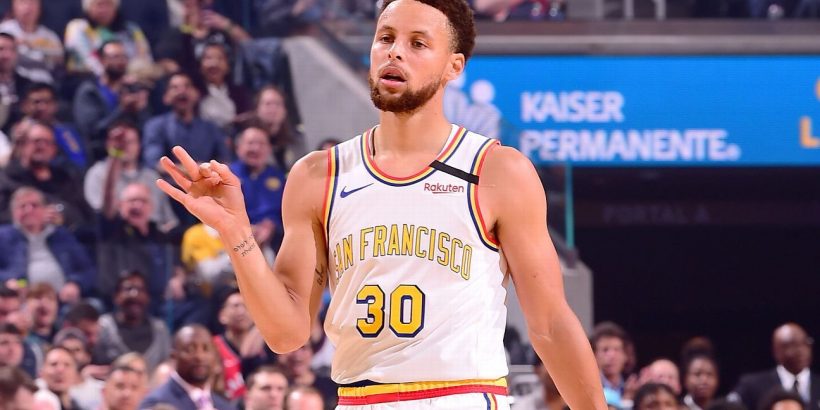 SAN FRANCISCO — Stephen Curry is the all-time points leader in Golden State Warriors history, passing Wilt Chamberlain’s previous record of 17,783. Curry’s record-setting basket came on a driving layup with 1:40 left in the first quarter of Monday’s game against the Denver Nuggets. Needing just 19 to surpass Chamberlain, Curry finished with 21 points in the first quarter, receiving congratulations from teammates and coaches after heading to the bench at the end of the quarter.

“It’s just an incredible feat,” Warriors coach Steve Kerr said before Monday’s game. “Passing Wilt in anything statistically is sort of remarkable because his name is just all over the NBA record books. So the fact that Steph is about to break that record is just incredible and obviously a testament to what he’s done here in his 12 years, what an impact he’s made.”

Curry, 33, was taken with the No. 7 pick in the 2009 Draft and has been setting records throughout his 12-year tenure with the Warriors ever since. In the days leading up to the record-setting basket, even he couldn’t believe he was getting close to passing Chamberlain in Warriors history, calling it a “pretty significant milestone.”

“That’s surreal to be honest,” Curry said recently. “I don’t know how many years he played here, but got a lot of buckets. Obviously, a legend who remains across the whole league, but obviously wearing a Warriors uniform and having been here my whole career, it’s pretty crazy. So I’ve got a couple more points to score, hopefully some more wins in the process, but it’s a wild thought in general.”

On top of his on-court performance, what has always stuck with members of the organization — and throughout the league — is the way Curry’s shooting ability has changed the game. Curry, who entered Monday night with a career 43.3 shooting percentage from beyond the arc, has created a wave of younger players on every level who are shooting from longer distances than ever before because he made it cool to take shots from all over the floor.

“I don’t know if breaking that record even tells the story,” Kerr said. “Because what Steph brings goes so far beyond points. It’s the impact on his teammates, on the community, on the organization, style of play. Just how unique he is as an individual; he’s changed the game. He’s inspired all the young NBA point guards who have come up to become much better shooters. He’s changed the game — so as awesome as this accomplishment is, passing Wilt, it’s just one of many for Steph.”

In an era defined by player movement, Curry’s latest accomplishment is even more impressive to many within the game given that he’s stayed with the Warriors while repeatedly saying he only wants to wear one jersey during his career.

“Maybe Steph should be glad that Wilt was part of the player movement, otherwise he never would have passed Wilt,” Kerr said. “But I think it is really refreshing when you see a guy like Dirk Nowitzki or Kobe Bryant or now Steph, maybe Klay hopefully, Draymond, all those guys, when you see players with one franchise for their entire careers, it’s really special.”

“The amount of time he puts in, I knew this was coming,” Durant said. “And we know that him breaking records is something that to me feels like it’s guaranteed with the way he plays. It was just a matter of time and to see him do it all on one team is special.”

Kerr noted a recent trip to play the Mavericks underscored the impact Curry has had on the Warriors organization.

“When you play in Dallas now, when you look on the floor there’s a silhouette of Dirk shooting his signature fadeaway on each end of the floor,” Kerr said. “And I love that, I thought it was a really great idea from the Mavericks. It’s such a great way to sort of honor Dirk and remember his legacy. I imagine there will be something like that here. Maybe a picture of Steph like holding his mouthpiece or something.”

While it’s a safe bet that the Warriors will offer a similar tribute down the line, Curry agreed that it’s a good thing Chamberlain didn’t play in this era.

“I’m glad the three point line wasn’t around for him,” Curry said. “Because then I wouldn’t have had no time to break it. He would have figured that out probably, too. I’m glad I play in this era, put it that way.”