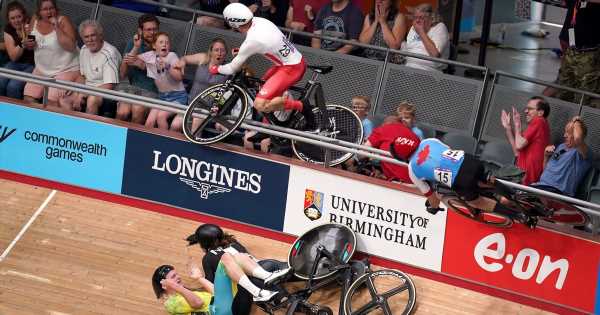 The cyclist who crashed into the Commonwealth Games crowd and injured a fan has shown off his own giant scar.

English rider Matt Wells was involved in an extremely scary incident on Sunday (July 31) when he flew over the barriers at the London velodrome during the final lap of qualifying for the men's 15km scratch race.

Two spectators, including one who was covered in blood and taken away in a wheelchair, were treated at the scene, while Walls was rushed to hospital needing stitches on his forehead. He was discharged later that night having avoided any serious injuries.

He has since returned home and provided an update on Instagram, posing alongside the Isle of Man's Matt Bostock, who too was taken to hospital after being stretchered away from the crash.

The 24-year-old can be seen giving the thumbs up in the social media upload with the caption: "Its been a crazy couple of days but I’m finally back home recovering. Thanks again to everyone for all the kind messages and support.

"Also a big thank you to all the medical staff at the @leevalleyvp and @theroyallondon_ed for taking such good care of us and stitching me up. Wishing everyone involved a quick recovery, especially the spectators who got injured during the chaos."

Olympic omnium champion Walls was trying to avoid a collision in front of him when he swerved towards the top of the velodrome. Canadian Derek Gee was also hospitalised after several riders fell.

The incident has once again increased calls for more safety measures to be implemented at velodromes worldwide, with cycling legend Sir Chris Hoy suggestion Perspex screens to prevent any repeats.