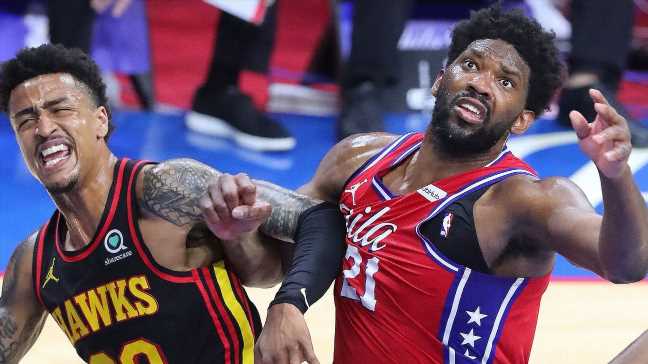 Joel Embiid came back from a knee injury to play, but the Philadelphia 76ers couldn’t come back from a 26-point deficit against the visiting Atlanta Hawks, losing Game 1 of their Eastern Conference semifinals series 128-124 on Sunday.

Playing for the first time in six days since suffering a meniscus tear in his right knee in Game 4 of Philadelphia’s first-round series with the Washington Wizards, Embiid led all scorers with 39 points on 12-for-21 shooting (14-for-15 on free throws) and added nine rebounds, four assists and three blocks.

“Playing on a torn meniscus is not easy,” the Sixers star said. “All I got to do is keep managing it. Do my best. Get as much treatment as I can. Try to manage it to make sure that it doesn’t swell up too much. Obviously, the pain is going to be there. That’s normal.

“But it’s all about managing it, doing whatever it takes to win. Because my goal is to win the championship. I’m going to put my body on the line to make sure that happens. I’m going to give everything I got.”

The Hawks, led by Trae Young’s 35 points, had everything going for them early. They led by 15 after the first quarter and took their largest lead of the game off a Bogdan Bogdanovic 3-pointer with 9:22 remaining in the second quarter to nearly double the Sixers’ score at 53-27.

Young had 25 points and seven assists by halftime for the second time in his career. The first time he did it, on Jan. 30, 2020, also was against Philadelphia, according to research by ESPN Stats & Information.

But Philadelphia, the No. 1 seed in the East, showed up late in Game 1.

The Sixers used an 11-0 run over 2 minutes, 12 seconds of game time in the fourth quarter to draw within three points with 1:01 remaining. And they got as close as two off a Ben Simmons dunk with 10.5 seconds left, before the Hawks held on thanks to a couple of Bogdanovic free throws.

“Up until the last five minutes, things were going pretty well,” Atlanta guard Kevin Huerter said. “Thank God we were up 20. Just too many turnovers.”

Embiid scored six of the 11 points in that late flurry, but Sixers coach Doc Rivers was uneasy keeping his injured center on the court for it as the game sped up and Embiid’s playing time ticked past 38 minutes.

“I didn’t like him in, even though we had to have him in,” Rivers said. “But when we were trapping and running around in that last three minutes and obviously we made a run, I did not like him on the floor at that point because I didn’t want him doing those things, if you want to be honest. That’s why we told him to just stand back. Because those are the ones that you get injured on.”

Embiid, back in the second round with the Sixers for the third time in the past four seasons, disagreed.

“I can adjust to any style of play. We just played Washington that played fast. This team, they were physical. They play fast. I can adjust to it. It’s the playoffs,” he said. “You can’t worry about how many minutes someone is supposed to play or is going to play. You got to go with your best guys.”

Even though the Philly center seemed to tweak his knee late in the game and, while running down John Collins to foul him, fell to the floor, Embiid said he will continue to go full throttle.

With Embiid scoring 11 of his 39 points in the fourth quarter, the Sixers outscored Atlanta 41-29 in the final frame, harassing the Hawks into six of their 17 turnovers.

“The run, it just shows that when we’re out there playing as hard as we can, how good we are,” said Tobias Harris, who had 20 points and 10 rebounds for Philadelphia. “And we need that from the start of Game 2 — and all the games going forward. Just that type of mentality, not to let our guard down throughout this whole series.”

Simmons also learned a lesson from how the Sixers closed things out.

“I think we waited too long,” he said. “They hit us first; we didn’t hit back. At one point, we were down 26, and we still were in the game [at the end]. That tells you a lot about this team and what we’re capable of doing. We never want to do that again, obviously. We got to start the right way.”

Harris said Embiid “played his tail off,” and the center reminded reporters that he has had big games while battling his body before.

“If you look at the history, every time I’ve had an injury, it always feels like I never miss a beat,” Embiid said. “Just because, I go out there, I’m not thinking about what happened or may be going on. It may be bothering me, but I’m just not thinking about it. I just want to focus on giving my all.”

But he wasn’t all that impressed by his performance, despite setting a new career playoff high in points and scoring the most for a Sixer in a postseason game since Allen Iverson put up 45 against Charlotte in the first round back in 2003, according to ESPN Stats & Info data.

“I could have played better,” Embiid said. “We lost the game.”