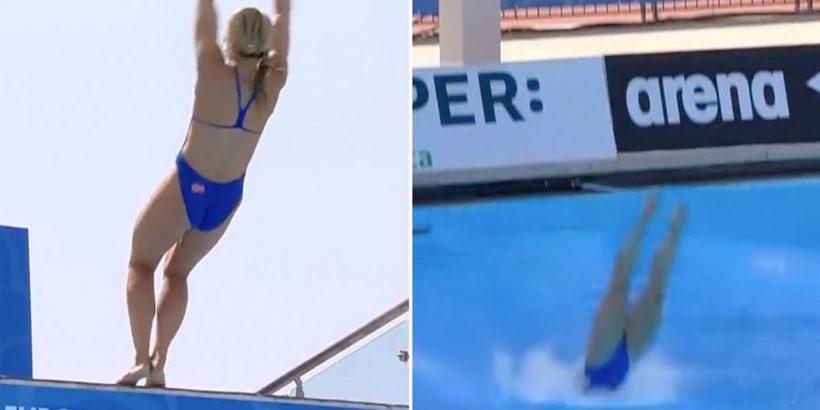 A BBC commentator was left feeling the pain of one of the female competitors in the European Aquatics Championships.

During the preliminary rounds of the women's platform event in Rome, Elma Lund provided a memorable moment – just not in the way she perhaps intended. After three of five qualification dives, the Norwegian was in the final of 12 qualification places for the evening's final, having racked up 140.45 points.

However, her fourth dive of the competition didn't exactly go to plan. Lund managed to make a total mess of her position, hitting the water hard in the belly-flop position.

On commentary, Leon Taylor summed up the feeling of most onlookers by saying "ouch" as the noise of the impact reverberated around the arena: "The take-off is…not doing her any favours," he continued.

"She is leaning back way too far and then completely gets disorientated. Her coach can't even hold the camera straight because she hits the water in such a position."

Indeed, her coach was seen squirming just moments after the dive, and both his, and Lund's, worst fears were realised when the judges delivered a damning verdict. They awarded her marks of between 0.5 and 1.5, totalling 8.70, and wrecking any hopes she had of a final appearance.

Should belly-flopping just become a diving category in its own right? Let us know in the comments section.

That's despite her responding with an improved fifth and final dive, which at least ensured she avoided last place as she ended up 15th out of the 16 entrants. Furthermore, the nightmare ruined Lund's 21st birthday.

The event is running parallel to the European Athletics Championships in Munich, which has produced it's own interesting 'landing' this week. In the men's triple jump final, Sweden's Jesper Hellstrom ended up flat on his back in the sand after making a total mess of his approach.

Instead of sticking the landing with his feet, Hellstrom turned his body mid-air to proper himself towards the sand before going limp and crashing down like a dead salmon. After landing, the two-time national champion raised his hands in the air as the cameras flipped onto his coach in the stands.