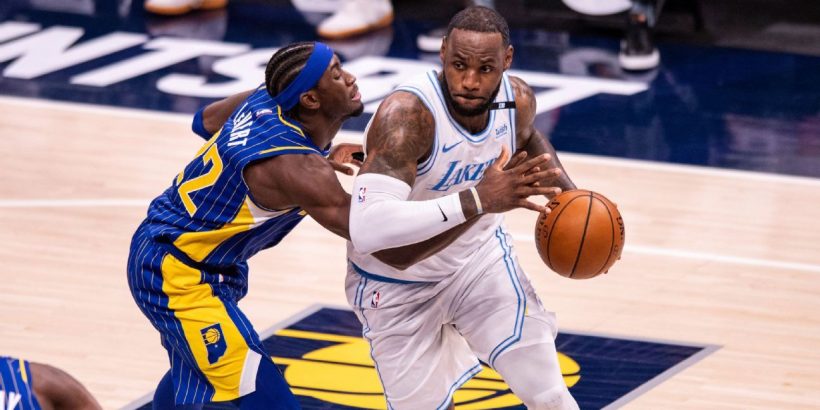 As the regular season comes to a close, each team has something to play for: seeding or draft picks. With the addition of play-in games to the 2021 NBA playoffs, the scramble for seeding is wilder — and more important — than ever, with almost every game down the stretch having significant postseason implications.

Play-in games to be held Tuesday through Friday.

Here’s a breakdown of Sunday’s matchups and what the results will mean:

Who will make the top six in the West?

The Lakers can play their way out of the play-in tournament with a little help from the Denver Nuggets on Sunday. If L.A. beats the New Orleans Pelicans and the Nuggets top the Portland Trail Blazers, L.A. will end up as the No. 6 seed in the Western Conference playoffs. If the Lakers lose, they’ll host a play-in game on Wednesday against either Golden State or Memphis.

New Orleans will be without its young superstar Zion Williamson, who has missed the past five games with a fractured left index finger. The Pelicans have already been eliminated from postseason contention. — Dave McMenamin

After the LA Clippers sat virtually every member of their rotation and lost at the Houston Rockets on Friday night, the Clippers can stay in the fourth seed in the West with a loss at Oklahoma City on Sunday. The fourth seed would all but guarantee the Clippers and Lakers would not meet until the conference finals — if both teams advance that far.

On the other hand, the Thunder are going to be desperate to lose once more in order to ensure they finish no worse than tied for third with the Magic in the lottery standings. Oklahoma City has gotten quite good at losing over the past several weeks, going 1-23 since April 1. — Bontemps

For the Portland Trail Blazers, it’s not complicated: Beat the Denver Nuggets, get a top-six seed. The Blazers can even move up to fifth if the Dallas Mavericks lose at Minnesota, by virtue of a tiebreaker in hand. Who Portland would play in the first round is complex, and it involves Denver.

If the Blazers win on Sunday, the Nuggets would fall to fourth, but only if the Thunder also beat the Clippers. If the Clippers win, the Clips are the 3-seed and the Nuggets are fourth, no matter what. And with the Lakers potentially looming as the 6-seed, moving to the 3-seed might not seem that appealing. — Royce Young

The fight for the 8-seed in the West

The winner becomes the eighth seed in the Western Conference — a major difference because the Golden State Warriors or Memphis Grizzlies would end up with two chances at a playoff berth.

Sunday’s winner can try to claim the seventh seed in the play-in tournament. The loser of Sunday’s game must win two straight games in order to qualify for the postseason. — Nick Friedell

Settling the play-in seeds in the East

While the Indiana Pacers can no longer finish in eighth place in the Eastern Conference after losing to the Los Angeles Lakers on Saturday afternoon, a win against the tanking Toronto Raptors on Sunday will ensure that Indiana hosts the 9-10 game in the NBA’s inaugural play-in tournament on Tuesday night. However, a loss will mean that Indiana will either be traveling to Charlotte or Washington as the 10th seed in the East. — Tim Bontemps

After Washington beat Cleveland on Friday night and the Charlotte Hornets lost in overtime to the New York Knicks on Saturday, the game between the Wizards and Hornets on Sunday afternoon has become the unofficial start of the Eastern Conference play-in tournament. The winner will become the eighth seed, and the loser will likely become locked into the 10th seed, assuming a Pacers victory over the Raptors. — Bontemps

Who will make the top six in the East?

The Knicks only have to win at Madison Square Garden on Sunday in order to clinch the fourth seed in the East. With a tiebreaker over Atlanta, a Knicks win means they’ll be ensured of finishing in no worse than a tie with the Hawks, meaning the first round of the playoffs will begin next weekend. Boston is locked into the seventh seed, and waiting to see who its opponent will be at TD Garden on Tuesday night. — Bontemps

A victory for the Hawks could mean home-court advantage in the first round — but only if they get a little help. If Atlanta finishes in a tie with New York, the Knicks would own the tiebreaker and send the Hawks to the fifth spot. With New York playing earlier on Sunday, Atlanta will have a good idea of whether the four seed is attainable. The Rockets don’t have anything to pay for other than pride, as they already have the worst record in the league secured. — Lopez

The Heat’s loss to the Bucks on Saturday night means they are now are on track for the sixth seed and a rematch with the same Milwaukee team they beat in last season’s Eastern Conference semifinals. The Heat currently sit one game behind the Knicks and Hawks, who sit in a tie for fourth place. The Heat own the tiebreaker over the Knicks but not over the Hawks. If the Knicks beat the Celtics and the Hawks take care of business against the Rockets on Sunday, the result of the Heat’s finale against the Pistons won’t matter as far as seedings are concerned. — Friedell

Who will win the No. 1 seed in the West?

In a rematch of Saturday’s contest, the Suns will once again look to topple San Antonio as they continue their quest for the No. 1 seed. The Suns also will have to hope Utah slips up against the Sacramento Kings in a later game in order to overtake the Jazz for the top spot. Phoenix cannot fall any lower than second.

Meanwhile, the Spurs are set in the 10th spot, so they could once again opt to rest players, as they did with DeMar DeRozan, Rudy Gay, Dejounte Murray and Jakob Poeltl on Saturday. — Andrew Lopez

It’s simple for the Utah Jazz: A win over the Sacramento Kings claims the West’s top seed, regardless of the Suns’ result against the Spurs. It also would give the Jazz the outright best record in the league for the first time in franchise history. (Utah tied for the NBA’s best record in 1997-98 and 1998-99.) The Jazz will finish at least tied for the NBA’s best record no matter what, but the Suns own the tiebreaker over them, so a loss to the Kings could cause Utah to slip to the second seed.

The Kings, currently tied with the Pelicans for the ninth-worst record, will land from eighth to 10th in the lottery odds. — Tim MacMahon

Other intriguing matchups to watch

The easiest path to the No. 2 seed in the Eastern Conference is for Brooklyn to win both of its games this weekend. Brooklyn took care of the first half of that equation with its win over the Bulls on Saturday afternoon.

Now, the Nets will watch and see what happens between the Miami Heat and Milwaukee Bucks on Saturday night. The outcome of that game not only impacts the Nets’ playoff seeding — if the Bucks lose on Saturday, it secures the No. 2 seed for Brooklyn — but it has an effect on who Steve Nash might elect to hold out of Sunday’s contest with the Cavaliers. Nash said he prefers not to play James Harden, Blake Griffin and Kevin Durant — all whom have a history of injury — on Sunday. If the Nets’ can lock up their seeding on Sunday night, the decision to rest those players becomes easier. — Malika Andrews

The Dallas Mavericks know they’ll face either the Denver Nuggets or LA Clippers in the first round, but the Mavs won’t have any clarity before tipoff on how the result of their regular-season finale will determine their playoff matchup. A win over the Timberwolves will clinch the fifth seed for the Mavs, but the Clippers will be the fourth seed if they manage to lose to the Thunder or if the Nuggets beat the Trail Blazers. Dallas also could lose on Sunday and see the Clippers in the 3-6 matchup. A Mavs victory combined with a Clippers win and a Nuggets loss would result in a Denver versus Dallas 4-5 matchup.

The Minnesota Timberwolves, whose pick goes to the Golden State Warriors if it doesn’t land in the top three, are currently tied with the Cleveland Cavaliers for the fifth-worst record, one loss less than the Orlando Magic and Oklahoma City Thunder. — MacMahon

Giannis flexes and growls after and-1 flush

Giannis Antetokounmpo puts on a mean face and flexes his muscles after he gets the inside pass and rises up through contact to force down a dunk for the Bucks.

Milwaukee should have a good idea of whether it can still claim the second seed by game time. Brooklyn’s match against Cleveland tips off two hours earlier and if the Nets lose, a win over the Bulls will give the Bucks the two spot in the East. Meanwhile, the Bulls hold the eighth spot in the lottery by themselves. Beating Milwaukee would potentially push Chicago into a three-way tie with New Orleans and Sacramento. — Bontemps

After Philadelphia beat Orlando on Friday night, the Sixers enter Sunday’s game with nothing to play for, having already secured the top seed in the Eastern Conference playoffs.

The Magic, on the other hand, have everything to lose for. Losing Sunday’s contest will ensure Orlando finishes no worse than a tie for third with Oklahoma City in next month’s NBA draft lottery. The Magic are one of several teams at the bottom of the standings that might be trying their best to lose one final time before heading home for the summer. — Bontemps