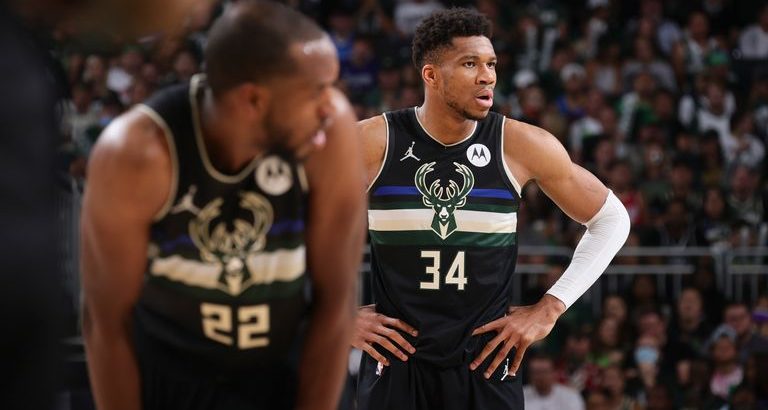 After Kevin Durant’s 49-point epic poem in Game 5, this always felt like something of a free hit for the Brooklyn Nets. They had two opportunities to send the Milwaukee Bucks home. Now they have one.

Right out of the gate the Nets were sloppy in possession and committed four turnovers in the same number of minutes. Three of them were the fault of James Harden, who bar a brief outburst in the second quarter, looked every bit as though he was playing with one functional hamstring.

Jrue Holiday got going with an early pullup midrange jumper and then a three as Steve Nash called his first timeout midway through the first quarter. His response was telling: the ball was quickly moved to the hands of Durant on the block in back-to-back possessions, Khris Middleton under his jersey. You don’t need me to tell you how those two possessions ended.

Durant’s effortless jumper and nasty spin move around Middleton for a dunk were followed by a Blake Griffin three-pointer to cap a 7-0 run. Concerningly, however, Harden stripped Giannis Antetokounmpo with those jewel thief hands of his but rather than roaring downcourt for a layup, he simply stopped dead in his tracks. This was not the player we are used to seeing.

Milwaukee ended the first 26-19 to the good, with Jeff Green being served on a plate with fries every time he tried to stay in front of Giannis, at his freakish best throughout. Even if he did treat his free-throws with all the urgency of a glacier.

With just under eight minutes left in the second, Durant took his first few minutes of rest after five straight quarters of playoff basketball.

As he did so, Harden briefly stirred back into his superstar self for 11 quick points. He could only go one speed, and very much resembled an old banger chugging up the hill in first, but it didn’t stop ‘The Beard’ shifting into the lane for floaters nor stepping-back for those lip-licking three-pointers, the exact diet of shots he thrived on for all those years in Houston.

Even with only one hamstring, James Harden can cook 🔥 pic.twitter.com/3naxmIaJC9

A Middleton three-point barrage ended the second, taking him to 17 points in that quarter alone and the Bucks to a 59-48 half-time lead. Meanwhile Giannis had 19 points on nine shots (89 per cent) and his first half all post-season without attempting a three.

The omens were good. Getting the two-time MVP as far away from the arc and as close to the basket as possible is as simple a formula for success as there is in this world.

17 points in the second quarter for Khris Middleton to help the Bucks to a commanding 59-48 lead at the half. pic.twitter.com/1FszF6u9Uh

The second half continued in much the same pattern, with Milwaukee denying Durant the ball at every possible opportunity and pressuring Harden the moment he crossed half-court. The rest of Brooklyn’s starters – Griffin, Harris and Green – could do nothing but half-heartedly shift around their offensive sets in response.

Whereas Mike Budenholzer’s team could happily switch every pick, Brooklyn couldn’t afford to with Giannis steamrolling his way to the basket and Middleton hitting clutch buckets from midrange and the perimeter.

It was evident this game would only be close if Durant went full supernova and he seemed happy to oblige, going 6-8 on field goals for 12 points in the third, including 10 straight for his team. Maybe that doesn’t sound like much given his avalanche in Game 5, but each bucket was as tough as they come.

The Bucks were doing everything to stop him and only him and even so, he still put up 32 points with every arm and hand in the arena in his face.

Durant has now scored 25 points in 10 of the Brooklyn Nets last 11 playoff games. In the other game he had 24.

The problem for Nash was that at the other end there was Middleton, calmly responding to every twitch of life from the Nets with an onslaught of his own.

They got as close as five points before he shut the door on the third quarter with three straight field goals, including one at the buzzer to bring him up to 27 points before the final period.

Middleton follows the play to beat the buzzer 🚨

Khris is up to 27 on the night, while the Bucks take an 11-point lead into the final quarter pic.twitter.com/AuN0VHuINU

Things unravelled for the New Yorkers in the fourth. Durant opened it with an airball three and a turnover as Milwaukee went on a 10-0 run. You sensed the game was rapidly slipping away for the Nets but Holiday’s continual ill-advised step-back threes seemed to grant them a lifeline, with the Bucks’ third star a ghastly 1-10 from deep for the game.

At which point, as though seeing his own reflection in the mirror, Joe Harris shook off his ongoing cold spell to drive to the basket and nail a long-awaited three-pointer of his own to pull Brooklyn within five. As well as Milwaukee had played, here they were down the stretch, barely holding off a team miles away from their best basketball.

For a second, you felt the unthinkable was about to happen for them in a win or go home game.

Joe Harris makes a HUGE bucket to pull the Nets within five here in the fourth pic.twitter.com/62Dtk6KRy1

Fortunately for Cream City, that was as tense as things got. Harris immediately fouled Middleton as he shot from range to gift the man who couldn’t miss three attempts from the line. Sensing this would be the final nail in the coffin, and knowing a thing or two about the dark arts of foul-drawing and referee deception, Harden begged his head coach to challenge.

Nash called a timeout to mull it over, during which Harris admitted guilt. The swingman is in more ways than one. Now 5-24 from deep over the last four games, the best sniper during the regular season has completely lost his sights at the worst possible time.

Middleton hit each shot and the Bucks were up eight with eight to go. Less than a minute later their lead was 15. The Harris giveth and the Harris taketh away.

In the end, the Bucks capped an emphatic 14-0 run to seal things with a typically thunderous Giannis offensive board and dunk over the hapless Green, who was coming off the back of a playoff career-high 27 points in Game 5 but anonymous this time out.

It was a fitting finale, bookended by the two driving forces for Milwaukee this series.

The Greek Freak caps a 14-0 run for the Bucks with the emphatic slam over Jeff Green.

We have a Game 7 on our hands folks pic.twitter.com/FWO5ttPrZ9

Giannis ended with 30 points and a monstrous 17 rebounds. Middleton had 38, 10 and five on 69 per cent shooting from the floor. The Bucks cruised to a 104-89 victory with their reserves in the rest of the way.

During those perfunctory final six minutes, Durant and Harden finally got some rest. They had followed gargantuan efforts in Game 5 with another 40 minutes each. They’ll need to take every deep breath they can between now and Saturday night as Game 7 awaits.