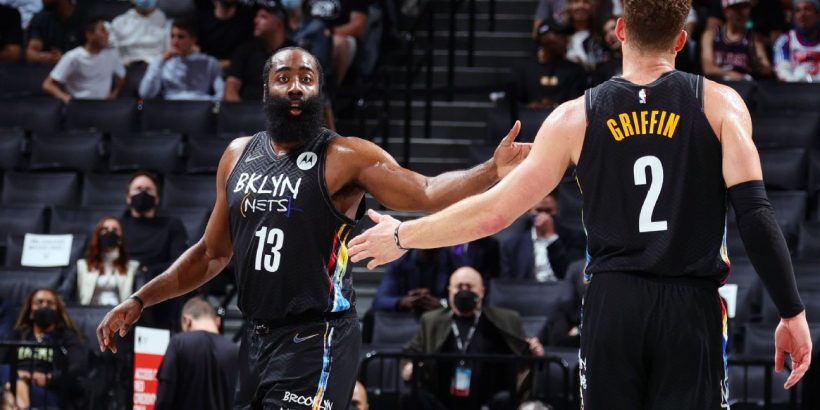 BROOKLYN, N.Y. — On Monday evening, the Brooklyn Nets announced that Kyrie Irving and James Harden would both be sitting out Game 5 of the Eastern Conference semifinals against the Milwaukee Bucks.

When Harden woke up Tuesday morning, however, he had other ideas.

“[I] woke up and was like, ‘You know what? Let’s go,'” Harden said after finishing with five points in 46 minutes in Brooklyn’s 114-108 victory over Milwaukee on Tuesday night as the Nets took a 3-2 lead in this best-of-seven series. “I tried to go out there and do the best I can. Hopefully I gave my teammates some encouragement, some life.”

While Harden’s teammates no doubt got a boost from him being on the court, it was hard to argue he was anywhere near his normal self in his first game action since aggravating the right hamstring injury that also kept him out for several weeks at the end of the regular season.

The decision to allow Harden to play was made after he tested his hamstring on the court before tipoff. It was the first time Harden was available to play in a game since June 5, when he aggravated his hamstring in the first minute of Game 1 of this series. Since then, he has been dealing with what the team has called hamstring tightness.

And it was clear in watching him Tuesday that he’s still dealing with it. He finished the game 1-for-10 from the field, including 0-for-8 from 3-point range, to go along with six rebounds, eight assists and four turnovers, and from the opening moments of the game, it was apparent he wasn’t going to be able to contribute how the former NBA MVP normally would.

Harden hardly got out of first gear at any point in the game, largely serving as a decoy on offense and simply trying to stay out of the way defensively. Still, his being out there — after being upgraded from out Monday night to doubtful Tuesday morning to questionable Tuesday afternoon — was a big emotional lift for his team going into the biggest game of the season.

“I mean, it just shows how much he loves to play,” Durant said. “I was a little nervous for him because he hasn’t played in a while and that’s a physical team and his hamstring is one of those injuries that takes a while to heal. But he came out there and toughed it out, had eight assists and six rebounds.

“He missed some good looks all night. I know his legs are going to get back under him as time [goes] the next few days or so. Hopefully, next game he’ll start to knock some of those shots he usually makes down.

“We’ve got our work cut out for us in Game 6, man. It’s going to be our toughest game of the year.”

The most stunning part of the evening was that Harden was able to play 46 minutes — far more than anyone would have realistically guessed he’d be able to before the game began.

Afterward, however, he said he felt OK, and that he’d be ready to go for Game 6 on Thursday night in Milwaukee.

“I didn’t expect to play, so 46 is a lot,” Harden said with a laugh. “But I’m good for it. Just get some rest, and get my proper treatment. Credit to our trainers and things like that, they’ve been doing an unbelievable job of preparing me, so get some rest and give it another shot in Game 6, and try to come up with the same results.”

The Nets likely will have to do so without Irving, who missed the game with a sprained right ankle that he suffered in Game 4. Brooklyn is preparing to be without Irving for the rest of the series, sources said. The team hasn’t officially ruled Irving out beyond Game 5.

Brooklyn has battled injuries all season. The Big Three of Harden, Irving and Kevin Durant played just eight games together in the regular season and six games together in the playoffs — including the game in which Harden was injured after just 43 seconds. Harden missed 18 games in the regular season with a hamstring strain, and before that he missed two with hamstring tightness.

Now, though, the Nets are one win away from the Eastern Conference finals — thanks in part to Harden’s sudden turnaround, and his determination to get back on the court.

“I feel great,” Harden said. “We won. So that’s all that matters. At this point it’s, by any means necessary. As long as there’s a ‘W’ in that column and we keep racking up wins, that all that matters.

“It’s a great team win for us. We haven’t really been together the entire year we’ve dealt with so many injuries or what not that we haven’t had an opportunity or been through adversity. So we know that there was gonna be times in the postseason where we hit adversity where things feel like they’re up against us and they can’t be done. In reality they can be done. We just gotta find ways to get them done.

“It feels like just when things are going well something hits us. My approach to the guys is keep fighting. It’s going to be great on the other side and we did that tonight. So, proud of the guys.”