Rivers’ father, Grady, worked as a police officer in Maywood, Illinois, west of Chicago. On Election Day, however, Grady worked the polling stations to see how the workers would treat Black people eager to cast their ballot.

“He wanted to make sure guys could vote,” Rivers told USA TODAY Sports. “He was a cop, but he was probably working on the opposite side. At a lot of these places, there were road blocks going on.”

Attempts at voter suppression continue today. Polling sites in Texas, California and Georgia had long lines during the primary elections, most often in areas affecting minority communities. President Donald Trump has opposed additional funding for the U.S. Postal service, saying that increased access to mail-in ballots will lead to voter fraud. Voting rights groups have viewed that as an attempt to rig the election by suppressing minority votes.

“I've been sending mail out all my life and it's never been a problem, and now all of a sudden it's a problem,” Rivers said. “Voter suppression is happening right now.”

SportsPulse: Jarrett Bell shares what he thinks makes Adam Silver the ideal leader for a sports league during tumultuous times and why Roger Goodell hasn't done the same when it comes to social justice.

Some NBA teams have made efforts to reduce the severity of that problem.

The Sacramento Kings have overseen “Rally the Vote,” a non-partisan voting registration initiative that partners with “When We All Vote,” “RISE” and 20 professional sports teams from the NBA, WNBA, NFL, MLB, MLS, and NWSL. The Kings, Chicago Bulls, Denver Nuggets, Indiana Pacers, Milwaukee Bucks, Minnesota Timberwolves, Portland Trail Blazers and Washington Wizards are participating. Those teams as well as the Atlanta Hawks and Memphis Grizzlies plan to give their employees paid time off to vote for national and local elections.

Monumental Sports & Entertainment, which oversees the Wizards, their G-League and gaming teams, the WNBA’s Mystics and the NHL’s Capitals, will make employees eligible for 16 hours of paid volunteer time to work at polling sites. The Hawks, Bucks, Grizzlies and Detroit Pistons have encouraged their employees to volunteer at polling sites on Election Day.

The Houston Rockets, Kings, Clippers and Pistons plan to open either their practice facility or arena as a polling center for the Nov. 3 election, while the Rockets will also have their arena open for early voting between Oct. 13-30. Lastly, the Hawks, Clippers, Rockets and Golden State Warriors joined the “I am a voter.” platform and the Good Trouble campaign to encourage fans to text for voting information.

“We’ve lit a huge fire. Just about every sports team and athlete is getting behind it in some way,” Kings owner and chairman Vivek Ranadivé said. “In our society, sports teams and athletes have a huge voice. It’s great that they’re using it to spread democracy. There couldn’t be a more noble mission.”

Hawks coach Lloyd Pierce was instrumental in getting the franchise to use State Farm Arena as an early voting venue to process absentee ballots for Georgia’s General Primary Runoff Election between July 20 and Aug. 11. Lloyd volunteered as a parking lot attendant and plans to volunteer again when the arena becomes an early voting site for about three weeks before the Nov. 3 election. With those initiatives, the Hawks hope to oversee a 40 percent increase in absentee ballots and early voting to reduce potentially long lines.

“If we can be a part of allowing people to vote early or via mail, then we feel like we have done a great service,” Pierce said. “Hopefully we won’t have to worry about all the issues that are occurring here in Georgia on Election Day.” 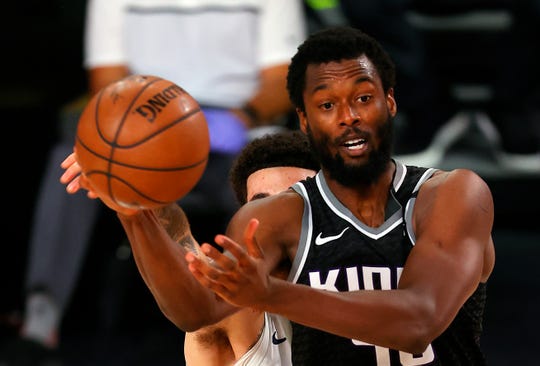 Because of those concerns, the NBA players union spoke recently on a conference call with former First Lady Michele Obama about other possible voting initiatives.

Boston Celtics forward Jayson Tatum and former NBA star Shaquille O’Neal joined one of them, called the “MyStartingFiveChallenge,” which entails nominating five people to register to vote by using #MyStartingFive on social media platforms. Memphis’ Jaren Jackson Jr., Milwaukee’s Wesley Mathews, Washington’s Ish Smith and Ian Mahinmi as well as Sacramento’s Harrison Barnes have helped their respective teams with their voting initiatives behind the scenes, including filming public service announcements about the importance of voting.

“It’s as if voting was made difficult by design,” Barnes said. “We are working not just for education, but for people that want to vote when their process has not been made feasible.”

“If all we do is protest and don’t follow through to voting, we’re not going to see the change we want to see.” – @hbarnes#BlackLivesMatterpic.twitter.com/WR1DvmvNro

What are the next steps?

To improve that process, all the participating NBA teams have established online portals with tips on how to register to vote, fill out ballots for absentee or mail-in voting and to sign up to work at polling sites on Election Day. Those teams have navigated some challenges, however, with establishing their venues as polling sites.

The Bucks hoped to use Fiserv Forum on Election Day, but said the Milwaukee Election Commission indicated the deadline already had passed. Alex Lasry, the Bucks’ senior vice president, stressed there “was nothing nefarious” about the ruling.

“We want to do whatever we can to be helpful. But we’re not going to break any laws in doing so,” Lasry said. “If the city wants to use Fiserv Forum as a voting or polling place, we got other elections coming up. If they think that is the best use of resources and everything, we would be happy to offer Fiserv Forum as a polling site. If not, we plan on using a lot of our efforts in engaging, educating and registering voters.”

Monumental Sports & Entertainment said it is in discussions with the DC Board of Elections and the Executive Office of Mayor Muriel Bowser about using Capital One Arena as a polling location on Nov. 3. The Grizzlies said they have been in contact with the city’s Election Commission about using FedExForum as an early voting site for Election Day, and “it is under consideration based on need as well as location.”

Although the Hawks cannot use their venue as a polling site on Election Day, their foundation has paid for costs for other efforts. The Hawks have retrofitted the arena during early voting, offered free parking to those who cannot use public transportation, and have trained their employees to serve as polling workers.

“Georgia law doesn’t allow us to be open on election day. We can only be open early voting,” said Steve Koonin, the Hawks’ chief executive officer. “On election day, you must vote in your precinct if you haven’t voted. So the idea is 40 percent of the people will vote mail-in absentee. We gave our practice court to the county [government] to tabulate those votes.”

The Kings, however, partnered with the Sacramento County Office of Voter Registration and Elections to have Golden 1 Center become a polling site beginning Oct. 24 through Election Day.

“The arena is the 21st century cathedral where the gatherings are,” Ranadivé said. “Why not turn that into something where you can easily vote?”

After all, “When We All Vote” and the teams are mindful of the challenges to vote this year amid the coronavirus pandemic and voter suppression tactics. “When We All Vote” reported that 100 million eligible voters did not vote in the 2016 election and at least 88 million Americans have not registered this year. Yet, participants sounded optimistic those numbers will improve with these initiatives.

“Sports teams and athletes playing a role in that is critical with making sure folks understand this isn’t about telling someone who to vote for. It’s just about making voting accessible to more people,” said Kyle Lierman, CEO of “When We All Vote.”

“Despite the challenges that we’re facing because people are trying to suppress the vote and the pandemic, I think you’re going to have record turnout this year. That is going to be in part because of efforts like ours and athletes and teams stepping up in a way that we never have before.”

JOFRA ARCHER: It will be fun giving Mo some bouncers in the IPL!