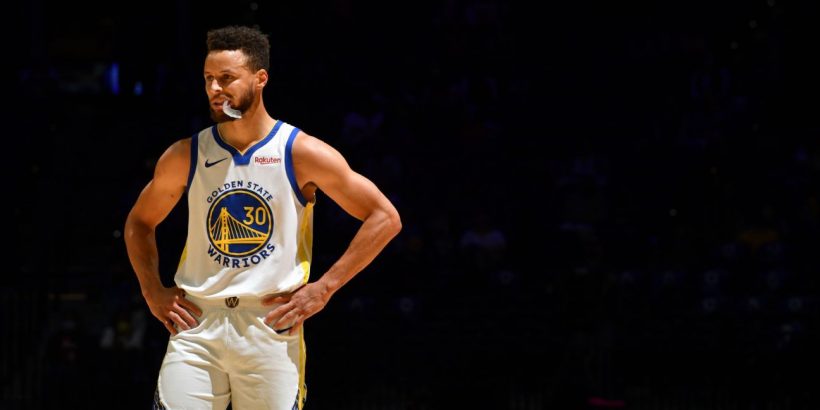 LIKE SO MANY parents at the beginning of the Covid-19 pandemic last year, Stephen Curry found himself trying, and mostly flopping, at a strange new role.

“I was basically the substitute second grade teacher for my oldest daughter,” Curry said of Riley.

He loved spending all that time with her after missing so many nights leading the Golden State Warriors to five straight NBA Finals appearances and three titles. But Riley was not as enthused.

“I was getting compared to her friends that she couldn’t see on a daily basis,” Curry said. “So I wasn’t, I guess, a good hang.”

And yet Curry looks back fondly on that time fondly.

“I had nine months to recharge and rejuvenate the battery,” he said. “So now I’m in pretty good shape to just go play and enjoy what I get to do.”

That energy has been both infectious and important in a season and a sport in which the regular season has seemingly mattered less and less. With stars sitting out long stretches with injuries or just for load management, and constant COVID-19 testing and quarantines, Curry has mattered more and more.

The Warriors (32-32) might only be fighting a spot in the play-in tournament, but they’ve played in half of the NBA’s 10 most-watched games this season. Ratings from games on their local television partner, NBC Sports Bay Area, are up 103 percent from last season [when Curry missed all but five games due to injury].

His most recent scoring streak has been downright binge worthy. From March 29 to April 19, Curry scored over 30 points in 11-straight games. The Warriors-Celtics game on April 17 drew a whopping 2.5 million viewers on ABC — a figure that would look good even before the pandemic began, affecting viewing habits.

“I’m very aware,” Curry said when asked about the responsibilities of being one of the faces of the NBA. “I try to be.”

It’s why he does interviews on an off day in Minnesota, despite the Warriors’ blowout loss to the Dallas Mavericks the night before.

And why coach Steve Kerr spots him signing autographs outside the team’s hotel when they arrived in Houston late Thursday night.

“It’s the middle of the night, we’ve just landed from Minneapolis, and there’s 10 or 15 people outside the hotel,” Kerr recalled. “He goes over there and signs a few. It’s just who he is.”

A few night’s earlier, Kerr had talked about the lack of connection everyone in the NBA has felt this season, playing amidst the pandemic in largely empty arenas with little to no contact with friends or family while traversing the country on a condensed schedule.

But when you go to work everyday with someone like Curry, it’s a little easier.

“It’s just his approach, it’s the joy that he brings to every day, regardless of circumstances,” Kerr said. “He loves practice, he loves the work, he loves the routine. And that just sets a tone.

“If the leaders are setting a tone like that, and there’s a lot of joy in the room, then even when you’re going through a season like this, like we are, it’s still fun.”

They were both drained by the five straight Finals runs. Mentally, physically, even spiritually, that takes a toll.

“You could feel the exhaustion,” he said. “But you’re still playing in the Finals and that’s all I want to get back to now.”

That feels like a long ways away at the moment. All-Star guard Klay Thompson hasn’t played in two years due to injury. The Warriors supporting cast is young and unproven.

“It’s not easy. It’s not like there’s this magic trade that we’re going to make that’s going to make us contenders again,” Kerr said. “The team we’ve had over the last seven years, that was one of the great rosters in the history of the NBA.”

So how is Curry playing with the same kind of joy on a team fighting just to make the playoffs?

“I’m blessed to say I still love to play basketball,” he said.

Even on a team that’s 1-7 in games he doesn’t play this season — essentially a 10-72 team over a normal year — and struggling to maintain its grip on the 10th seed?