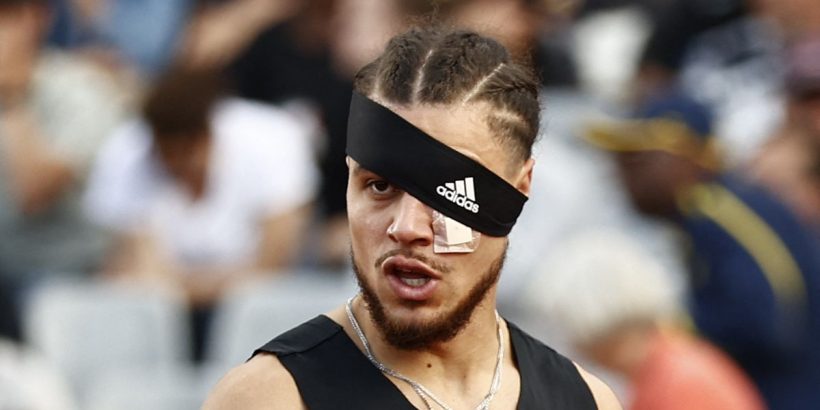 It's one thing to win a running race with a niggling injury, but quite another to be crowned national champion just minutes after being physically beaten up.

At the French Championships on Saturday, Wilfried Happio was warming up for the final of the 400m hurdles when all hell broke loose. The 23-year-old was attacked by a man who seemingly evaded security before landing a number of violent blows.

Happio's coach Olivier Vallaeys managed to halt the assault, before the perpetrator was arrested by the police. It left the athlete a bloodied mess, and there appeared little chance of him recovering in the 20 minutes available take his place on the starting blocks in Caen.

To the shock of the crowd though, and fellow competitors, the Parisian declared himself fit to compete, albeit wearing an eye patch and bandaged up. And even more remarkably, despite RMC Sport reporting he was coughing up blood just moments beforehand, Happio went on to be crowned French champion after clocking a time of 48.57 seconds.

The new personal best time ensured the French star sealed his place at next month's World Championships in Eugene, Oregon. He previously competed at the same event in Doha, where he crashed out early in the heats.

After the race he went to hospital for further medical assessment, but only after telling reporters: "I don't want to dwell on it. We'll leave that to the competent people. To talk about the race, we worked a lot, we redid the music and that's it. The feelings were good. I'm glad I did this time. Physically it's fine."

Is it time for harsher rules on pitch and track invaders in sport? Let us know in the comments section.

Coach Vallaeys added: "There was a big incident during the warm-up. Someone jumped on him and hit him. A guy who came from nowhere asked him if it was really him Wilfried Happio and threw himself on him.

"I belted it. It was 20 minutes before the race, we were ready to go to the call room. We're in shock. The guy was arrested. Wilfried is fine."But I'm speechless, it's a mess. "Sheer aggression. It's outrageous. These are savage methods."

Le Parisien have reported that the French Athletics Federation, and the city of Caen, will file a complaint against the attacker. For Happio, the World Championships will get underway on July 15.