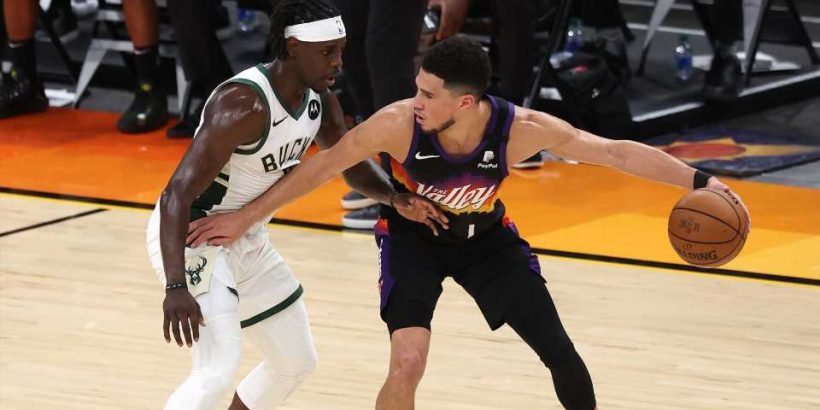 With less than 30 seconds remaining in Saturday night’s pivotal Game 5 of the 2021 NBA Finals, the Suns trailed the Bucks by one point, and Devin Booker had the ball in his hands. Everyone inside the Footprint Center — from his primary defender, P.J. Tucker, to the fans in the front row (hello, Adele) — knew Booker wanted to score.

And that was the problem. As Booker drove into the lane, he had to contend with not only Tucker, but also a former Defensive Player of the Year in Giannis Antetokounmpo. When Booker got stuck and attempted to spin away from Tucker and Antetokounmpo, he met Jrue Holiday, who abruptly ended the possession when he ripped the ball out of Booker’s hands.

Holiday started the fast break and found Antetokounmpo gliding down the floor for an alley-oop. That sequence ended Phoenix’s comeback hopes and gave Milwaukee a 3-2 series lead.

“Honestly it was great team defense,” Holiday said. “I feel like we knew Booker wanted to take that last shot and played great defense on him and made him turn his back and he turned right into me. I guess I was just in the right place at the right time.”

It wasn’t just the right place to be — it was the only place to be. The Suns’ offense has become far too reliant on Booker to make things happen, and the Bucks know it. This is not the same team that was giving off 2013-14 Spurs vibes in Game 2.

Phoenix has lost its last two games despite Booker scoring 82 total points while shooting 55.7 percent from the field. The numbers have been impressive, but far too many possessions have featured Booker working in isolation and taking contested midrange jumpers.

Through five Finals games, Booker has thrown 127 total passes, per NBA.com tracking data. He made 92 passes in the first three games (30.7 per game) of the series but just 35 passes in the past two games (17.5 per game). As a result, his potential assists have gone way down.

“Yeah, we got to move it around,” Suns coach Monty Williams said. “We know what [Booker] can do with the ball, but the one thing we talked about was getting to the paint, finding guys on the back side. We feel like that’s a formula. There were some times tonight where it just stuck a little bit and against their defense, they don’t have to work against that. So we can score in iso ball, but to make that defense work we got to move it around and in order to beat this team that’s what you got to do.”

This is not to say Booker deserves blame. He has been spectacular throughout the Suns’ playoff run and carried a huge burden recently. But this group is at its best when everyone on the floor is touching the ball, forcing defenders to rotate rather than load up on one guy.

“We have had ball movement in games,” Williams said. “There have been games where we haven’t made shots. Tonight, we were making shots whenever we wanted to, passes from side to side where the ball moved. There just wasn’t enough of that tonight. So that’s something that we can correct.”

There was certainly ball movement in the first quarter when the Suns hit 14 of their 19 field goal attempts and jumped out to a 37-21 lead. That advantage didn’t last long, though, as the Bucks chopped down the deficit from 16 to three by the 8:41 mark of the second quarter. Phoenix couldn’t get a stop, but it also didn’t have Booker on the floor for that important stretch. He sat to start the period and didn’t re-enter the game until there was 6:14 to go before the end of the first half.

“We have been a ball-movement team and sometimes the switching can cause you to do that,” Suns guard Chris Paul said of the stagnation. “We exploit it at times and sometimes we don’t. We’ll go back and look at the film and see what we could have did better.”

Phoenix is now on the brink of elimination, but the good news is that the offense requires tweaks, not a massive overhaul. One thing the Suns can do better: Create more opportunities from beyond the arc. After drilling 20 of their 40 3-point attempts in Game 2, the Suns have shot 31, 23 and 19 3-pointers in the past three NBA Finals contests.

“The ball, when it moved tonight, it looked like Suns basketball,” Williams said. “But we just didn’t generate enough threes.”

They also need to put together more stops, which will allow them to pick up easy transition points, particularly for role players who don’t typically generate their own offense. Any points that come outside of a half-court set are a big boost in the Finals.

The main objective for Phoenix is to break out of the typical offensive cycle.

Hand the ball to Booker. He attempts to score because no one else is doing anything. No one else does anything because the expectation is he will score. Lather, rinse, repeat.

Yes, Booker is talented enough to make it work for a few possessions, maybe even a quarter. But the Suns have learned it isn’t a recipe for success against the Bucks.