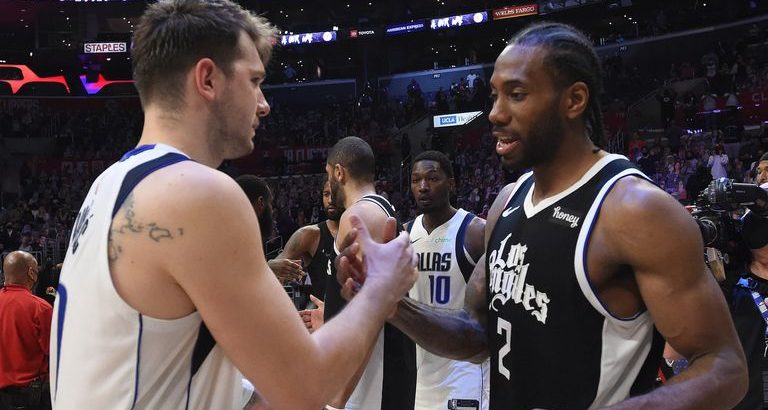 Kawhi Leonard paid tribute to Luka Doncic after the Slovenian ‘did everything’ to try and guide the Dallas Mavericks to victory over the Los Angeles Clippers in Game 7 of their first-round playoff series.

For the second straight year it was not to be as the Leonard-inspired Clippers drew on contributions from across the board to leave Doncic’s 46 points, 14 assists and seven rebounds in vain.

“Oh, man, you know, he did everything,” said Leonard. “I don’t know how many 40-point games he had, I believe three, three or four. You know, shooting it very efficiently from three for sure off the dribble shots. You know, just doing it all for his team. He’s a great player and you’ll see him for many years to come. He plays at his own pace and he makes it look easy out there.”

Leonard had taken over after seeing the Clippers slip to a 2-0 deficit, capping his team’s series comeback with 28 points, 10 rebounds and nine assists on Sunday night to help set up a Western Conference semi-final matchup with the Utah Jazz.

“Just staying focused,” he said, when asked of his approach on the night. “Knowing where my team-mates are, just staying poised. Just keeping faith, you know what I mean, just trying to win a basketball game, but at the same time, you have to be aggressive all night and don’t try to make the game be perfect.”

Doncic proved a constant and occasionally solitary thorn in the Clippers as he averaged 35.7 points, 7.9 rebounds and 10.3 assists across the series.

Again he lacked an accompanying superstar to rival the Leonard-Paul George tandem, while the Mavs role players struggled to match the production from that of the Clippers, Marcus Morris Sr. providing 23 points, Reggie Jackson chipping in with 15, Terance Mann 13, and Luke Kennard and Nicolas Batum 11 apiece for Los Angeles.

“I mean, you’re going to look every season you lose you’re going to think like that, you know, what can we do better, which games could we win? But that’s in the past you know, we’ve got to look forward to next season and get the mistakes out.”

Despite his standout performances, Doncic remained grounded as far as his achievements thus far in the NBA are concerned.

“I mean, nothing yet,” added Doncic after being asked what he proved against the Clippers. “We made the playoffs twice since I’ve been here. We lost both times, so at the end you get paid to win. So we didn’t do it.”

George continued in his bid to put his postseason struggles of the past behind him as he stepped up with 22 points, 10 assists and six rebounds, averaging 23 points across the series.

“They pushed us,” said George. “They definitely got us war ready. It was a great team we played, unbelievable superstar in Luka (Doncic). You know, they pushed us, they played really well, they challenged us but, you know, we stuck in there, we hung in there, we played or one another, we played hard and you know we continue on our season. On to the next.”