That strong start by the Los Angeles Lakers’ big men combined with a determined finish held off the Denver Nuggets, and the Lakers won Game 4 114-108 on Thursday.

Anthony Davis scored 19 of his game-high 34 points in the first half, and he and LeBron James combined for 19 of the Lakers’ 27 fourth-quarter points, with 13 points coming on foul shots.

The Lakers have a 3-1 series lead in the Western Conference finals and are now one victory from reaching the NBA Finals for the first time since 2010 – the last time the storied franchise won a championship. 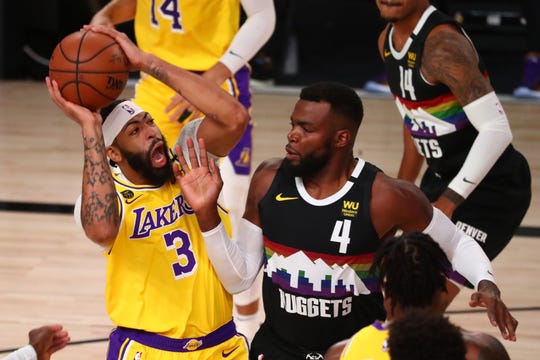 Davis was once again sensational and has been the Lakers’ best scorer against Denver. He has scored at least 30 points in three of the four games.

“I’m going to have to go through the proper channels like they did to get some more free throws,” said Nuggets coach Michael Malone, whose Denver team shot 23 free throws.

Denver guard Jamal Murray scored a team-high 32 points on 12-for-20 shooting – another stellar game from the 23-year-old who has morphed into a star in the bubble.

Los Angeles Clippers coach Doc Rivers gave the Nuggets an underappreciated compliment in the conference semifinals: Denver just keeps playing the same way down 20 or up 10. That constant energy keeps the Nuggets close most games.

That was true in Game 4. The Lakers could never shake the Nuggets, and it required a solid defensive effort in the fourth quarter. 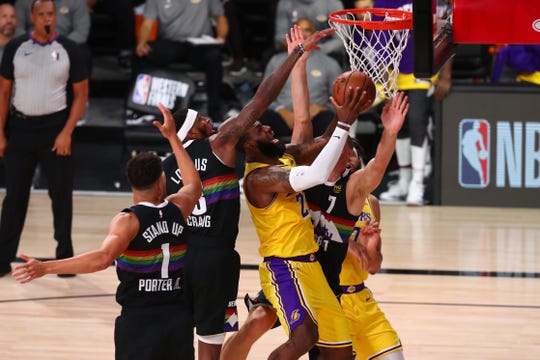 Lakers coach Frank Vogel wanted his team “to play harder. We've got to play tougher, more physical, with more hustle, quicker to loose balls. It starts there,” he said before the game.

The Lakers did just that as they took a 37-30 lead after one quarter. Davis made all six attempts and scored 14 points, and Howard had eight points and eight rebounds in the opening 12 minutes.