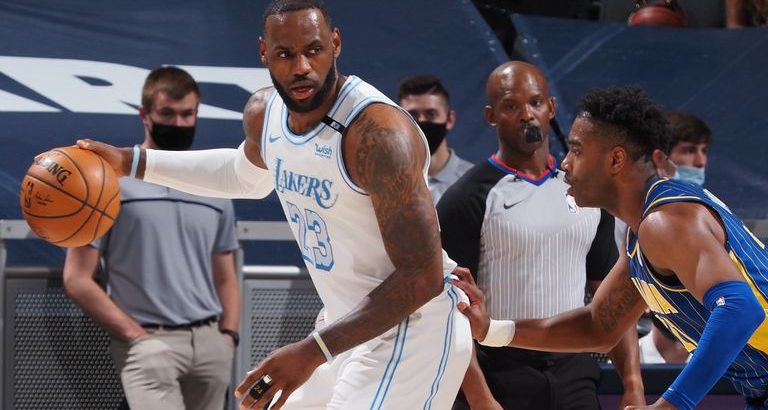 LeBron James took over late in the fourth period to ensure the Lakers go into Sunday’s game against the New Orleans Pelicans with their playoff hopes intact, while the Pacers losing sets up a dramatic finish for teams in the East.

LeBron James scored seven consecutive points over a one-minute stretch late in the fourth quarter to help the Los Angeles Lakers record a 122-115 win over the Pacers in Indianapolis.

James, playing his first game since May 2 and just his third since March 20, finished with 24 points, a team-high eight assists and seven rebounds.

Anthony Davis collected 28 points, 10 rebounds and five assists for the Lakers (41-30), who entered play a half-game behind the Portland Trail Blazers for the final guaranteed playoff bid in the Western Conference. Los Angeles finish the regular season on Sunday night in New Orleans.

The Lakers took care of business in the first half of the weekend back-to-back, leading Indiana (33-38) almost the entire way. But behind Caris LeVert’s 28 points and game-high 12 assists, the Pacers battled back from a deficit of as many as 14 points to pull within a single possession late in the fourth quarter.

LeVert hit a jumper with a little more than three minutes remaining, cutting the deficit to three points. James, who missed his first three three-point attempts, responded with a successful shot from beyond the arc on a step-back off a ball screen.

That three-pointer ignited a James run of seven consecutive points, pushing the Los Angeles lead back to eight points with 1:43 remaining. Indiana could not come within fewer than five points for the rest of the way.

The Lakers hadn't scored for 5 minutes and Indiana had just reeled off an 11-0 run.

Then LeBron hit three huge buckets to put them to bed.

Although the Pacers lost, Charlotte’s defeat at New York on Saturday keeps the teams tied for the No 8 seed in the Eastern Conference.

In what could be a playoff preview, Khris Middleton posted 21 points, seven rebounds and seven assists, leading the host Milwaukee Bucks past the Miami Heat 122-108.

Milwaukee, who are 11-3 in their past 14 games, also got 15 points, nine rebounds and four assists from two-time NBA MVP Giannis Antetokounmpo. Bryn Forbes had 21 points, Jrue Holiday had 20 points and Brook Lopez added 18 on 9-for-10 shooting.

Both teams play their regular-season finale on Sunday. But with all of the NBA scores complete on Saturday, Milwaukee (46-25) remained in third place in the Eastern Conference. The Heat (39-32) fell to sixth place, which – barring any change on Sunday – would match them with the Bucks in next week’s first round of the playoffs.

These teams have history. Last year, the Bucks had the best regular-season record in the NBA, but they were eliminated by the Heat in five games in the second round.

Miami on Saturday played without star point forward Jimmy Butler (lower-back tightness). The Heat are 33-19 with Butler this season but just 6-13 without their leader in scoring, assists and steals.

The Heat had their four-game win streak snapped, although Miami guard Kendrick Nunn scored a season-high 31 points. Nunn made 13-of-18 shots from the floor, including 4-of-5 on three-pointers.

Julius Randle collected his sixth triple-double of the season on Saturday and gave the host New York Knicks the lead for good by opening overtime with a pair of free throws as the Knicks remained in the mix for the fourth seed in the Eastern Conference with a 117-109 win over the Charlotte Hornets.

The Knicks (40-31) can finish fourth if they beat the Boston Celtics in Sunday’s season finale.

The Hornets (33-38) lost their fourth straight but got some help from the Los Angeles Lakers in their bid to finish eighth in the East. The Lakers’ win over the Indiana Pacers means Charlotte can lock up eighth place by beating the Washington Wizards on Sunday.

The seventh- and eighth-place teams in each conference only have to win one game in the Play-In Tournament to advance to the playoffs.

Randle had 33 points, 13 assists and 10 rebounds for the Knicks while Reggie Bullock scored 17 points. Derrick Rose (15 points), Alec Burks (14 points) and Immanuel Quickley (13 points) all got into double digits off the bench.

Kyrie Irving scored 22 points as the Brooklyn Nets got a significant contribution from their reserves and pulled away down the stretch for a 105-91 victory over the visiting Chicago Bulls in New York.

The Nets (47-24) won their third straight and moved one game ahead of the Milwaukee Bucks in the race for the No 2 seed in the Eastern Conference. Milwaukee hold the head-to-head tie-breaker with Brooklyn.

The game marked the first time Brooklyn’s three stars of Irving, James Harden and Kevin Durant played in the same game since February 13 at Golden State. It was the only eighth time they played together this season and the trio was on the floor together for about 16 minutes.

Irving was the most effective of Brooklyn’s trio by scoring 20 points in the first half when the Nets shook off an early 12-point deficit. Durant finished with 12 on 4-of-17 from the floor while collecting nine rebounds and six assists and Harden had five points, seven assists and five rebounds in 25 minutes.

Jeff Green added 19 points as Brooklyn got 48 points from their reserves, Bruce Brown chipped in 16 points and 12 rebounds as the Nets shot 47.1 per cent and outscored the Bulls 105-79 after allowing the game’s first 12 points.

Chicago (30-41) were eliminated from postseason contention on Friday night when the Washington Wizards beat the Cleveland Cavaliers so they held out Zach LaVine (knee soreness). Rookie Patrick Williams scored a career-high 24 points and former Net Thaddeus Young added 19 as the Bulls shot 34.7 per cent and misfired on 30 of 41 three-point tries.

Devin Booker scored 23 of his 27 points in the first half and the visiting Phoenix Suns took care of business with a lopsided 140-103 win against the short-handed San Antonio Spurs in the penultimate game of the regular season for both teams.

The win allowed the Suns (50-21) to keep pace with idle Utah (51-20) in the race for the top seed in the Western Conference. If Phoenix defeat the Spurs on Sunday in the second game of their back-to-back and Utah lose at Sacramento, the Suns will win the conference as they own the tie-breaker with the Jazz.

The Spurs (33-38) have already clinched the final spot in the Play-In Tournament and cannot improve their standing. San Antonio will play either Memphis or Golden State on the road on Wednesday.

Mikal Bridges added 18 points for the Suns, with Chris Paul scoring 16 and dishing out 10 assists. Dario Saric hit for 13 points and Cameron Payne had 12 for Phoenix. Deandre Ayton (left knee soreness) was held out for the Suns. Keldon Johnson and Gorgui Dieng scored 18 points each to lead the Spurs while Drew Eubanks added 15 points and 11 rebounds, and Devin Vassell hit for 14 points.

The Spurs, who have not had back-to-back nights off in a month and a half, decided to rest two of their starters, DeMar DeRozan and Jakob Poeltl. Five other players, including Dejounte Murray (back) and Rudy Gay (heel), were reported as injured.

Jayson Tatum scored 26 points and pulled down 11 rebounds to help the Boston Celtics snap a four-game losing streak with a 124-108 win over the host Minnesota Timberwolves.

Evan Fournier added 18 points and six assists and Luke Kornet had 12 points and six boards for Boston (36-35). Payton Pritchard and Grant Williams each scored 11 for the Celtics, who swept their two-game season series with Minnesota.

Boston wrap up the regular season on Sunday against the Knicks in New York. The seventh-place Celtics will then host the Eastern Conference’s eighth-place finisher in a Play-In game on Tuesday night for the right to earn the No 7 seed in the playoffs.

Karl-Anthony Towns led the Timberwolves (22-49) with 24 points and 14 rebounds. Anthony Edwards extended his franchise rookie record with his 35th game with 20 or more points, finishing with 23, six assists and three steals.

Minnesota lost their second straight game and have dropped four of their last six. The Timberwolves conclude their season on Sunday night at home against Dallas.