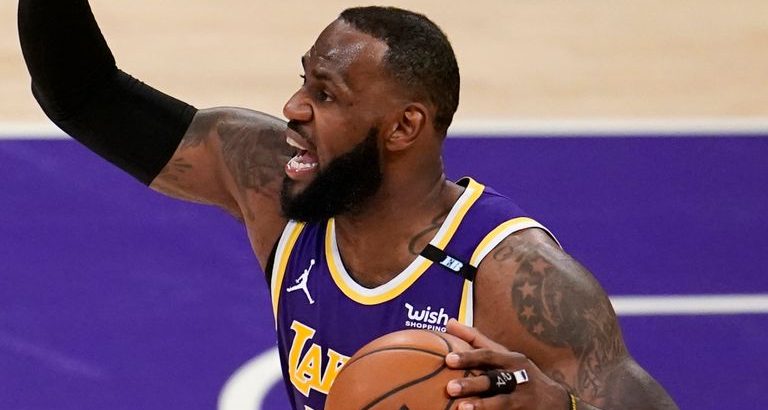 The Los Angeles Lakers could receive a jolt of energy this week with the return of the team’s talisman.

According to The Athletic, LeBron James is targeting Tuesday’s home contest against the New York Knicks for his return to the floor.

James missed 20 straight games after suffering a right, high-ankle sprain against the Atlanta Hawks on March 20, before returning from the injury at the end of April. He played in two games against the Sacramento Kings and Toronto Raptors, both losses for the Lakers.

The 17-time All-Star complained about sharp pain in his sore right ankle after the Raptors game, shutting it down for the last four games to allow for more time to let his ankle heal.

In all, James has missed 25 games this season, during which the Lakers are 10-15. Los Angeles are meanwhile 28-15 in games that James started this campaign.

Lakers forward Anthony Davis said James is close to returning after his team’s 123-110 victory over the Phoenix Suns on Sunday.

The Lakers (38-30) remain the No. 7 seed in the Western Conference and face a New York squad looking for a sweep of the L.A. teams following Sunday’s 106-100 win over the Clippers.

“The challenge for us to be hungry and don’t change now,” Knicks head coach Tom Thibodeau said. “This is what we’ve done all year. Just concentrate on improvement and our next opponent, and that’s what we’re looking forward to doing. I think we’re learning a lot on this trip. The toughness to win on the road and against these teams is telling us a lot, but there’s still a long way to go.”

Point guard Derrick Rose continues to have a rebirth in New York. Rose matched a season-high 25 points and dished out eight assists in his team’s win over the Clippers on Sunday. In his last five games, Rose is averaging 21.0 points and 4.6 assists a contest. Thibodeau coached Rose while with the Chicago Bulls and Minnesota Timberwolves.

“It was great for me to come here, get some of that young blood, that young energy,” Rose said about joining the Knicks in a trade back in February. “I just try to help these guys by being a mentor, being vocal and working on myself. And that’s being vocal. I never talked this much in the past. I’m steady trying to get better as a player and it’s going to help me in the offseason.”