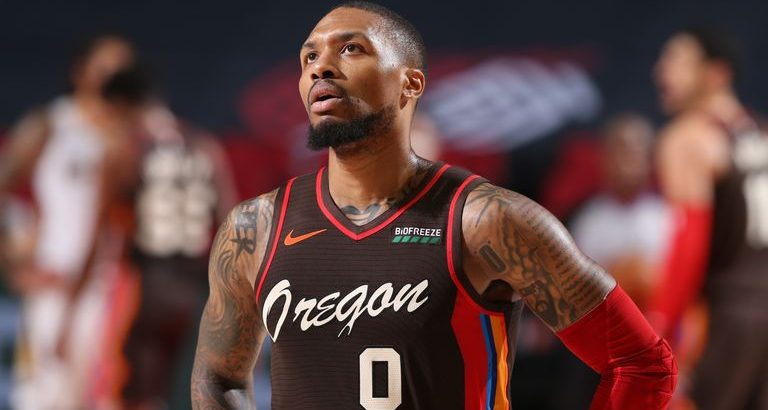 Traditionalists will say the Most Valuable Player is the best player on the best team in the league. Others feel that player can come from a team in the top two seeds of either conference, while some think an NBA team needs to win at least 50 games before any player on it is considered.

But that’s for an 82-game season. When the league is being played under normal circumstances. The 2020-21 season is neither of those.

There have been outliers who have won the MVP award: Russell Westbrook’s triple-double earned him the trophy in 2016-17 despite the Thunder winning just 47 games and Bill Walton played in just 70 per cent of games in 1977-78 when he won MVP.

Damian Lillard has only missed one game this year so far, and his Portland Trail Blazers are battling for the sixth seed. According to Basketball Reference, Lillard sits just outside the top-five MVP race.

His team is not setting the league on fire so it is understandable that their leader is not breaking through. On the flip side, the player leading Basketball Reference’s MVP tracker is Nikola Jokic of the Denver Nuggets, who match the Blazers 24-16 record.

The reason Jokic tops the list is due to the advanced analytics that historically predict the winner of the end-of-season award.

Tom Hall’s Double Clutch article highlights how Jokic leads the league in Box Plus Minus (BPM), which is the points per 100 possessions a player contributed above a league-average player, Value Over Replacement Player (VORP), Player Efficiency Rating (PER) and Win Shares per 48 minutes (WS48). So even if the Nuggets are not topping the standings at present, if Jokic’s team climbs up before the end of the season, he might well be the recipient of the MVP trophy.

In those same categories, Lillard sits fifth in VORP, 10th in BPM, eighth in WS48 and fourth in PER. It is this latter column – efficiency – where he stands out.

A few nights ago, Lillard scored 50 points on just 20 field goal attempts. Only two other players in the history of the NBA have achieved such a feat: another prolific scorer named Adrian Dantley, who put up 50 points on 17 shots in one game for the Utah Jazz in 1980; and the lesser known Willie Burton, who dropped 53 for the Philadelphia 76ers against his former club the Miami Heat in 1994, while attempting just 19 field goals.

Lillard is like Dantley: a pure scorer. The Blazer has the second highest scoring average this year with 30.5 points per game, just behind Bradley Beal of the Washington Wizards. It is a career best for Lillard, and it is needed with Portland’s hobbled squad.

The Trail Blazers have the eighth highest number of games missed by players in 2020-21, and it’s not as if the players that have missed those games are all scrubs. CJ McCollum returned on Tuesday to play just his 14th game this year after breaking his foot a few weeks into the season.

The team is optimistic that big man Jusuf Nurkic will also be fully recovered from his broken arm after managing just 12 games to start the season. Zach Collins is yet to make an appearance due to a stress fracture in his ankle, which came after a torn labrum saw him sit for the majority of the last campaign. Harry Giles is much lower in the rotation, but as the third-string big man, he would have been incredibly useful to make up for the loss of Collins and Nurkic these past four weeks.

This lack of bodies has seen the Trail Blazers play with a certain lack of height, which means very little rim protection. Their tallest player is Enes Kanter at 6ft 10in, who does not have the best reputation on the defensive end. His defensive rating on Basketball Reference suggests he allows the third lowest points per 100 possessions on the team, but he is not a natural defender and makes poor decisions with his positioning.

The defensive rating stat is misleading – it does not mean much on this team. The Blazers are among the worst in the league in terms of points allowed with 115.6 per game. The only teams allowing more points are the Washington Wizards, who sit 13th in the Eastern Conference standings, and the New Orleans Pelicans, Sacramento Kings and Minnesota Timberwolves, who are 11th, 13th and 15th in the Western Conference respectively.

This might seem bad, but it is still possible to be good even if you cannot stop anyone scoring. Just ask the Brooklyn Nets, who currently share the best record in the Eastern Conference and have not played with Kevin Durant for more than a month. They are allowing 115.3 points per game – essentially the same as Portland.

You can have a successful record with terrible defense by out-scoring your opponent. The Nets do it by scoring 120.6 points on average, more than five points better than they allow by opponents. The issue the Trail Blazers have is that they are scoring 115.1 per game, fewer than they are allowing.

A major reason for this is because for the past few weeks they have missed 25 points per game from McCollum and double figures from Nurkic. Carmelo Anthony has stepped up, and the former scoring champion has averaged 16.9 points in the past 10 games to make up for the loss of those team-mates. But for all his career achievements, Anthony will be 37 before the playoffs start, is still a negative on defense and is offering little else beyond a bit of help in the scoring column.

He is not doing much rebounding these days, but nobody on the team is – Kanter leads with 11.6 boards, 4.1 of which are offensive. The Blazers are among the bottom third in the league in rebounds, which means they struggle to put an end to their opponents’ possessions. But they also have a slower pace – playing 98.5 possessions per game, again in the bottom third.

When a team does not have a lot of scoring increasing the pace is an option, but Portland simply are not set up for it.

Without a positive net rating, without much of a rotation and with plenty of players missing games, the Blazers are 24-16, two wins from the fourth seed in the Western Conference.

It should not be possible. But they are that good because of Lillard.

Portland are on pace to finish with the equivalent of 50 wins. They might not be a top-two seed in the West, but if Portland finishes with a better record than the Denver Nuggets, why shouldn’t Lillard be rewarded for that?

People are bored of giving the MVP to Giannis Antetokounmpo. James Harden did not start the season with the team he is leading. Kevin Durant has not played enough. The LA Lakers struggles might be showing that LeBron James needs Anthony Davis to be the MVP of the team, and if that’s the case, it will be difficult to make him the MVP of the league. Joel Embiid might be out for several weeks due to injury.

It’s a long shot for Lillard, but is there anybody better in the league at pulling up from distance? Maybe, just maybe, it’s Dame’s time.