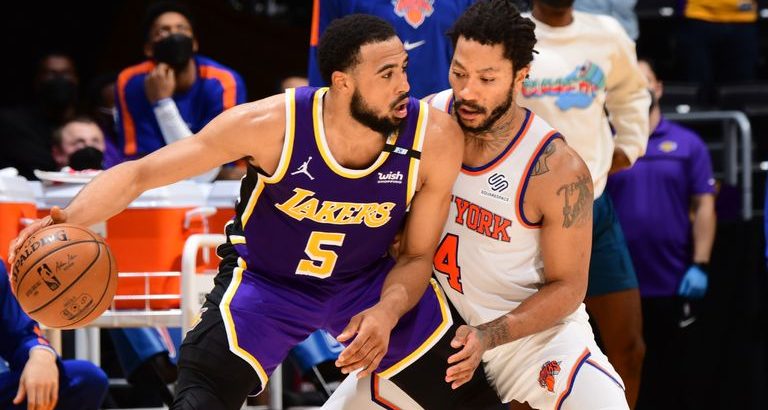 Talen Horton-Tucker hit the decisive 3-pointer with 21.1 seconds left in overtime, lifting the Los Angeles Lakers to a 101-99 victory over the visiting New York Knicks on Tuesday night.

The 20-year-old guard scored eight of his 13 points in extra time.

The seventh-place Lakers (39-30) pulled within one game of the Mavericks (40-29) in the chase for sixth place in the Western Conference after Dallas lost in Memphis. The top six teams clinch berths in the main draw of the playoffs while the seventh- through 10th-place teams head to a Play-In Tournament.

Kyle Kuzma paced the Lakers with 23 points. Anthony Davis added 20 points, and Andre Drummond chipped in with 16 points and 18 rebounds.

Lakers need to win 2 more games than the Blazers to avoid the play-in.

The Knicks (38-31) finished a six-game road swing 3-3. They play their final three games of the regular season at home.

It was a tightly contested, physical contest that featured 23 lead changes and 11 ties. Los Angeles improved to 5-1 in overtimes this season while the Knicks dropped to 3-2.

At the start of overtime, Horton-Tucker gave the Lakers a three-point lead on a corner 3-pointer, an advantage they held onto until Randle hit a 3-pointer with 1:11 left, putting the Knicks ahead by a point.

After Horton-Tucker’s go-ahead hoop, New York’s RJ Barrett missed a long 3-point try in the final seconds. Barrett also missed a shot for the win at the end of regulation.

"Every game for us is crucial. Guys came out and left it all on the floor."@AntDavis23 joined the TNT Tuesday crew after the @Lakers' big win. pic.twitter.com/cysMvrZS1l

Wiggins exploded for a game-high 38 points as the Warriors (37-33) completed a two-night sweep of the top two teams in the Western Conference to remain a half-game ahead of Memphis in their duel for the eighth position in the West’s Play-In Tournament.

Devin Booker went for a team-high 34 points for the Suns (48-21), who fell two games behind idle Utah atop the West with just three to play.

Playing the second night of a back-to-back following a 119-116 home win over Utah, the Warriors trailed by as many as 16 points before gradually reeling in the Suns, who lost for the third time in their last four outings.

Stephen Curry, bottled up for most of the game, completed a 21-point performance with a game-clinching 10-footer with 45.8 seconds remaining. That iced Golden State’s fourth straight win on a regular-season-ending, six-game homestand.

Wiggins’ 38-point night came up two points short of his season-best. He shot 17-for-24 from the field, helping make up for Curry’s uncharacteristic 7-for-22 night.

Golden State was able to win despite shooting just 11-for-40 on 3-pointers. Curry went just 1-for-11.

Poole finished with 20 points, Kent Bazemore 17 and Toscano-Anderson seven for the Warriors, while Draymond Green contributed a triple-double: 11 points and game-highs of 10 rebounds and 11 assists.

Paul totalled 24 points and Jae Crowder 20 for the Suns, who lost despite shooting 51.9 percent and outscoring Golden State 48-33 on 3-pointers. Paul completed a double-double with a team-high 10 assists.

Ja Morant recorded 24 points, eight assists and seven rebounds to lift the host Memphis Grizzlies to a 133-104 rout over the Dallas Mavericks.

Dillon Brooks scored 22 points with three steals and John Konchar added 18 for the Grizzlies (36-33), who posted their third straight win and fourth in five games on Tuesday despite playing without Jonas Valanciunas (back soreness) and Jaren Jackson Jr. (knee).

Kyle Anderson had 15 points and Brandon Clarke collected 14 points and nine rebounds as Memphis benefited from seven players scoring in double figures to avert a season sweep at the hands of Dallas. The Grizzlies shot 57.3 percent from the floor and 48.5 percent (16-for-33) from 3-point range.

Tim Hardaway Jr. scored 19 points, Willie Cauley-Stein added a season-high 16 and Jalen Brunson had 15 for the Mavericks (40-29), who saw their four-game winning streak come to a screeching halt.

Luka Doncic made just 4 of 16 shots from the floor to finish with 12 points.

He also gave the Mavericks a scare after he jumped over an advertising board and fell on the concrete floor while chasing a loose ball with 24 seconds left in the second quarter.

Michael Porter Jr. and Nikola Jokic pumped in 30 points apiece to carry the Denver Nuggets as they broke a two-game losing streak by defeating the host Charlotte Hornets 117-112.

Aaron Gordon provided 17 points as Denver (45-24) continued pursuit of rising to a top-three seed in the Western Conference. This was the beginning of a four-game road trip to cap the regular season.

The Hornets (33-36), who have three games remaining, are still trying to lock up a spot in the Eastern Conference Play-In round.

Graham finished with 31 points off the bench, thanks to 7-for-14 shooting from 3-point range, to lead Charlotte. Terry Rozier had 21 points, Jalen McDaniels and Cody Zeller (10 rebounds) both posted 15 points and P.J. Washington added 13 points for the Hornets.

Ivica Zubac added 18 points and 10 rebounds for the Clippers (46-23) in the opener of their four-game road trip as they try to clinch third place in the Western Conference.

Terance Mann had 20 points on 7-for-7 shooting off the bench for Los Angeles. Paul George had 16 points, Marcus Morris Sr. scored 14 points, Rajon Rondo had 11 points and Nicolas Batum had five points and nine rebounds.

Chris Boucher scored 16 points and had seven rebounds for the depleted Raptors, who have lost four in a row and were eliminated from playoff contention when the Indiana Pacers beat the Cleveland Cavaliers on Monday night.

Congrats to @RajonRondo of the @LAClippers for moving up to 14th on the all-time ASSISTS list! pic.twitter.com/HmeZ4rdpPX

Terence Davis came off the bench to score 27 points, leading the Sacramento Kings to a 122-106 home win over the Oklahoma City Thunder.

With their sixth victory in seven games, the Kings (31-38) kept their faint playoff hopes alive for at least another day. With three games remaining, Sacramento needs to win out and have the San Antonio Spurs lose the rest of their games to have a chance at making the Western Conference Play-In Tournament.

After trailing for much of the first half, the Kings blitzed the Thunder in the third, fuelled by a hot start and hot finish to the quarter by Delon Wright.

Wright scored 13 of his 21 points in the third, making all five of his field goals in the period. Buddy Hield also finished with 21 for the Kings.