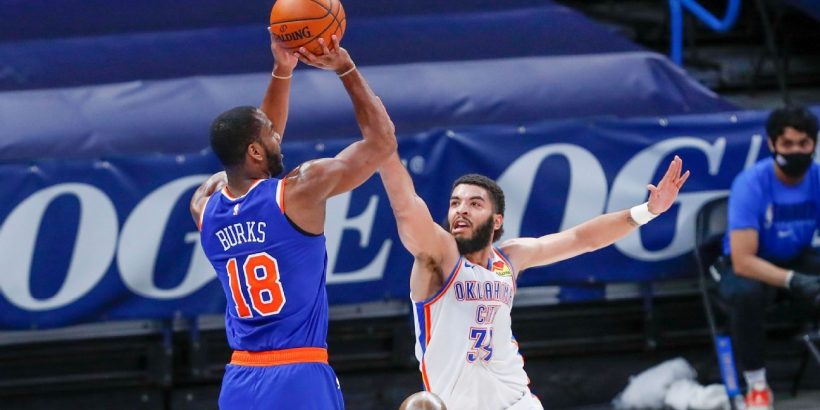 It’s time for the 10th Annual Luke Walton All-Stars, honoring journeymen and guys who have fought to stick in the NBA. (Learn about the origins of the column here.)

Brown walked into the Detroit Pistons practice facility in November when his phone blew up: After a solid second season, the Pistons were trading him to the Brooklyn Nets.

“I thought I was gonna be in Detroit a while,” Brown says. He walked in and said goodbye to staffers.

The Nets envisioned Brown as a switchable 3-and-D complement to Kevin Durant and Kyrie Irving. Brown struggled in camp, and began the season out of Steve Nash’s rotation. “I just wasn’t comfortable yet,” Brown says.

“I was already worried how he would fit in, because he is not a lights-out shooter,” says Jim Larranaga, Brown’s coach at the University of Miami.

Nash still felt Brown had a role. “Bruce plays his ass off,” Nash says. “He defends on a team without a lot of guys like that. How do we keep him on the floor?”

What if Brown could become a screener, effectively transforming into a center on offense? “I was not even halfway expecting anything like this,” Nash says. “But he jumped at the ask.”

Brown became an unconventional pick-and-roll partner for Durant, Irving, and eventually James Harden. (Detroit staffers privately joked that Harden wanted Brooklyn so he wouldn’t have to deal with Brown guarding him. In two head-to-head games, Harden was 2-of-11 with Brown defending him, per Second Spectrum.)

Even when one of Brooklyn’s centers hangs around the rim, Brown can zip inside for layups before the defense rotates.

“That’s not easy for a guard,” Nash says. “You’ve never done that in your life.”

Brown became adept at slinking into voids when his defender gawked at Brooklyn’s stars:

He has rebounded 9% of Brooklyn’s misses while on the floor, one of the 10 highest single-season offensive rebounding rates ever among players listed 6-foot-4 or shorter, per Basketball-Reference.

“It was really my only way to score,” he says. “The guy guarding me is trying to muck up the paint. Once I hit a few floaters, they gotta keep an eye on me.”

None of this surprises Brown’s coaches at the University of Miami. “He’s a glue guy,” Larranaga says. “He’s an amoeba. He changes form. He’s the best rebounding guard I’ve ever coached.”

They learned Brown’s no-frills nature as they recruited him. Brown would not answer Larranaga’s calls or texts. The coaches assumed Brown was not interested. Turned out, he was not interested in the fanfare. In the fall of his senior year, Brown phoned Larranaga and asked when Miami’s coaches were going to visit.

“‘Bruce, are you serious?'” Larranaga recalls replying. “‘You never answer!'”

Brown wanted to see which schools would persist amid his ghosting, he says.

Brown has endeared himself to Brooklyn’s stars with his no-drama approach and embrace of grunt work.