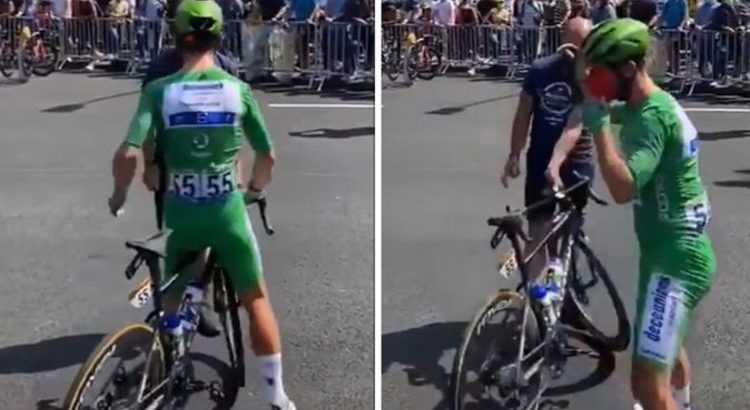 The Tour de France in numbers

Mark Cavendish had a heated row with his mechanic during the Tour de France, where he slammed his bike to the ground and stormed off onto the team bus. The 36-year-old yelled ‘f***ing hell!’ after an issue with his bike but, since the incident, he has apologised.

The video shows a mechanic trying to adjust the front of Cavendish’s bike, in the middle of the race.

Cavendish then tests it himself, before reacting furiously to the engineer.

The rider then screams ‘Sort it out’, before chucking his bike to the ground.

If he had recorded a victory on Friday, Cavendish would have set a new Tour de France record of 35 stage wins.

Despite failing to break the record, he has equalled Eddy Merckx’s 34 wins.

Cavendish took to social media to clear up what happened in the video, alongside a photo of him and his team.

“Many of you will have seen the video from the start of today’s stage,” he said on Instagram.

“During a day of the Tour de France, as riders we are put in a perilous situation and I wanted my bike to be perfect, in order to help me stay safe.

“My bike had some problems when I got on it this morning. Despite this, I should not have reacted in the way that I did and not so publicly.

“I’ve been extremely close friends with my mechanics for over a decade and they’ve worked tirelessly to ensure I’ve always been safe and successful.

“Although they know how short I can be when I’m stressed, no-one, especially those you care about, deserve to have a voice raised to them.

“Truly, one of the biggest factors of the success of [Deceuninck] is that we are a family, and we love and care for each other, and conversations should be kept within that family.

“We have now spoken about what happened and as a group the Wolfpack will do our best to have a successful finish to [the Tour De France].”

Cavendish’s remarkable return to cycling has been well-documented, after he came back from a broken shoulder and Epstein-Barr virus.

Despite not breaking Merckx’s record, the Brit will go down in history as one of the sport’s best cyclists.

The sprinter, who won his first ever stage at Chateauroux in 2008, hasn’t looked back.