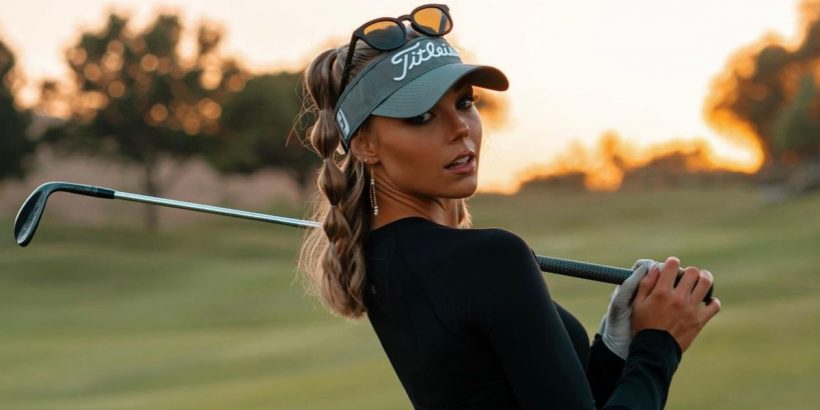 The term 'social media sensation' is often passed around these days, but few titles are more apt to describe Claire Hogle.

Well, maybe, sensation in waiting might be slightly better, as even her eye-watering 50,000 YouTube subscribers is relatively small in internet terms. But Hogle's golfing videos are taking the internet by storm, and she's already earned comparisons to Paige Spiranac.

Like Spiranac, Hogle has wowed with her stunning looks and she's handy on an 18-hole course too. The combination of the pair has landed Hogle an Instagram count just short of a sweet 500,000: but that number is only on the rise.

READ MORE: Golfer flirts with Paige Spiranac as he uses US Open club toss to shoot his shot

Hogle told Cougar's Corner, the College website: "My dad has played golf his entire life so I grew up around it, but I never played or pursued it. In eighth grade, my mom told me that I have to play at least one season of high school golf or else.

"So I played my one season which I prepared all summer for, and I really liked it. I didn't want to at first, but I ended up really liking it and pursued it to take it further."

What do you think of Hogle's snaps? Let us know in the comments section below. Hogle didn't go any further in her golfing career than at the collegiate level.

But the LPGA's loss – or the newly established LIV Tour for that matter – is Instagram's gain. Hogle regularly delights her fans with candid snaps, or short videos, on the course.

Her latest snap shows Hogle modelling on the fairway, sporting short shorts as she stares into the camera.

Hogle has been compared to blonde bombshell Paige Spiranac, who has paved the way for 'golfing influencers'.

Spiranac, like Hogle, played golf at the collegiate level, but she never went pro, instead, turning to social media to make a name for herself.