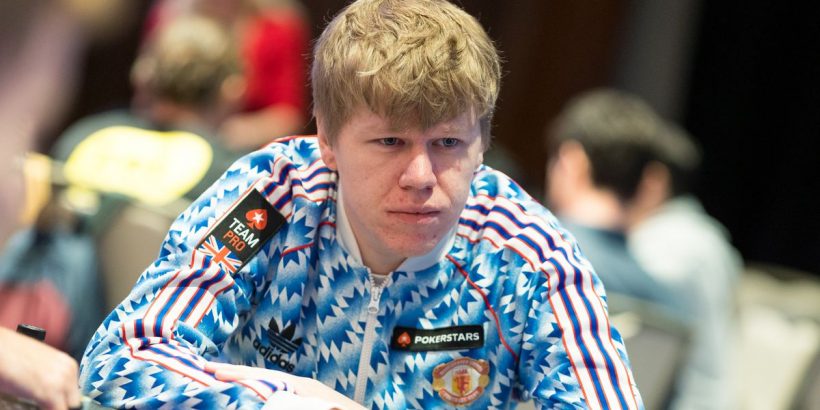 To those who haven't noticed the shift in the poker landscape over the past decade, the world of flashy jewellery, suits and green visors is long gone.

In fact, it is now the polar opposite. At this year's PokerStars European Poker Tour in London, the eventual winner of the main event, Ian Hamilton, was wearing a baggie hoodie and Burberry jacket while playing for hundreds of thousands of pounds.

It is the result of the online poker revolution, where whizzkids can now make millions by sitting in the loungewear at home. And it is behind a computer screen where Spragg, the award-winning poker streamer, has made his name.

Spragg meets us at the Hilton Hotel in Mayfair, London. But even he would be the first to admit he's not about glitz and glamour. In fact, barring a huge splurge on an Aston Martin Vantage V8, treating himself is not often a consideration.

READ NEXT: 'I used to spend my wages playing poker in underground bars – but now I've won £10m'

"I don't really spend any money on myself. I am not a very materialistic person at all," says Spragg, who has £145,000 in live earnings, as well as his mammoth online fortune.

"I get s*** from my friends because I wear the same pair of trainers for three or four years. Unless there is a hole in them, I'm not going to replace them.

"The Aston Martin was my one big treat or personal pleasure. I don't want to sound like one of them people on Instagram who says 'you don't see the work that I put in behind the scenes' and all that, but poker is very, very stressful and then building the stream, I streamed for a very small audience for a long time.

"So to eventually come through that, where I was streaming five or six days a week for like three years, to get the sponsorship and be doing ok in poker, to being able to afford something like that, it was very rewarding."

Spragg is the archetypal modern day poker success story. Like many, he began playing aged 18 with mates at university around the kitchen table. He got the bug for it and opened up a PokerStars account.

His parents backed his decision to give poker a go full-time when he left university – providing he was financially independent – and he has not looked back since. A landmark £40,000 win at a PokerStars UK and Ireland Poker Tour event in Galway in 2013 gave him a bankroll and from there he didn't look back.

Now 32, Spragg – and his Shaggy-esque haircut and range of Fila track tops – is one of the most recognisable faces in online poker with thanks to his award-winning stream, which has also earned him a place in PokerStars' coveted Team Pro.

Do you prefer playing poker in person or online? Let us know in the comments section.

To cater for his audience, he has gone from playing 24 tables at a time (yes, at the same time) down to about six, all in the name of entertainment.

"I only ever play six tables now when I am playing on the stream, just so it's a good balance of getting enough action in, but I'm not overwhelmed. Occasionally because of scheduling I'll have to play seven or eight, but you definitely notice a difference. Maybe it's my old age now! But six is definitely a sweet spot for me."

Spragg is not just a face in online poker; he also plays most of PokerStars' flagships events in Europe as part of his deal with them.

In London earlier this autumn, one player told him it was weird seeing him in real life. But that is not the only difference between playing online and live poker.

"I think online and live poker are mechanically the same game, but have very different approaches. When you're playing online, you're playing six, eight, 10, 12 tournaments at a time, you're seeing a lot of hands per hour," Spragg explains.

"You're busting and re-entering tournaments at a pretty high frequency. Things tend to move very quickly. Your mind is always in a pot, you're always playing.

"Gameplay is also different. You see a lot of different strategies in live poker. There is more of a homogeneous style online where players play a similar style, whereas in live poker, there might be a myriad of different things happening.

"Some guy might be on the phone for 10 minutes and you can see that he is angry and he starts playing every pot. You don't see that online. More than anything, it's just a mental shift."

Poker hit unwanted headlines back in the summer when an alleged cheating scandal got everyone talking. But Spragg, who makes his living from playing the game, believes there is very little for people to be worried about.

"I think that it is very, very rare when cheating is going on, in both online and live poker," he said.

"It is something that you have to be aware of but with PokerStars for example, it is one of the advantages of playing on a regulated site.

"I play exclusively on PokerStars, but with the game integrity departments that we have, are very, very good at what they do. They have a lot of ways to keeping that stuff in check, managing that stuff and staying one step ahead of that stuff. It is never really something that concerns me.

"From my perspective, the only way on the stream that I can get hit with game integrity is the delay being too short.

"As for cheating being a bigger problem in online poker, I think that as long as you are playing on regulated sites, you have enough protections in place that you should not be concerned. The danger comes when you play unregulated app games and stuff like that, where players aren't being checked or verified, because it's easier to collude.

"If it happens in a PokerStars game, it will get flagged pretty easily and then PokerStars will deal with it pretty quickly."