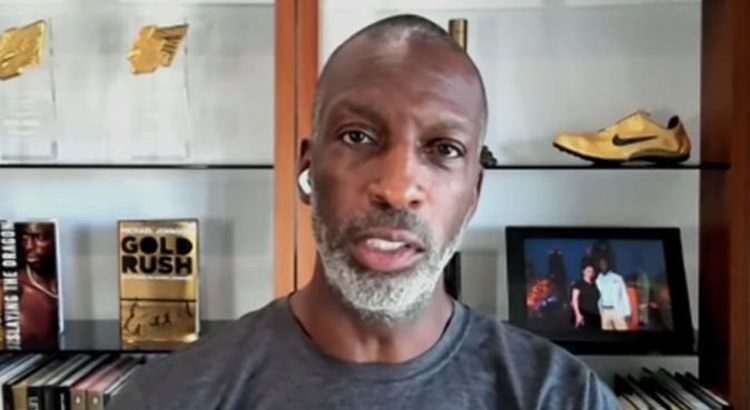 Michael Johnson, one of the Olympic Games’ all-time greats, is a pundit for the BBC during the Tokyo 2020 Games. The former US sprinter competed at three Olympic Games – Barcelona 1992, Atlanta 1996 and Sydney 2000, setting world records and winning four golds along the way. Now established as a central pundit to athletics coverage, he isn’t shy when it comes to giving his opinions on the on-track action.

This was seen during London 2012 when he made surprising comments regarding Team GB athletes that had previously represented other nations.

Around six months before the Games in London, Johnson said: “It’s hard to believe it when athletes who have tried to represent their country and couldn’t make that team turn round and claim that all along they wanted to represent Great Britain.

“It’s a hard sell. They have to live with that. My country is the only country that I could represent. If that meant that I could not make an Olympic team, that’s what it meant.”

The controversy was known as the “plastic Brits” row at the time, as reported by the Mail.

Athletes who had switched nationalities to Team GB included Yamile Aldama, who had already competed for her native Cuba and Sudan for the Athens Olympics.

Americans Tiffany Porter, a 100m hurdler, and 400m runner Shana Cox, both of whom switched their allegiance to Britain as well.

This has happened in a number of sports, however – England Euro 2020 hero Declan Rice had made three appearances for the Republic of Ireland before switching to England.

However, in football, you can only make this change if you haven’t represented your first country in a competitive match.

He came under fire for picking athletes who had previously represented other nations, but Johnson said it was the fault of the rules, not Van Commenee.

The former US sprinter said: “Is he operating inside the rules of the sport? Yes.

“It’s unfair to say to him, ‘You are allowed to do this under IAAF rules and other countries do it, but we don’t want you to do it’. And then to say, ‘But we do want you to bring home as many medals as you can’.

“You can’t fault Van Commenee for the selection of what you call ‘Plastic Brits’. That’s the pool he has to pick from and he’s going to pick the best athletes.

“He has to. If not, he’d be discriminating by making a judgment that someone is a better Brit than somebody else. If you have a problem with athletes from other countries who don’t really have any connection with the UK, then target the rules; not Van Commenee.”