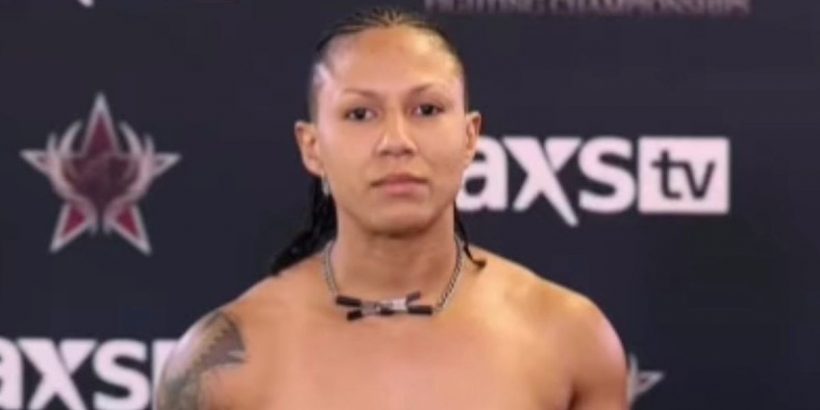 Mixed martial arts star Helen Peralta has staged a topless "f*** Disney" protest at the weigh-in for her latest fight.

Ahead of taking on Poliana Botelho in Invicta FC on Thursday night, the Dominican fighter hit the scales topless with the words "f*** Disney" written on tape covering her nipples. It is currently unclear what the motivation behind Peralta's stunt is but has come in the same year Disney workers staged a walk out over the company's response to Florida's so-called "Don't Say Gay" bill.

Peralta later posted a cryptic message on Instagram as she shared a clip from the weigh-in with her followers.

READ MORE: Two Brit stars on PFL's 'richest night in MMA' with £5.5million on the line in New York

"Those who know know," she wrote in the caption. "Those who don’t know will find out. And for those who don’t want to know, go back to your regularly scheduled programming. This is just a glitch in the matrix. If you found me offensive, I’m not sorry. Just imagine a pound of silicone under each breast and boom , Now I’m just … brave."

It is not the first time Peralta has staged such a protest, either, as she also went topless for a weigh-in on The Ultimate Fighter earlier this year.

The 34-year-old was a contestant on the latest series of the UFC's hit reality show but was beaten via split decision in her first fight against Kaytlin Neil.

What is the strangest thing you have seen at an MMA weigh-in? Let us know in the comments section below.

According to fellow contestant Zac Pauga, she attempted the same weigh-in antics before being told by producers to hit the scales again with a shirt on. The producers' opposition is said to be due to the show being aired on ESPN, which is owned by Disney.

Pauga confirmed the incident on Twitter, writing: “I’ll give you the background! She did this for her fight on TUF 30 but the producers cut it and made her weigh in again after making weight just for the cameras. Funniest moment of the season and they cut it because ESPN is a Disney-owned company.”

Although it is unknown if her stunts are related to the Disney walkout, but her attempted protest on TUF came just one month after the employee walkout.

Unfortunately for Peralta, she was unable to claim a third consecutive win inside the cage at the Sugar Creek Casino in Oklahoma on Thursday.

Her flyweight bout with Botelho at Invicta FC 49 did go the distance, though, before judges scored the contest unanimously in favour of Botelho.

The defeat is Peralta's second with the promotion, in what was her first professional bout since January, and leaves her with a record of 5-3.