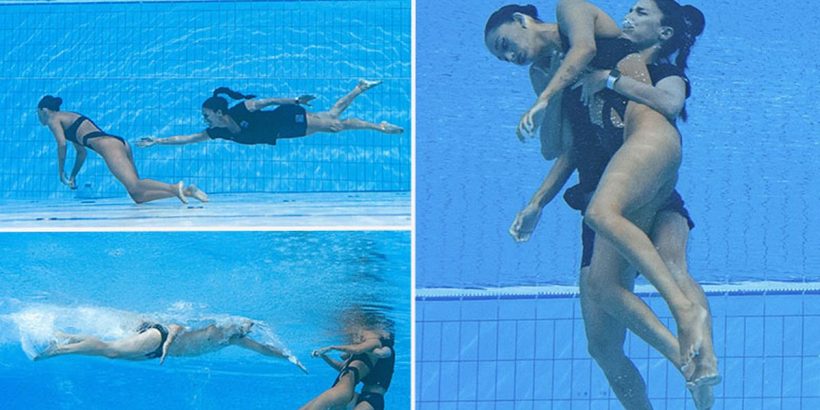 This is the jaw-dropping moment professional swimmer Anita Alvarez fainted in the water at the World Championships and had to be rescued by her coach.

The 25-year-old synchronised swimmer was competing in the final of the women's solo free event in Budapest, but then she became unconscious and dropped to the bottom of the pool. Luckily, heroic coach Andrea Fuentes was on hand and dived in, before dragging her to safety.

Alvarez regained consciousness as the medical team swarmed in and she received first-aid. She is now supposed to be recovering well. But it is not the first time that the American swimmer has fainted during a competition. In 2021 during the Olympics qualifying event in Barcelona, Fuentes came to her aid also when she lost consciousness.

READ MORE: Meet the athlete who went from the Olympics to number two-ranked escort in Las Vegas

There is no reason why she fainted, but synchronised swimmers have to hold their breath for long periods underwater.

“It was a big scare. I had to jump in because the lifeguards weren't doing it,' coach Fuentes said following the incident. “I was scared because I saw she wasn't breathing, but now she is doing very well. Anita is doing much better.

“We sometimes forget that this happens in other high-endurance sports. Marathon, cycling, cross country… we have all seen images, where some athletes don't make it to the finish line and others, help them to get there.

“Our sport is no different to others, just in a pool, we push through limits and sometimes we find them. Anita feels good now and the doctors also say she is okay. Tomorrow she will rest all day and decide with the doctor if she can swim free team finals or not.

"Anita is okay – the doctors checked all vitals and everything is normal: heart rate, oxygen, sugar levels, blood pressure, etc… all is okay,” she continued.

Common causes for fainting include standing up too quickly, low blood pressure, lack of food or water, and substances like alcohol and drugs. But if regular fainting persists, it should be checked by a doctor.