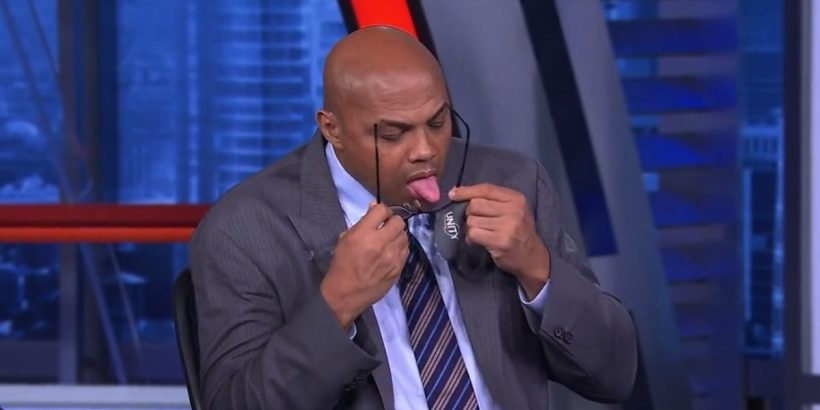 NBA legend Charles Barkley has left basketball fans sickened after he displayed a licking act live on television during Inside the NBA.

Barkley was amongst the panellists for last Thursday's edition of the show, appearing alongside Shaquille O'Neal, Ernie Johnson and Kenny Smith.

However, it was not any of his analysis that left viewers shocked and instead how he chose to clean his glasses during half-time of the game between the Phoenix Suns and the Dallas Mavericks.

Fans quickly took to social media to react to what they had seen and were soon mocking the former Philadelphia 76ers power forward.

Before being shown footage from the game, Barkley was caught on camera opening a glasses case and grabbing a cloth to clean the contents of the case.

Ahead of cleaning his glasses, though, Barkley lifted the glasses up to his face and licked the lenses before wiping them clean.

After footage of the incident was uploaded to Twitter, fans soon began to comment GIFs of people licking windows as they poked fun at Barkley's cleaning technique.

What is the most bizarre thing you have seen an athlete do? Let us know in the comments section below.

The analysts in the studio also watched back the clip in the studio, with Barkley explaining "that's how I clean my glasses."

Presenter Johnson was unimpressed and replied: "Come on, Chuck. That's not how you're supposed to clean your glasses."

However, Barkley stood by his technique, answering back by saying: "I need to be able to see, man. It's more important for me to see than worry about hygiene."

Barkley spent 16 years in the NBA after being chosen as the fifth overall pick by the 76ers in the first round of the 1984 draft.

He also went on to play for both the Suns and the Houston Rockets before retiring in 2000, but never won an NBA championship.

The 11-time all-star is a two-time Olympic gold medallist, though, having been part of Team USA at both the 1992 and 1996 games as well as being a member of the Basketball Hall of Fame.