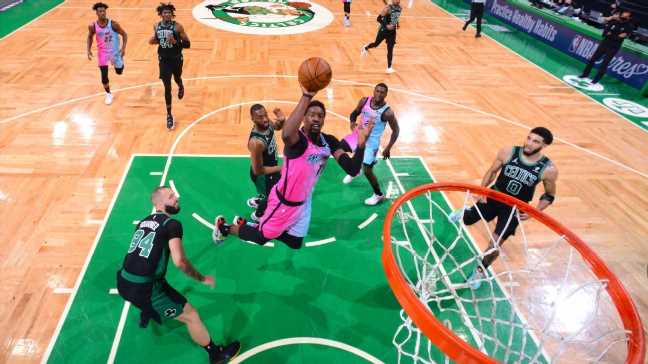 • How the play-in tournament will work

Game 2: No. 10 Indiana at No. 9 Washington — winner moves on in play-in; loser is eliminated

Game 3: Indiana/Washington winner at Boston/Charlotte loser — winner is No. 8 seed in playoffs

Here’s a breakdown of all the key games from Sunday and what the results mean for the seedings:

The Celtics hosted the Miami Heat Sunday afternoon in a game that would go a long way toward determining which of these two teams would have a shot at reaching the 4-5 series in the Eastern Conference playoff picture and which would be headed toward an appearance in the NBA’s first-ever play-in tournament.

It didn’t take long to figure out which way things would go.

The Heat jumped out to an early double-digit lead and never looked back, leading wire-to-wire in a 130-124 victory at TD Garden. Miami, which led by 26 at halftime, is now tied with the Atlanta Hawks for fifth in the East, with the Heat sitting two games ahead of the Celtics in seventh with four games to play.

Miami and Boston will play again at TD Garden on Tuesday night in a truly massive game, with the winner clinching the tiebreaker — and, if Miami wins, virtually guaranteeing Boston will take part in the play-in tournament.

If Boston loses Tuesday, both Miami and Atlanta would possess the tiebreaker and be up at least two games in the loss column with three to play, leaving only a complete collapse by the New York Knicks, Boston’s opponent in the regular season finale a week from Sunday, as a possible path out of the play-in for the Celtics.

As it stands, Sunday’s loss left Boston, according to ESPN’s Basketball Power Index, with an 81 percent chance of being in the play-in tournament.

The race for spots 4-6 in the East, however, is going to be complex. New York sits a game in front of Miami and Atlanta in the East standings after the Knicks edged the Clippers on Sunday.

And while of immediate concern to all three teams would be avoiding the play-in, they also would love to get into a 4-5 series and avoid having to play either the Milwaukee Bucks or Brooklyn Nets in the first round — only adding to the stakes for what should be a frenetic final few days of the regular season. — Tim Bontemps

Every game is big for the Lakers right now, but getting one that maybe you didn’t expect is massive. The performance from Anthony Davis on Sunday against the Suns — 42 points on 13-27 shooting, 12 rebounds, 5 assists, 3 blocks and 3 steals — keeps the Lakers in the mix to stay out of the play-in game.

So it’s an uphill climb, but the hill looked almost too steep to scale entering the game on Sunday against one of the West’s best. There’s still reason to believe. — Royce Young

The San Antonio Spurs are leaving the door open for the Pelicans to sneak into the play-in tournament and Sunday’s win over the Hornets gives the Pelicans a much-needed boost. New Orleans now sits just 1½ back of the Spurs with four games to play. It helps that San Antonio’s final five games are tough (vs. Milwaukee, at Brooklyn, at New York, vs. Phoenix and vs. Phoenix) but New Orleans is running out of time — and it doesn’t help that Zion Williamson is out with a fractured left ring finger.

The loss puts Charlotte two games back of the Celtics for the seventh seed and the Hornets are just a game ahead on the Wizards with four to play. Charlotte and Washington meet on the final day of the regular season but the Hornets have a tough road in their three games prior to that with home games against Denver and the Clippers before a road game against the Knicks. — Andrew Lopez

The Mavericks strengthened their grip on fifth place in the Western Conference with the win over the Cavaliers.

Dallas, which has won 10 of its last 12 games to improve to 40-28, holds a one-game lead over the Portland Trail Blazers with four games remaining on their regular-season schedule. Portland owns the tiebreaker between the teams.

No change in the seedings from this game. Derrick Rose had 25 points in the win, including 19 in the first half.