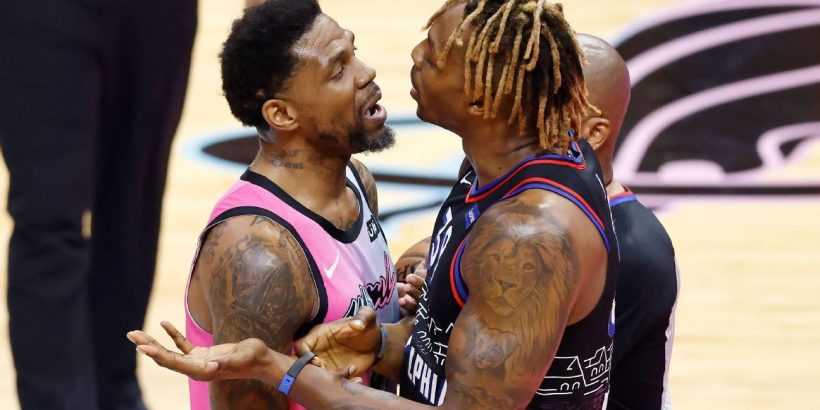 • How the play-in tournament will work

Game 2: No. 10 Washington at No. 9 Indiana — winner moves on in play-in; loser is eliminated

Game 3: Washington/Indiana winner at Boston/Charlotte loser — winner is No. 8 seed in playoffs

Here’s a breakdown of the key games from Thursday and what the results mean for the seedings:

In the race to finish fourth in the East, wins across the board left things status quo among the Atlanta Hawks, Miami Heat and New York Knicks Thursday night.

The Hawks took a big step toward securing that fourth seed with an emphatic 116-93 win over the hapless Orlando Magic. The win leaves Atlanta with one final game on Sunday against the league-worst Houston Rockets. If Atlanta wins that game, and the Knicks and Heat win out, the Hawks will win the Southeast Division and clinch the fourth seed.

The Miami Heat, meanwhile, blew out the Philadelphia 76ers, keeping them in line to finish fifth. Miami owns the tiebreaker over the New York Knicks, so if all three teams remain tied until the end of the regular season, Miami would get the fifth seed. The Heat have two games left — at Milwaukee on Saturday and at Detroit on Sunday.

New York picked up a victory, as well, though it was a far more difficult one to get, as the Knicks eventually came away with a 102-98 victory over the San Antonio Spurs at Madison Square Garden.

The Knicks play the Charlotte Hornets on Saturday, and the Boston Celtics on Sunday.

If two of the trio of Atlanta, New York and Miami are tied at the end of the season, here are how the tiebreaker scenarios break out:

Charlotte and Indiana losing Thursday night also officially locks the Celtics into the seventh seed in the East, and they will host the 7-8 game in the NBA’s inaugural play-in tournament next Tuesday. Charlotte and Indiana are tied with 33 wins, while the Washington Wizards have 32. — Tim Bontemps

With the Chicago Bulls beating the Toronto Raptors Thursday night, Chicago still has very slim hopes of making the play-in tournament. It would still require a lot — the Wizards losing their final two games, and the Bulls winning their final two — but that’s better than having no chance at all.

The Sacramento Kings, on the other hand, don’t have a chance at all after losing to the Memphis Grizzlies Thursday night. The Kings needed to win out and the Spurs needed to lose out, but Thursday’s loss will officially extend Sacramento’s league-leading playoff drought to 15 years. The Spurs, meanwhile, backed into the No. 10 slot in the West.

Memphis kept itself in the running for the chance to finish with the eighth seed in the Western Conference with the win. If the Grizzlies beat the Kings again Friday, it will ensure that Sunday’s game against the Golden State Warriors will be, essentially, a one-game playoff for the eighth playoff spot in the West, which means the difference between having to win one of two games to make the playoffs, or having to win two in a row. — Bontemps

With help from Batum, the Clippers played better than they have of late and continue to hold on to the third seed ahead of Denver with two games remaining at Houston and Oklahoma City.

For the Hornets, this was a game they needed. They remain tied with the Indiana Pacers. Charlotte, which owns the tiebreaker for the No. 8 seed over Indiana, has lost three straight and can use Miles Bridges back for the final two games of the season against the Knicks and Wizards. — Ohm Youngmisuk