Anthony Davis had his second consecutive 40-plus point game as the host New Orleans Pelicans cooled off the Oklahoma City Thunder 118-114 on Wednesday night.

Davis, who had 41 points in a loss at Boston on Monday, scored a season-high with 44 points and added 18 rebounds as the Pelicans alternated wins and losses for the ninth consecutive game. 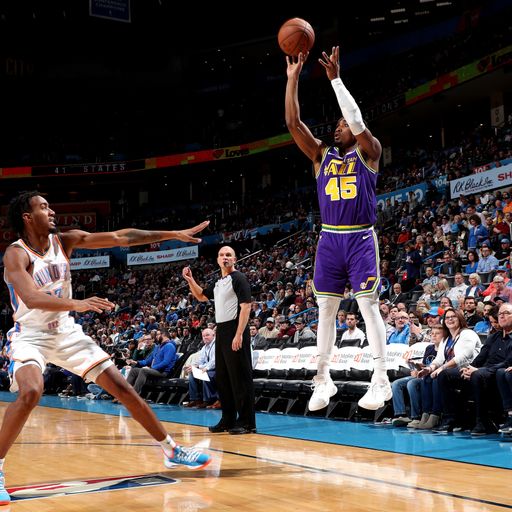 Julius Randle added 22 points and 12 rebounds, Jrue Holiday had 20 points and 10 assists and Darius Miller came off the bench to score 10 points.

Paul George had 25 points and 11 rebounds to lead the Thunder, who had won five of their previous six games. Dennis Schroder came off the bench to score 24 points, and Russell Westbrook and Steven Adams had 20 points each.

Two turnovers by Holiday led to a lay-up by Westbrook and a three-point play by George that got the Thunder within 116-114 with 48 seconds left.

After Davis missed, Oklahoma City had a chance to tie or go ahead, but Westbrook missed a three-pointer and Randle rebounded and was fouled. He missed both free throws with 10 seconds left.

Kyrie Irving hit a tie-breaking, 31-foot three-pointer with 17 seconds remaining in overtime as the visiting Boston Celtics held off the Washington Wizards 130-125.

Bradley Beal and John Wall both missed three-point attempts to tie the score before Irving closed out Boston’s victory with two free throws.

Irving’s three-pointer with 38.6 seconds left gave the Celtics a two-point lead, but John Wall’s jumper tied it with 30.7 seconds to go. 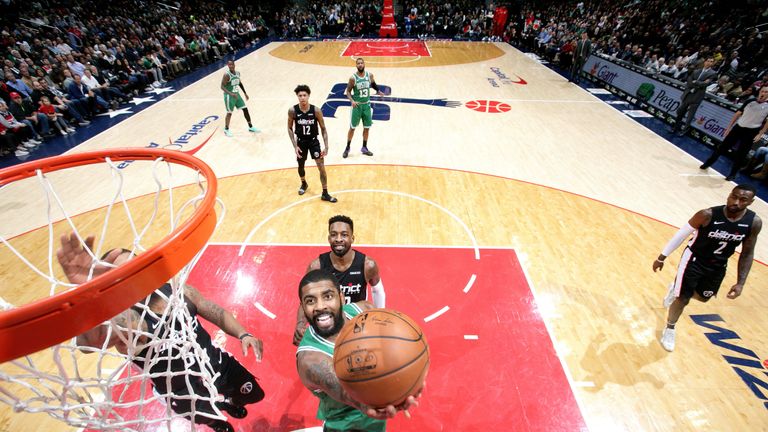 Wall, who returned after missing one game with bone spurs in his left heel, led the Wizards with 34 points and 13 assists, continually driving for baskets over the final minutes of regulation and overtime.

Beal and Jeff Green scored 22 points each for the Wizards, and Kelly Oubre Jr added 20 points.

Beal tied the score 113-113 with 11.3 seconds remaining in regulation when he made a free throw, then got the rebound of his subsequent missed free throw and scored. Irving missed on a drive into traffic at the buzzer.

Harrison Barnes scored 25 points as the Dallas Mavericks extended their winning streak to three games with a 114-107 victory over the visiting Atlanta Hawks.

Barnes, who was out with a hamstring injury when the teams met in October, was 8-for-16 from the floor and 5-for-8 on three-pointers. The Mavs are now 6-1 when Barnes scores 20 points.

The Mavs also got 24 points from rookie Luka Doncic, who shot 12-for-15 from the free throw line and added 10 rebounds and six assists. It is the 13th time he has scored 20 or more points.

Atlanta got a double-double from John Collins for the fifth straight game. The second-year forward had 20 points, shooting 10-for-22, and grabbed 17 rebounds.

The Hawks also got 22 points and five rebounds from Kent Bazemore and 24 points and 10 assists from rookie Trae Young.

Jeremy Lamb hit a 20-footer with 0.3 seconds remaining as the Charlotte Hornets rallied for a bizarre 108-107 victory over the visiting Detroit Pistons.

Lamb’s heroics came after the Hornets stormed back from a 10-point deficit with just over six minutes to play.

The Hornets played for one final shot after Detroit’s Langston Galloway hit two free throws for a 106-106 tie with 14.7 seconds left, and Lamb took a pass from a driving Kemba Walker as the clock wound down. 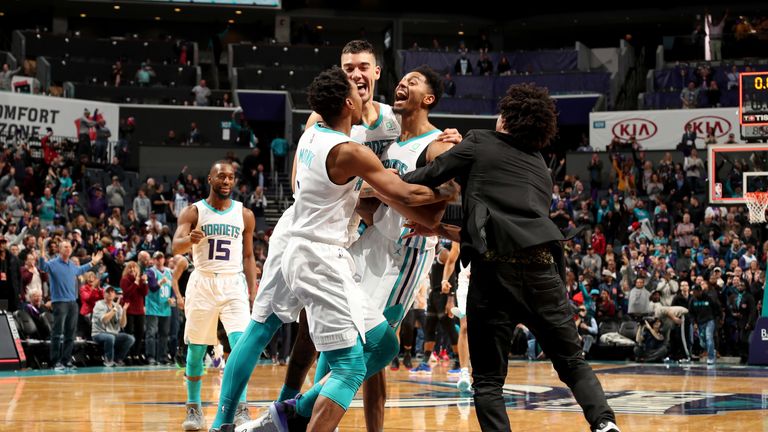 The Hornets were called for a technical foul for having too many players on the court after Lamb’s shot, and Galloway hit a free throw with 0.3 remaining to cut the margin to one.

But the Pistons could not get a final shot off before the buzzer.

The win was the Hornets (14-13) third straight, marking the first time this season they’ve won three in a row. It also moved the Hornets past Detroit (13-13) for sixth place in the Eastern Conference standings.

Rodney Hood hit the go-ahead jumper with 23.7 seconds remaining as the Cleveland Cavaliers lost a 22-point lead before escaping with a 113-106 victory over the visiting New York Knicks.

The Cavaliers led by 22 with 6:54 left in the second quarter but gradually let the Knicks rally. They trailed 106-105 after rookie Kevin Knox finished off a transition play with a left-handed dunk off a bounce pass from Emmanuel Mudiay with 32.5 seconds to go.

On the next possession, Hood took the inbounds pass and moved around a screen by Larry Nance Jr. He moved to his right, executed a spin move and released an 11-foot turnaround shot from inside the paint over Frank Ntilikina.

With two free throws from Matthew Dellavedova, Cleveland iced their 13th win in the last 15 meetings with the Knicks.

Jordan Clarkson led all scorers with 28 points, while Hood added 23 as Cleveland shot 47.3 per cent while getting outscored 75-60 over the final 30:54.

Spencer Dinwiddie scored a career-high 39 points to lift the visiting Brooklyn Nets past the Philadelphia 76ers 127-124.

Allen Crabbe added 20 points and Joe Harris had 14 as the Nets handed the Sixers a rare home loss.

The Sixers had been 14-1 at home this season with the previous lone defeat to the Cleveland Cavaliers. The 127 points were a season high for the Nets.

Joel Embiid paced the Sixers with 33 points and 17 rebounds while Ben Simmons added 22 points. Furkan Korkmaz had 18 points and TJ McConnell had 17. 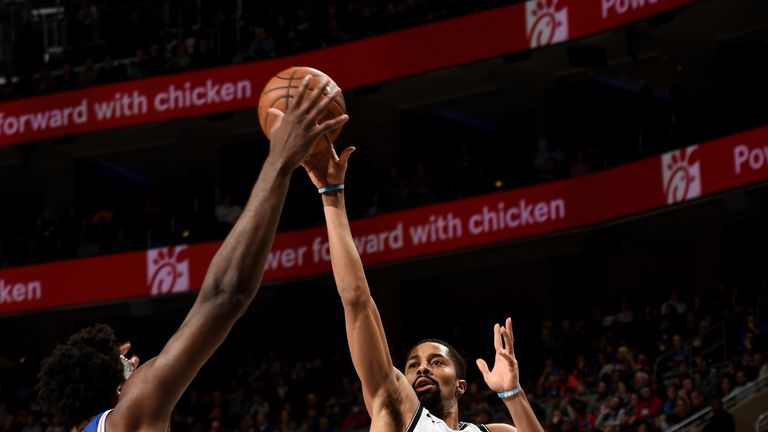 After the 17th Philadelphia turnover, Dinwiddie dribbled around Embiid and scored for a 115-105 lead with 2:02 left. It was more than enough of a lead to propel the Nets to a road win despite three late Landry Shamet three-pointers pulling the Sixers within four in the final 30 seconds.

Mike Conley collected 23 points, six rebounds and six assists as the Memphis Grizzlies used a late 13-0 run to break open a tight game on the way to a 92-83 victory over the visiting Portland Trail Blazers.

Marc Gasol contributed nine points, seven rebounds, six blocked shots and five assists for the Grizzlies, who had lost six of their previous nine games, including the previous two.

CJ McCollum matched his season high by scoring 40 points for the Trail Blazers, who dropped their sixth consecutive road game. Damian Lillard and Jusuf Nurkic combined for 5-for-33 shooting for Portland, who have lost 10 of their last 15 outings overall.

Thaddeus Young scored 25 points and Myles Turner added 23 points as the Indiana Pacers led wire-to-wire in a 113-97 win over the visiting Milwaukee Bucks.

Young added 11 rebounds, four assists and five steals as Indiana won their fifth straight game and avenged a 118-101 loss in Milwaukee’s first game in their new arena in October.

Victor Oladipo was back in the Pacers lineup after missing the past 10 games with right knee soreness. Oladipo scored 12 points and had 10 rebounds to go along with six assists. His presence gave the Pacers a spark. 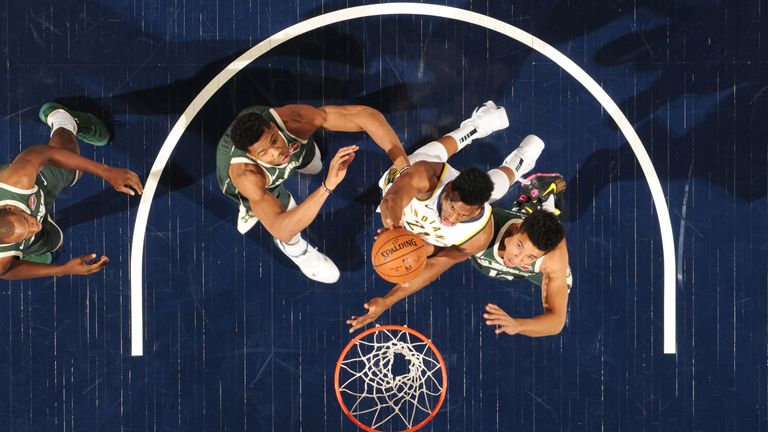 Milwaukee entered the game with the league’s No 1 scoring offense while Indiana boasted the league’s stingiest defense. On this night, defense won out.

The Pacers held the Bucks to just 41.3 per cent from the floor as Milwaukee made just 11 of their 43 three-point attempts.

Giannis Antetokounmpo scored a season-low 12 points. Antetokounmpo did record 10 rebounds and seven assists, but shot only 4-of-7 from the field.

Donovan Mitchell scored 21 points to lead a balanced offensive effort that lifted the Utah Jazz to a 111-84 victory over the visiting Miami Heat.

Miami (11-16) dropped a game to the Jazz for the first time since the 2015-16 season, snapping the team’s four-game winning streak over Utah.

Nemanja Bjelica poured in 25 points to lead the Sacramento Kings to a 141-130 win over the visiting Minnesota Timberwolves.

Bjelica came up huge at crucial moments throughout the contest, including in the final minutes, to help shut down any run from his former squad.

Buddy Hield and Bogdan Bogdanovic each scored 20 points for the Kings. Marvin Bagley gave Sacramento a boost with 17 points and 10 rebounds in 26 minutes off the bench, providing many high-energy plays.

Yogi Ferrell finished with 17 points on 5-of-6 shooting and added six assists in just 16 minutes off the bench for the Kings, who have won five of their past six games.

Andrew Wiggins led Minnesota with 25 points, and Derrick Rose scored 20. Karl-Anthony Towns contributed 19 points and 11 rebounds for the Timberwolves, who also got a double-double from Jeff Teague (12 points, 13 assists).

Minnesota lost its third game in a row following a stretch of six wins in seven outings. 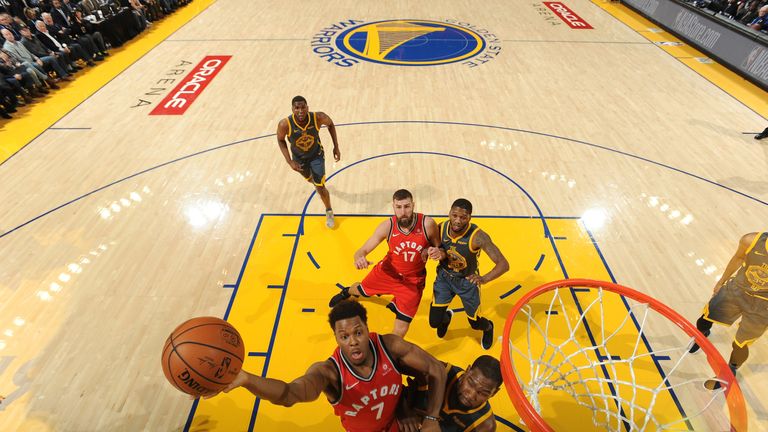 What channel is the NBA All-Star Game on today? Time, rosters & more for Team LeBron vs. Team Giannis

How many games will the Atlanta Braves win in 2020?

Mourinho creeps up on Terry before Tottenham face Aston Villa