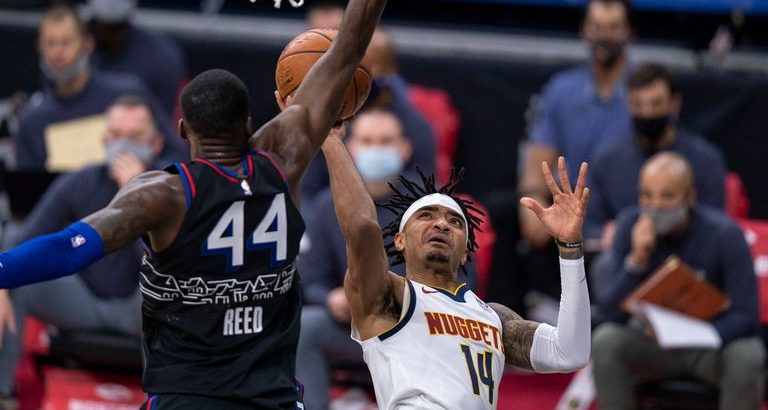 The Denver Nuggets snapped a depleted Philadelphia 76ers 20-game winning streak at home as rookie LaMelo Ball became the youngest player in NBA history to land a triple-double on Saturday.

Gary Harris fuelled the Nuggets past an undermanned 76ers with 21 points while Nikola Jokic added 15 points, 12 assists and nine rebounds in a 115-103 win.

Jamal Murray and Will Barton had 14 points apiece for the Nuggets, who broke open a close game after half-time. JaMychal Green and Monte Morris added 12 points apiece.

Rookie Tyrese Maxey led the Sixers with a career-high 39 points on 18-of-33 shooting while Isaiah Joe added 13 and Dakota Mathias had 12.

Rookie LaMelo Ball enjoyed a history-making triple-double while Terry Rozier scored 23 points as the Hornets stretched their winning streak to three games by defeating the Hawks despite P.J. Washington adding 22 points for Charlotte.

The 19-year-old guard played 31 minutes off the bench, and he was charged with only one turnover as he became youngest player in NBA history with a triple-double.

Patty Mills had 21 points as the Spurs followed consecutive victories in Los Angeles over the Clippers and Lakers with a steady performance at Minnesota when they had just six turnovers to 16 for Minnesota.

The Timberwolves will get their shot at revenge when the teams play again Sunday in Minneapolis.

CJ McCollum scored 12 of his game-high 37 points in a 19-8, game-opening run, propelling visiting Portland to a romp over Sacramento.

Damian Lillard contributed 17 points, while Enes Kanter added 11 points and 15 rebounds off the bench for Portland, who won their second straight game.

Marvin Bagley III had a team-high 15 points for Sacramento, who lost for the second straight night.

Tim Hardaway Jr enjoyed a season-best 36 points and Trey Burke added a season-high 29 to lead the Mavs to victory over the visiting Magic.

Hardaway made 8 of 13 three-point attempts to fall one short of his career high, while Burke was 7 of 8 from long range and ended one shy of his career best. Overall, Dallas were 20 of 40 from three-point range.

Nikola Vucevic registered 30 points and 15 rebounds for his seventh double-double of the season for Orlando, who lost their second straight game.

Mikal Bridges sunk 34 points and Devin Booker added 25 to lift the Suns to victory over the Pacers in Indianapolis.

Bridges, who had 15 points in the first quarter, made 12 of 18 shots from the field and 6 of 8 from three-point range.

Cameron Johnson sank four shots from beyond the arc to highlight his 16-point performance for the Suns, who posted their first victory at Bankers Life Fieldhouse since November 2016.

Malcolm Brogdon erupted for 22 points, Justin Holiday had 17 and Victor Oladipo added 16 for the Pacers, who missed a chance for their second three-game winning streak of the season

Tyler Herro scored a season-and game-high 31 points and grabbed nine rebounds as the Heat made it seven wins in their past nine meetings over the Wizards.

Despite missing their MVP Giannis Antetokounmpo, the Bucks held off Cleveland thanks to Khris Middleton’s 27 points while Bobby Portis added 17 points and 11 rebounds.

Antetokounmpo, the two-time reigning NBA Most Valuable Player, was a pre-game scratch due to back spasms, one night after taking a hard fall in the Bucks’ loss to the Utah Jazz.

Saturday marked the seventh consecutive game in which the Cavs failed to reach 100 points.