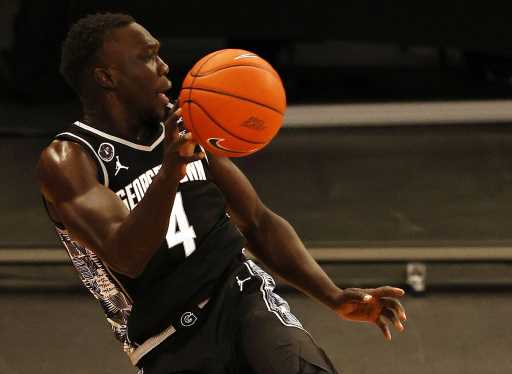 When the Nuggets invited the 6-foot-7 forward to their gym for a pre-draft workout, Bile was beside himself.

“I always watched the Nuggets growing up,” said the Georgetown senior. “I was a huge fan, and then when I found out (Monday) that I was coming for a workout, it was crazy, it was almost like a dream. Now that we’re done, it’s starting to kick in. I’m so thankful that I got this opportunity.”

Bile, who averaged 10.2 points and five rebounds in his lone season with the Hoyas, was among a group of six prospects Tuesday who played 1-on-1, 2-on-2, 3-on-3 and got ample shots up at Ball Arena.

“A lot of competing, a lot of going at it,” Bile said before his post-workout interview with team officials.

Bile said he didn’t have a feel for his draft range, but touted his defense and his positional versatility as strengths. Asked who his favorite Nuggets player was as a kid, Bile initially cited Kenneth Faried before mentioning Chauncey Billups and Allen Iverson.

And, like the rest of Nuggets fans, he watched closely as they stormed back in the Bubble, twice, from 3-1 deficits last postseason.

If Bile does get a chance in the NBA – be it with the Nuggets or any other team – he’ll have NBA legend Patrick Ewing to thank. Bile said Georgetown’s head coach was invaluable to him after he transferred from Northwestern State.

“I learned so much from him,” he said. “I could go on and on about stuff that he told us in practice, just little stuff that he’d tell us about being a pro and coming ready to work every day.”

Preston wasn’t recruited out of high school and only landed a scholarship to Ohio University after promoting his highlights on social media. This spring, he spearheaded an upset over No. 4 Virginia in the NCAA Tournament. The crafty, 6-foot-4 guard averaged 15.7 points, 7.3 rebounds and 7.3 assists this past season.

“The skills that I have can really translate to the next level,” he said, while acknowledging he needed to get stronger and become a more proficient shooter.

Preston has already surpassed any and all expectations others had for him. Now that he’s closer than ever to realizing his NBA dream, he said there was nothing about the pre-draft process he would take for granted.

Family matters: Arizona State’s Christopher said he has a pre-existing relationship with Nuggets point guard Monte Morris. Several years ago, he said Michael Porter Jr. sent him a pair of Puma’s. But before finishing his answer about his impressions of the Nuggets, his closest relationship dawned on him.

Christopher, a score-first guard, felt it would be a seamless fit if the Nuggets drafted him.