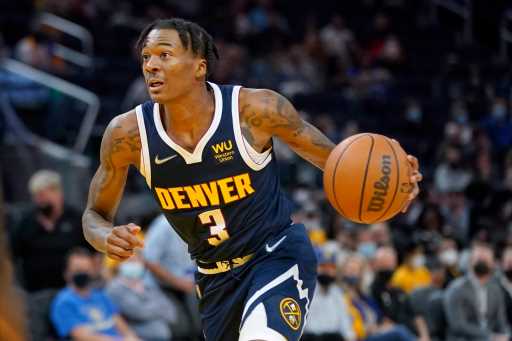 In the wake of Friday night’s Bones Hyland experience, Aaron Gordon verbalized what everyone was thinking.

“Youngin’s fearless, and I love it,” Gordon said. “His game is nice.”

With 21 points, eight rebounds, four assists and six turnovers in the overtime loss to Minnesota, Hyland’s all-encompassing night teased the potential while simultaneously revealing the growing pains to come before he cements himself a fixture in Michael Malone’s rotation.

If Friday night was any indication, though, that time could be rapidly approaching.

Moments after draining what appeared to be a dagger 3-pointer, putting the Nuggets up 101-99 with 10.5 seconds left in regulation, Hyland’s focus faltered and he allowed an uncontested dunk which sent the game to overtime.

After the game, Hyland admitted he thought the Nuggets were up three at the time, justifying his otherwise inexplicable decision. He said he heard someone say, “’Just let them get the layup,’” and also mentioned that he wasn’t in great position to read the scoreboard. Hyland, though, took responsibility for the gaffe – a costly rookie moment on a night where the 26th pick of the draft looked like a steal.

Displeased with the execution in the fourth quarter and overtime, Malone was nevertheless heartened by the teaching moments Friday’s game presented.

“Those experiences that Bones got tonight, those are invaluable,” Malone said.

That Hyland’s blunder, not to mention his six turnovers, came in the preseason, made them a bit more tolerable.

That they came alongside a blistering shooting showcase helped, too.

Hyland earned the second half starting alongside Nikola Jokic, P.J. Dozier, Michael Porter Jr. and Gordon. Less than a minute into the third quarter, Hyland already had the crowd buzzing. His first 3-pointer came off a transition corner look, the type the Nuggets have emphasized all preseason. The next one came off a selfless feed from Dozier, who absorbed attention, then kicked it back to Hyland for the open shot.

Next, Hyland again headed to the corner in transition, pump-faked, made the 3-pointer and coaxed a foul. Ball Arena erupted and was, in real-time, falling head over heels for their new rookie.

Hyland hit two more before the quarter was over, one that elicited some verbal jabs in the direction of Minnesota’s bench and another deep 3 in the grill of former Nugget Malik Beasley. To say Hyland’s confidence was soaring would’ve been selling the 21-year-old short.

Hyland was frustrated with the loss and even more frustrated with his turnovers. But what has been apparent all of training camp and throughout the first three preseason games is that Hyland belongs, and he knows it.

“(He) don’t look like a rookie,” Gordon said of Hyland’s competitive spirit and confidence.

What that means with two games left in the preseason is unclear. Malone made a point of calling out his reserves after an ugly showing. He said assuming anything about playing time would be a mistake. With both Austin Rivers and Facu Campazzo struggling, Hyland has an opening as an energetic, sparkplug scorer.

From this vantage point, he might even be in pole position, assuming the Nuggets can live with a few rookie mistakes.