The loss snapped a three-game winning streak by the Rockets, who were led by James Harden’s 19 points. But Harden made just seven of 19 shots from the floor and 4-of-12 from behind the three-point line.

Houston’s 80-point scoring effort was the lowest for an NBA team this season.

Watch the Bucks take on the Clippers via our free live stream on Saturday at 8:30pm

The Thunder were without Russell Westbrook for the second consecutive game after the All-Star guard suffered a sprained ankle in Monday’s win over the New Orleans Pelicans.

But while the Thunder looked lost at times without Westbrook during the season’s first two games as the point guard returned from offseason knee surgery, Oklahoma City used defensive intensity to find a way to win without him this time around, holding the Rockets to just 37.8 per cent shooting from the field. 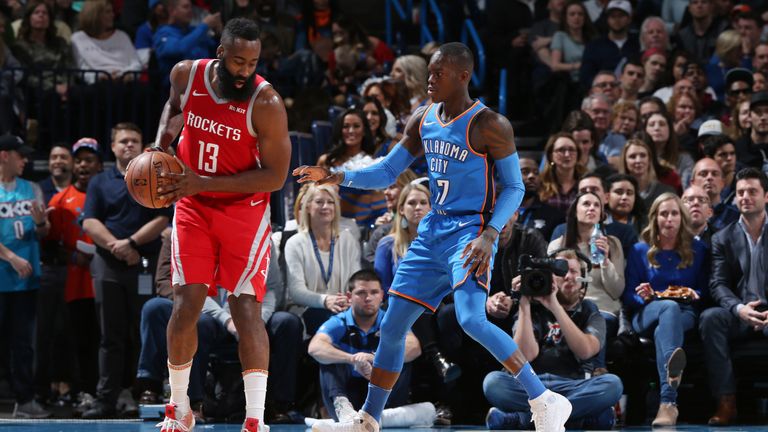 Oklahoma City closed out each of the first three quarters in strong fashion.

The Thunder scored the final 10 points of the first quarter to take a 29-19 lead early, then finished the second with a 21-6 run to lead by 14 at the break.

The third quarter was low scoring overall but Oklahoma City still outscored the Rockets 14-5 over the final seven minutes to take a 20-point lead going into the fourth.

The game was the first for Carmelo Anthony in Oklahoma City since leaving the Thunder in an offseason trade, which wound up with him being bought out and eventually signing in Houston. He scored just two points, going 1-of -11 from the field in 20 minutes.

Watch the Milwaukee Bucks take on the Los Angeles Clippers on Saturday at 8:30pm on a free live stream available on skysports.com and the Sky Sports app