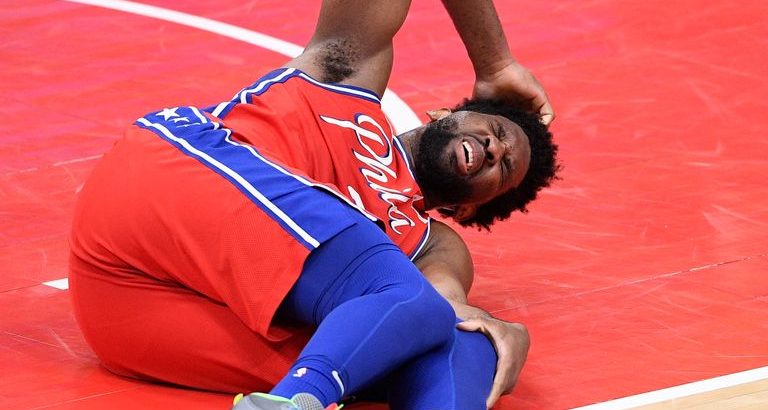 Philadelphia center Joel Embiid exited the 76ers’ Friday road game against the Washington Wizards in the third quarter due to a hyperextended left knee.

After throwing down a dunk, Embiid landed awkwardly on his left knee and remained on the floor for several minutes. A number of players surrounded Embiid with team trainer Kevin Johnson tending to him. The Athletic reported that he eventually limped to the locker room under his own power.

Philadelphia coach Doc Rivers said postgame, “He just fell awkwardly. I thought there was a little contact when he went up to dunk the ball. I thought he fell with his balance off.

“I’m not going to speculate. [Saturday] we’ll have all the information for you. I’m hoping for the best. I did talk to him; he was in the locker room. He was in pretty good spirits, so let’s just hope for the best.”

Embiid was back in action Friday after missing the NBA All-Star Game on Sunday and the 76ers’ first game after the break Thursday because of COVID-19 contact tracing protocols.

The four-time All-Star was in the starting line-up at Washington after quarantining for the past seven days and receiving a lab-based PCR negative result earlier Friday, marking his seventh consecutive day of negative tests.

Team-mate Ben Simmons, an All-Star point guard, has not yet been cleared to return, needing one more day of clean testing in hopes of being cleared by Saturday.

Embiid and Simmons reportedly both were exposed to a barber in Philadelphia who tested positive for the coronavirus early Sunday. Neither player had contact with other All-Stars upon arriving in Atlanta for All-Star weekend.

In the Sixers’ first game after the All-Star break on Thursday at Chicago, Philadelphia routed the Bulls 127-105 despite playing without both Embiid and Simmons.