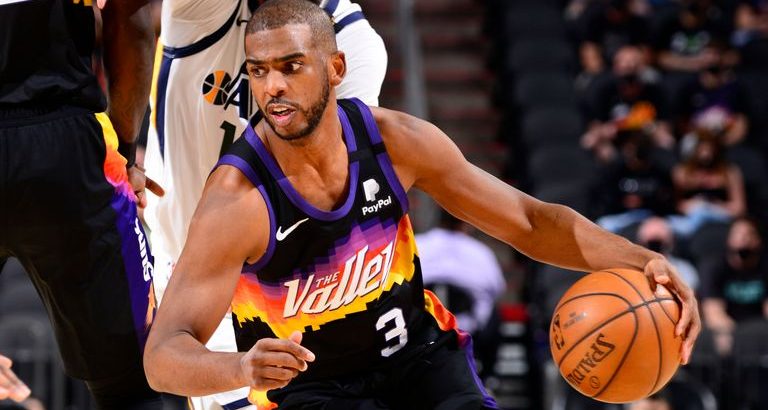 Devin Booker and Chris Paul led the Phoenix Suns to a 117-113 overtime win over the visiting Utah Jazz on Wednesday night in a game between the NBA’s best two teams that lived up to its billing.

Booker scored 35 points and Chris Paul contributed 29 points and nine assists as the Suns, who have the NBA’s second-best record, held on for their seventh victory in a row.

Booker got the Suns off to a quick start in OT with a layup, and Paul finished it off with free throws late in the extra session. Utah never led in overtime.

Deandre Ayton also had a strong showing with 18 points and 12 rebounds for Phoenix, which picked up its second win in two meetings with the Jazz this season.

Donovan Mitchell registered 41 points and eight rebounds for the NBA-leading Jazz, and he forced overtime with a clutch 3-pointer late in regulation. Bojan Bogdanovic scored 20 points and Rudy Gobert tallied 16 points and 18 rebounds for the Jazz, who have lost two in a row on the road after a nine-game winning streak.

Phoenix’s offensive rebounds (16) and the Jazz’s poor 3-point shooting (11 of 44) were key factors on a night when every possession mattered.

Kevin Durant played for the first time in nearly two months and was one of seven Brooklyn players to score in double figures as the host Nets routed the New Orleans Pelicans 139-111.

Durant, who last played on Feb. 13 and missed 23 consecutive games because of a hamstring injury, didn’t enter the game until the second quarter was nearly halfway over. He scored 17 points, making 5-of-5 field goals, 2-of-2 3-pointers and 5-of-5 free throws in 19 minutes.

The Nets outscored the Pelicans 43-26 in the second quarter to take command and coast to their ninth consecutive victory at home. Brooklyn led by as many as 38 points.

Eric Bledsoe led New Orleans with 26 points despite being ejected after receiving two technical fouls late in the third quarter.

Zion Williamson scored 16 points on 4-of-12 shooting to end his streak of 25 consecutive games with 20-plus points on 50 percent shooting or better, which tied Hall of Famer Shaquille O’Neal’s record. Lonzo Ball added 15 points and Jaxson Hayes and Isaiah Thomas had 11 each.

Nikola Jokic finished with 25 points, 10 assists and nine rebounds to help the surging Denver Nuggets to a 106-96 victory over the San Antonio Spurs in the first of a two-games-in-three-days mini-series between the teams in Denver.

The game was the second of a home back-to-back for the Nuggets, who rolled past Detroit on Tuesday, and they looked the worse for the wear early on.

Denver trailed late in the second quarter before finding its stride, opening up a huge lead midway through the final period and winning its seventh straight contest.

Michael Porter Jr. added 18 points and 10 rebounds and Will Barton hit for 14 points for Denver.

Dejounte Murray and Derrick White led the Spurs with 18 points each, with DeMar DeRozan scoring 14 and Patty Mills adding 12 off the bench. San Antonio has lost four consecutive games and nine of its past 11.

Marcus Smart hit the tiebreaking 3-pointer with 36.4 seconds left, and he scored 14 of his 17 points in the fourth quarter as the host Boston Celtics snapped a seventh-place tie in the Eastern Conference by coming back to beat the New York Knicks 101-99.

Smart was just 1-of-7 from the field before he teamed up with Jaylen Brown (seven points) and Jayson Tatum (seven points) to score the final 28 points for the Celtics, who trailed by seven early in the fourth before winning for the third time in four games to improve to 26-26.

RJ Barrett was 6 of 6 from 3-point range and scored 29 points for the Knicks, who lost for the fifth time in six games. Julius Randle had 22 points and nine rebounds while Derrick Rose added 11 points off the bench.

Grayson Allen poured in a season-high 30 points to help the Memphis Grizzlies roll to a 131-113 victory over the host Atlanta Hawks on Wednesday night.

Bogdan Bogdanovic scored 24 points and Trae Young 14 points and 11 assists for the Hawks, who had a four-game winning streak snapped.

Bradley Beal scored 26 points on 11-of-19 shooting to lead the Washington Wizards to a 131-116 victory over the Magic in Orlando.

Beal, who also had five assists, returned to the Wizards’ line-up after missing the previous five games with a right hip contusion. Washington snapped a four-game losing streak and a six-game skid against the Magic, who lost their third in a row.

Russell Westbrook, who finished with 23 points, 15 assists and 14 rebounds, recorded his 20th triple-double of the season and his fifth in the past six games.

Aaron Holiday scored 22 points off the bench and his brother Justin Holiday added 21 to fuel the Indiana Pacers to a 141-137 victory over the Minnesota Timberwolves in Indianapolis.

Karl-Anthony Towns recorded 32 points and 12 rebounds and rookie Anthony Edwards added 27 points for Minnesota, which failed in its bid to win back-to-back games for the first time since emerging victorious in its first two contests of the season.

Ricky Rubio and D’Angelo Russell each had 17 points and Naz Reid added 16 for the Timberwolves.

Kelly Olynyk scored 10 points and pulled down a career-high 18 rebounds to help the Houston Rockets hold on for a 102-93 victory over the visiting Dallas Mavericks.

Olynyk grabbed two critical rebounds down the stretch after his three-point play gave the Rockets an 89-84 lead with 3:38 to play.

Luka Doncic drew the Mavericks even 63 seconds later before Olynyk corralled an offensive rebound that yielded a John Wall layup. When Doncic missed a 3-point attempt on the other end, Olynyk crashed the glass and Wall followed with a three-point play that lifted the Rockets to a 94-89 lead.

Jalen McDaniels scored a career-high 21 points to lead the Charlotte Hornets to a 113-102 win over the Oklahoma City Thunder in Oklahoma City.

McDaniels hadn’t scored more than 11 points in any of his first 40 NBA games over the last two seasons. He finished 9 of 14 from the floor.

The Hornets have alternated wins and losses over their past seven games. The Thunder have dropped four consecutive games and seven of their last eight.

What a night for @aleksejpokusevs 📊

Career-high 25 points, becoming the 4th rookie in OKC history to score 25+ in a game

Nearly half of the Thunder’s scoring came from its two teenagers as Pokusevski and Theo Maledon each finished with 25 points. Maledon scored 14 of his points in the fourth quarter and was 9 of 18 from the floor. Pokusevski was 9 of 14 and 7 of 11 from behind the 3-point line to set a Thunder rookie record for 3-pointers in a game.