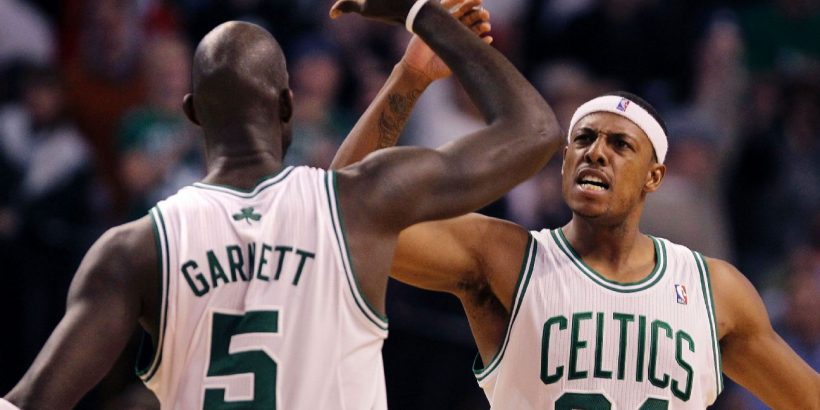 Pierce, along with two-time champion and 11-time All-Star selection Chris Bosh, five-time All-NBA selection Chris Webber, and four-time Defensive Player of the Year Ben Wallace, headlined the 2021 class. The honor was announced the day after Garnett, Duncan and the late Kobe Bryant were officially inducted as part of the 2020 class, which saw its entry delayed because of the ongoing COVID-19 pandemic.

Pierce, alongside Garnett and Ray Allen, led the Celtics to the 2008 NBA title, along with winning Finals MVP that same year. He finished with 10 All-Star appearances, four All-NBA team selections and scored over 26,000 points across his 19 seasons with the Celtics, Brooklyn Nets, Washington Wizards and LA Clippers.

Bosh, who was drafted fourth overall by the Toronto Raptors in 2003, spent seven years with Toronto before joining the Miami Heat as a free agent in 2010, teaming up with LeBron James and Dwyane Wade to win championships in 2012 and ’13 and make four straight NBA Finals. He also won a gold medal with Team USA in 2008, though his career was cut short by blood-clotting issues that caused him to have to retire in 2017 while still in the prime of his career.

“It was short-lived, in my opinion,” Bosh said, when he thinks about his career. “I wanted to play a lot longer, unfortunately it came to an abrupt end. But just looking back on everything I was able to accomplish, all the friends I was able to make, the connections I made, all the memories we were able to make together, that’s what’s most important.”

After being part of one of college basketball’s iconic teams as the top recruit of the “Fab Five” to attend the University of Michigan, Webber, the No. 1 pick in the 1993 NBA Draft, was the a five-time All-Star, five-time All-NBA selection and was the NBA’s Rookie of the Year in 1994. His best years came playing for Adelman with the Sacramento Kings from 1998-2005, when he helped lead the Kings to the seven of the 10 playoff appearances they’ve made in the 36 years they have been in Sacramento – and all four times they have won a playoff series.

Wallace, who went undrafted out of Virginia Union in 1996, developed into one of the best defensive players of all-time, and was the anchor of the great Detroit Pistons teams of the 2000s that won the title in 2004 and made it to six consecutive Eastern Conference finals. He is tied with Dikembe Mutombo for the most Defensive Player of the Year honors (four) in a career, while he made four All-Star teams, five All-NBA teams and five All-Defensive teams during a career that also saw him play for the Wizards, Orlando Magic, Chicago Bulls and Cleveland Cavaliers.

Adelman made it to two NBA Finals and won more than 1,000 games as a coach with the Portland Trail Blazers, Sacramento Kings, Houston Rockets and Minnesota Timberwolves, while Wright has lifted Villanova back to the top of the college basketball world, winning two titles and three Final Fours during his time in Philadelphia.

“It’s pretty amazing,” Wright said. “You showed the picture of all those guys — Bill Russell, KG, Chris Webber — and just to be hanging with these guys right now and listening to their stories and being part of the Hall wth them, and this class, it’s nothing you’d ever even dream of. It’s pretty cool.”

Russell, obviously one of the greatest players of all-time, won a pair of titles as a coach with the Boston Celtics in the late 1960s. Jackson was a three-time MVP and winning two championships with the Seattle Storm, while Yolanda Griffith was the 1999 WNBA MVP and led the Sacramento Monarchs to the title in 2005.

“I’m very, very proud just to be given an opportunity,” Griffith said of her time in the WNBA. “I got drafted in ’99, number two pick to the Sacramento Monarchs, and it was a joy because that gave me an opportunity to be back home from playing over in Europe and gave my family a chance to see me play, finally, on the professional level, and just enjoy playing at that level on the highest level, basically. I enjoyed the ride with the Sacramento Monarchs.”