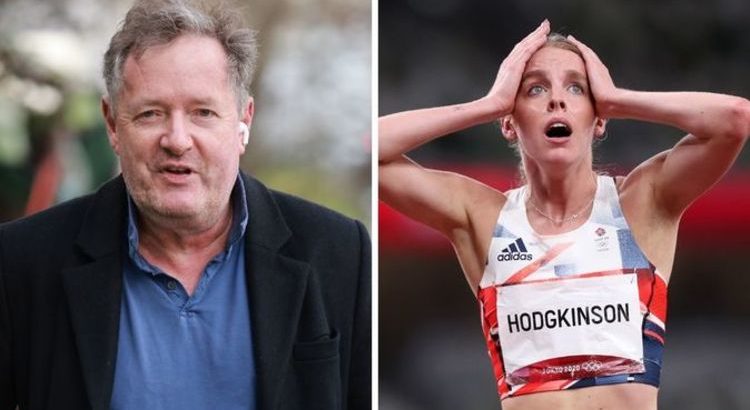 Tokyo 2020: How are Team GB doing compared to Rio and London?

Keely Hodgkinson has fired back at Piers Morgan after he played down her 800m silver medal at the Tokyo 2020 Olympic Games. Morgan suggested Hodgkinson was a loser on social media, despite an incredible run that broke the British record.

Hodgkinson looked shocked as she crossed the finish line and realised she had secured silver to round off a sensational breakthrough season.

In March, ahead of the Olympics, she became the indoor 800m champion before beating Jemma Reekie and Laura Muir at the British trials earlier in the summer.

Despite Hodgkinson’s tremendous achievement in Tokyo, Piers Morgan took to Twitter on Tuesday with a negative reaction.

Responding to a viewer calling him out for his definition of a ‘loser’, he tweeted: “I’m sorry that facts make you vomit.

“Self-evidently, if you don’t win a race, you lose it. And Keeley lost to someone the same age as her.

“But great to see her break the British record, and I hope she now works even harder and wins gold at Paris in 2024.”

Morgan’s tweet riled fans, who confronted him in the comments section for his efforts to ‘belittle’ her stunning achievement.

A few hours later, the teenage athlete herself responded to Morgan with a short-but-sweet tweet of her own.

She made sure to correct his mistake, stating: “Keely*.”

Morgan swiftly apologised to Hodgkinson for misspelling her name in his initial tweet.

However, he made sure to suggest that despite adding to her phenomenal year with a silver medal, she would’ve wanted more.

“Great run today, but I’m sure you share my view that winning would have been even better.”

The Team GB Olympian is yet to respond and invite further buzz around Morgan’s comments and is probably unlikely to do so.