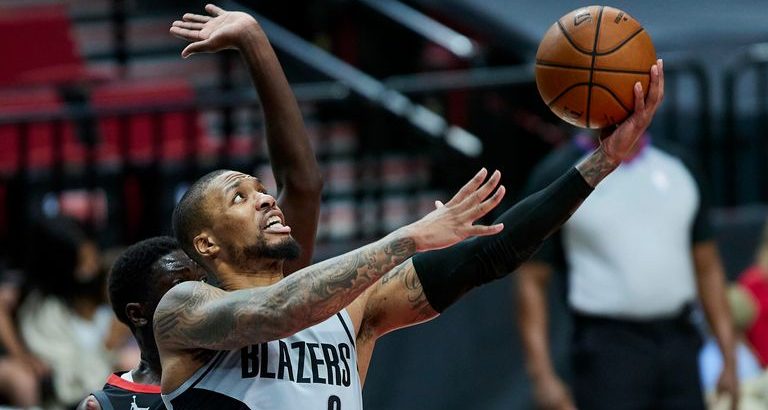 The Utah Jazz and Portland Trail Blazers know they are both going to be in the postseason, but neither team quite knows what spot they will be in just yet.

The picture is a bit clearer for the Jazz (50-19) as the teams enter their Wednesday night matchup in Salt Lake City.

Utah can clinch the No. 1 overall seed if they get past Portland, Oklahoma City and Sacramento in the stretch run. The Jazz will finish no lower than No. 2 in the Western Conference if other scenarios with the only other top-seed contender, the Phoenix Suns (48-20), play out.

Portland (40-29), meanwhile, can end up in the preferred fifth or sixth positions or in the dreaded No. 7 spot in the West. The latter would require the Trail Blazers to participate in the four-team Play-In event for an opportunity to secure one of the final two spots in the West playoffs’ main draw.

The Blazers would stave off the Los Angeles Lakers (38-30), currently in the No. 7 position, and avoid the Play-In with two wins in their final three games. Only problem? Portland play in Phoenix on Thursday night after a back-to-back visiting Utah, and the Blazers host the playoff-bound Denver Nuggets in Sunday’s regular-season finale.

“I love it,” Portland’s Norman Powell said when asked about the playoff race.

“We control our own destiny and I love that. I’ve been a part of that in Toronto multiple times, even in the playoffs, it’s nothing new to me. I’m looking forward to these last three games.”

The Blazers have won four straight and eight of nine to put themselves in an enviable position.

On the not-so-bright side, Utah has beaten Portland by an average of 19.5 points in their first two meetings this season, taking the season opener in Portland on December 23 and another matchup in Salt Lake City on April 8.

The Jazz are coming into this game having had their five-game winning streak snapped at Golden State on Monday night.

After holding red-hot Stephen Curry to 10-of-24 shooting, including 2-for-12 from three-point range. for most of the night, the superstar guard drained a game-deciding three-pointer in the final seconds of the Warriors’ 119-116 victory.

“I thought the half-court defense did a really good job containing Steph and these guys,” Jazz center Rudy Gobert said after scoring 10 points and grabbing 16 rebounds.

“It comes down to the details. I think it was a good test for us. We came up short. We might see them again.”

Once again, the Jazz played without injured All-Star guards Donovan Mitchell and Mike Conley. Even so, Utah had a chance to win, including owning a late lead, thanks to Jordan Clarkson’s 41-point explosion and 27 points for Bojan Bogdanovic.

Mitchell (ankle) and Conley (hamstring) will sit out the Trail Blazers game, too, and the Jazz announced Mitchell will not return in the regular season.

Portland scored a franchise-record 50 points in the first quarter of its 140-129 win over Houston on Monday. The Blazers were led by Damian Lillard, who had 34 points, nine rebounds and six assists. Powell and CJ McCollum each chipped in with 28 points.